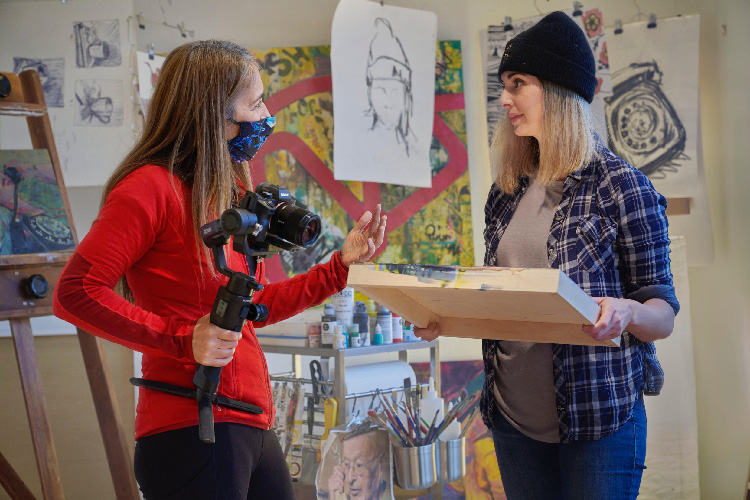 By Nikkey Dawn November 17, 2020
Share
Share on Facebook Share on Twitter Pinterest Email
Update November 18, 2020: Due to the most recent COVID-19 health advisory, WFF has made the decision to move fully online. Anyone who has purchased a ticket for in-theatre screenings is invited to connect with the WFF box office at registration@whistlerfilmfestival.com for a ticket package upgrade, exchange or refund to watch films online.

This year’s Whistler Film Festival (WFF) promises to be nothing like years past. The theme is Vision is Everything 20/20, with a nod to the champagne birthday, or anniversary rather, of Canada’s Coolest Film Fest. Following the 20 theme, the festival has been extended to 20 days, December 1 – 20, 2020, giving you all the more time to take in the 89 plus films on offer, including 30 features and 57 shorts.

It’s no secret that the COVID-19 pandemic has challenged events to adapt and WFF has more than risen to the occasion. With Canada-wide online, on-demand film screening and worldwide event streaming, the festival will be available to a larger audience than ever before. Proving that vision is something WFF has in spades.

CANCELLED: In-Theatre tickets are $20. Whistler screening dates are December 3 – 6, 2020 at the Maury Young Arts Centre. Physical distancing guidelines will be in place, with the capacity currently limited to 50 seats per show (note that these details could change as they adjust to the health guidelines at the time). Anyone who has purchased a ticket for in-theatre screenings is invited to connect with the WFF box office at registration@whistlerfilmfestival.com for a ticket package upgrade, exchange or refund to watch films online.

Online tickets are $15 and you’ll have 24 hours to view a film after you order it. Online viewing is only available in Canada and all films will be online until December 31. If you want to watch multiple films, Ticket Packs offer you the most savings, with 3, 6, 10 and 20 film access options. More info

There are also Industry Passes for film professionals and an Insider Pass available for those who want to have access to everything and support WFF at the same time (virtual high fives from us included).

Awards Celebration, December 20, free. The WFF’s Awards Celebration honours the talent and films featured in its eight juried competitive sections with 16 awards and over $40,000 in cash and prizes to be awarded. More info

In place of in-person events, WFF is offering the online Content Summit, featuring 36 interactive sessions, masterclasses, panel sessions, pitching workshops and networking opportunities with over 100 industry guests. The Content Summit will be available worldwide as a way to keep the international film community and aspiring filmmakers, who would otherwise gather in Whistler, connected. Content Summit Schedule.

New this year, WFF has launched a showcase called Sea to Sky Shorts, a regional film competition that aims to highlight local talent.

The filmmakers have only 20 days to shoot and everything must be filmed within the Sea to Sky region. We caught up with three out of the 13 filmmaker teams to get a glimpse of what we can expect to see and how the rules of the showcase are pushing them creatively.

WF: Without giving too much away, the film will involve disc golf and music in major ways. The main inspiration behind this was picking a film topic that is important to our entire crew. By picking a topic that matters to all of us, we are ensuring we all stay motivated and excited throughout the entire process, especially with the tight deadlines.

Additionally, we feel that disc golf deserves more attention than it gets as a legitimate recreational activity in the Sea to Sky region. Through our film, we hope to spread awareness of the sport and even inspire people to try it out for themselves!

What excites, or challenges, you about the catch of only having 20 days to film and being confined to the Sea to Sky region?

WF: To be honest, it’s nice having these kinds of deadlines and restrictions. It keeps us focused and keeps things simple. It’s too easy to have a film project stay in the ideation phase far too long. For this project, we can’t spend too much time trying to come up with the perfect idea, rather, we have to balance our time effectively between all phases of the project.

This means keeping the plot relatively simple and making sure we have enough time to capture footage and edit the film. On another note, confining the location to the Sea to Sky region has allowed me to reflect on how grateful I am to be living in such a beautiful part of the world – all of our filming location options are visually stunning!

Is this the kind of film you normally work on? Are you pushing your skills or learning anything new for it?

WF: There are some creative and technical aspects of this film that I am familiar with, but for the most part, it is a new kind of film that I don’t have much experience creating. My cousin from Squamish, Noah Parry (who is helping with the filming and editing), and I are taking this opportunity to really push our skills and try out new kinds of shots and cuts in the edit. I’m also working with a drone for the first time (courtesy of Noah) which I’m really excited about.

In terms of the look we are attempting to create, there doesn’t seem to be a lot of video content on disc golf beyond documentary-style footage and homemade skits, meaning there will be a lot of experimenting done in an attempt to capture the sport in a more exciting and dramatic fashion – much like the style of cinematography used to portray many of the other sports around here.

JB: My film, Please Try Again, is about an agoraphobic artist who, like most really talented artists, struggles with being on the edge of depression and creative genius on a daily basis. It is an artsy, quirky experimental film starring local Whistler artist, Feral Nifty.

Feral and I met in an improv class, and after a late night brainstorm, this little film idea emerged. The narrative is NOT Feral’s personal story, it is a quirky, fictional story that I wrote inspired partly by Feral’s art and partly by the creative struggle that many artists I know are going through right now.

You mention the creative struggle many artists are going through right now, is this in relation to the pandemic and the societal shifts of this year?

JB: Absolutely! Many artists work by themselves and they are used to that, but they also need human contact like everyone else and if they don’t get it, they go even further inside their heads. The further they go in, the harder it is to come back out.

Although my film is fictional, the emotional turmoil that my protagonist goes through definitely pulls from some personal realities that were intensified during the pandemic.

How do you feel when you’re shooting, what draws you to filmmaking?

JB: Honestly, I think I feel the most alive when I’m on a shoot. Especially on small productions where you have so much creative freedom to experiment on the fly. Filmmaking has all of the elements that make me happy. It’s incredibly collaborative, you get to play with composition, light, sound, colour and weave it all together with an interesting narrative.

It’s a giant creative puzzle with hundreds of creative options to choose from and even more possible outcomes. It’s a bit like gambling because you’re never really sure how it will turn out until the end. I guess you could say, it’s the perfect medium to push me out of my comfort zone, which is a very exhilarating place to be.

AP: Our film, Nature Entwined, is a visual love letter to womanhood and how it’s intimately intertwined with the Squamish landscape. The two cannot be considered separately. Living in Squamish, we have access to incredible landscapes and are privileged to connect with nature every day!

As women ourselves, our team is exploring how we connect with nature, how we grow with it and how we show respect towards it.

How have both the time and location restrictions shaped how you approached this film?

AP: The time restrictions have forced our team to work efficiently. Myself, Krista Rand and Lauren Bridle (all producers) are on a group chat, constantly bouncing ideas off each other and prepping different aspects of the shoot.

Our poet, Savanna Jones-Martin, has been working on multiple versions of our poem / script and is updating it based on our ideas and feedback. I’m so grateful – it’s truly a collaborative effort!

What does it mean to you to be a part of this community-focused showcase? Is community an important part of filmmaking?

AP: I am in awe of the Sea to Sky community. Our team is excited to be included and to showcase some of the inspiring women who call Squamish home.

Come for the films, stay for the winter wonderland. Whistler is abound with thrilling things to do in between screenings.

It’s shaping up to be a La Niña winter so you know the skiing and boarding are going to be amazing. Make sure you remember to secure your on-mountain days through the new Whistler Blackcomb pass holder reservation system and plan to adventure differently in Whistler this winter.

If you prefer to spend time off the slopes, take to the skies on a ziplining tour or get out into the backcountry on a snowmobile. Looking to relax or feeling a desire to indulge? Soak in the beauty of the Pacific Northwest at the Scandinave Spa or explore the art of charcuterie at some of Whistler’s creative eateries.

Whatever your pace, pairing the arts and the outdoors is Whistler in essence. Find more winter activities and take the time to read up on what you need to know before you go.

Book your lodging for the Whistler Film Festival on Whistler.com.

Know Before You Go: Skiing and Snowboarding at Whistler Blackcomb