Are you feeling stoked for the upcoming winter season? The countdown is on, and the excitement is palpable in Whistler as opening day on Whistler Blackcomb draws closer (November 25, 2021) and snow begins to fly.

Here are some things you can do to get your stoke on for this winter season!

The silver lining to the copious amounts of rain typically falling in Whistler at this time of year is that it’s likely snowing up top. If you live in Whistler, you can watch that snowline make its way slowly down the mountain, but if not, you can always creep on the mountain tops via some handily placed Whistler webcams.

The team at Whistler.com, Whistler’s locally-based travel consultant team, starts their shifts with a minute wall sit and then does them sporadically throughout the day. Why? Winter stoke. Those lower body workouts are a must if you’re hoping to avoid the dreaded thigh burn on opening day.

Take a look at our Insider’s Guide to Tuning Up for the Winter for a checklist approach to getting ready for the ski and board season. You could also take a look at this video from the Insider vault (enjoy the outfits).

They say a bad worker blames their tools, so make sure you have the right tools to work the mountains this winter. Take a look at your hard goods, check edges, bases, bolts and screws. Then tackle the soft items, likes jackets and pants; any holes, sticky zippers, need another waterproofing wash? Local Insider, Megan Wilson, goes through a more detailed checklist in Insider’s Guide: Tuning up for the Winter Season.

This year, the weather forecasters are calling for a double-dip La Niña. This is exciting for snow enthusiasts because it typically means a wetter and colder winter (in layman’s terms, La Niña = more snow). We took an in-depth look at this beloved weather system last year in La Nina is Coming to Whistler: Here’s Why We’re Excited.

If you want to continue following snow stats this season, take a look at our post on which apps are handy to have on your phone so that you can stay ahead of the pow!

5. Watch Skiers and Snowboarders on the Big Screen

October and November are the best times to watch some snow action on the big screen, knowing that it’s not too long until you’ll be hitting the slopes. It’s the best kind of stoke builder, even if the unnatural double cork 1260 you saw being stomped on-screen is maybe not on the cards for you this season. The Maury Young Arts Centre and Rainbow Theatre are two places that these screenings typically take place, although Whistler’s bars also have stoke nights showcasing the latest ski and snowboard reels too.

We’re lucky in Whistler that the nearby coastline keeps the temperature moderate, so we don’t get the crazy cold temps they suffer from farther into the interior. You can expect a -5°C (22°F) average daily alpine temperature during most of the winter months – balmy! You can prep your body for those colder days by doing some cold plunges, which are great to get the blood flowing.

You could opt for an icy lake (please be careful, don’t go alone and make sure you know how to do it safely), but our choice would be the more controlled environment of the Scandinave Spa, with a hot pool on hand to warm up in!

7. Praise a Norse God (make sure it’s the right one)

For years skiers and snowboarded have turned to the Norse god Ullr, asking him to bless them with copious amounts of snow – but they’ve accidentally been asking the wrong person. Insider, Nikkey Dawn, dug into Norse mythology and found that the goddess Skaði (pronounced skahd-ee), is referenced as the ski-goddess in The Story of Odin. She is said to rule over winter and mountains, and not unlike the skiers and snowboarders of today, refused to conform to societal standards. So, if you’re going to praise anyone this winter season, go for Skaði!

Feeling a bit more stoked? Come to Whistler – the snow is waiting.

Book your winter holiday with Whistler.com Whistler.com today to secure the best rates for the winter 2022/23 season (save up to 45% on lodging and 61% on lift tickets). It's easy to book your vacation when you have the freedom of our Flexible Cancellation options backed by our Book With Confidence program.
Skiing & SnowboardingWinter

Outdoor Activities off the Slopes 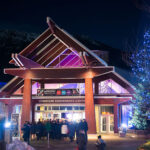