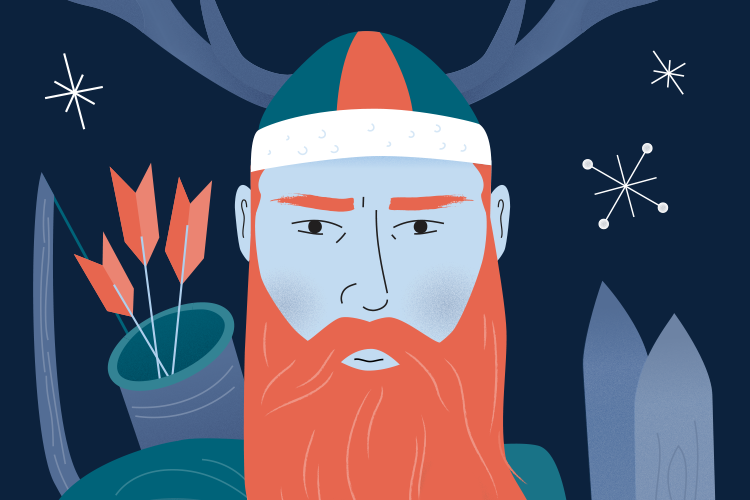 Spend enough time in Whistler in the winter and you’re bound to hear someone say “praise Ullr” or “pray to Ullr”, depending on the snow conditions. Pronounced “ool-er”, we wouldn’t blame you for wondering if we’ve been at après for too long. But, we are in fact making sense (well, sort of – but more on that later), Ullr is a Norse god, son of Sefi and stepson of Thor.

So, who exactly is Ullr and how did a Norse god get here?

Ullr is a Norse god often associated with winter, skiing and snow sports. Many people refer to him as the God of snow or God of skiing, but according to the Prose Edda, a historical text used by scholars of Norse mythology, Ullr was never given a “God of” title for anything. However, he is recognized for being a skilled skier and hunter, and he is often depicted on skis with his bow. It is even said that the aurora borealis, which dance across night skies in the Northern hemispheres, are the spray from his skis. So, it’s easy to see how some skiers, who may have in fact been at après for too long, came to inflate his status.

But, this is not to say he was unimportant. In 2007, an ancient shrine to Ullr made up of 65 rings, was found in Sweden and further proved a theory that he was a god who would watch over a vow. Oaths were made by swearing over a ring. Ullr translates to glory or splendor and he was called upon for good luck in combat, hunting, fishing and any kind of winter sport competition. Some say he may also be called on for safety in the snow and while climbing mountains.

Through a historical poem, a Danish historian uncovered that Ullr was once left in charge of the other gods while Odin was in exile. So, while we can safely assume he had some status, experts struggle to find much on him. If he was a more prominent god, the texts that survived the ages do not show it. One paper I read on Ullr referred to him as “a god on the edge of memory”; perhaps that is why it was so easy for North Americans to appropriate him into their own ski culture, making of him what they wanted.

Along with skis and bows, Ullr is often depicted with a shield that has been referenced as a “ski board.” He may not be the God of skiing, but could he have been the original snowboarder?

Is There a God of Skiing?

There is no known God of Skiing in Norse mythology, but there is a Goddess! Enter Skaði (pronounced skahd-ee), who is referenced as the “ski-goddess” in The Story of Odin. She is said to rule over winter and mountains, and not unlike the skiers and snowboarders of today, refused to conform to societal standards. Skaði was a giantess who lived “where the snow never melts” and became a goddess after storming Asgard to avenge the death of her father. As a peace offering, Odin offered her a god to marry, but she had to choose her beau by only looking at their feet. A practical giantess, she chose the guy with the best boots and thus became married to Njord, who ruled the sea. She hated being on the water and away from the mountains, so she eventually divorced him and returned to land where she may or may not have married Ullr. Or Odin. It’s unclear.

But like Ullr, she is often depicted skiing or snowshoeing with a bow and was also a skilled huntress. So, perhaps they bonded over common interests, or he learned all he knew from her. Some believe it was Skaði who taught people how to make skis. Because of the location of Skaði’s cult in the Northern province of Hålogaland (a region where Scandinavian and Sami people lived in close proximity to one another) and the characteristics she possesses, there are scholars who think she is a link between the Nordic and Sami mythologies. This would make sense as the Sami are credited with the invention of skiing in Europe (early evidence of skiing has also been found in Russia and Northwestern China, it’s not agreed upon whether skiing has a single origin or was developed independently in several places). The Sami are the Indigenous Peoples of a region encompassing what are now parts of Finland, Sweden, Norway and Russia. They have one of the oldest living cultures on earth.

Skaði’s name means harm or shadow – she doesn’t sound like someone you’d want to be on the bad side of. However, that’s probably where we are now for not crediting her as the rightful deity of skiing. It’s tough to say why “worship” of Ullr began in North America instead of Skaði. Skiing was a male-dominated sport, in a patriarchal society at the time it all began here, so maybe a male icon was preferred by the majority of skiers. Or, it all got lost in translation – probably at après.

CULTURAL INSIGHT: We checked in with the Squamish Lil’wat Cultural Centre (SLCC) to see if there are any snow figures or deities in the Sk̲wx̲wú7mesh and L̓il̓wat7úl cultures. While there is nothing specific, there is a Squamish Nation legend called The Great Snowfall in which the Great Spirit uses an extreme snowstorm as punishment against the people. Look it up or ask about it on your next visit to the SLCC!

How Did Ullr Get to North America?

Breckenridge, Colorado has been throwing Ullr Fest since 1964. Their website states, “Shortly after Breckenridge Ski Resort was founded, local legends, Sigurd Rockne and Trygve Berge, created the first Ullr Dag festival. The festival came about because the majority of the ski school instructors were Norwegian and had a long tradition of celebrating Ullr, the Norwegian god of snow.” (You hear that Skaði? You can blame Breckenridge!) It’s likely that it spread to other ski resorts from there, as skiers resort hopped and shared superstitions for appeasing Ullr during periods of poor snowfall.

Breckenridge’s credit to Norwegian instructors had me reach out to a friend who is an avid skier in Norway, she said she’d never even heard of Ullr, even though many of their races celebrate and honour their legends. She was surprised to hear of his popularity in North America and pointed out he may hold less prominence in Scandinavia because their history of skiing is older. It would be easy for a god, who is not actually the god of skiing, to get lost among all of the chronicles and characters.

Although the Whistler Museum’s donation-based collection on Ullr is slim, a board member recalls the first event held in the name of Ullr being in 1974. At The Keg, a person dressed up as Ullr went around the tables to greet and entertain diners. Around the same time, the Whistler ski community started a tradition of burning old or busted up skis as a sacrifice to Ullr. The museum recently put a call out on Facebook in hopes of nailing down a more detailed timeline, but it mostly resulted in locals reminiscing about good times had at the ski burning parties. We did however, find this rad (2009) video from the Whistler Blackcomb archives . . .

Why all of the burning? Well, other than the fact we love a good fire, Ullr is one of the gods a sacrifice called a “blót” was made to during Winter Nights (the first three days of winter in medieval Scandinavia). Sacrifices could be made outdoors or at a temple and traditionally would have included things like ale, mead and animals. Modern day pagan worship of Ullr in Northern Europe is largely tied to the Feast of Ullr, which is focused on the blessing of hunting weapons and one last big hunt before winter. With the coldest and darkest days of winter on the way, Skaði is often honoured at the feast as well.

I don’t know who decided Ullr would want wrecked skis instead of a nice meal, but thankfully the tradition in Whistler ended when the negative environmental impact was pointed out. Over the years, celebrations have included the Whistler Blackcomb Ullr Party, which ran for a few years and had fireworks, fire dancers and a series of after-parties, Nordic sport seasonal kick-offs at Whistler Olympic Park and an ironically named If Ullr was a Girl ski and snowboard contest.

This year, Whistler artists are competing to design and develop a throne for Ullr that will become a public art piece in Creekside. State of the Art and Capital Zed are the organizers of the project and they estimate the final piece will be revealed at the start of the 2021/22 winter season.

There’s a tale that Ullr crossed the sea using only his shield. By shield or by ski instructors, he certainly made his way here to become an icon, bond skiers and boarders during good snowfall and bad, and offer a connection to something larger than ourselves. Like many of us, maybe he needed to leave his homeland to find a sense of belonging. Either way, next time you pour out a shot, offer prey, praise or party in Ullr’s honour, include Skaði too, will ya?

Want to discover more mountain culture? Check out these posts, or better yet, come experience it for yourself! Whistler.com has all you need to plan your trip today.