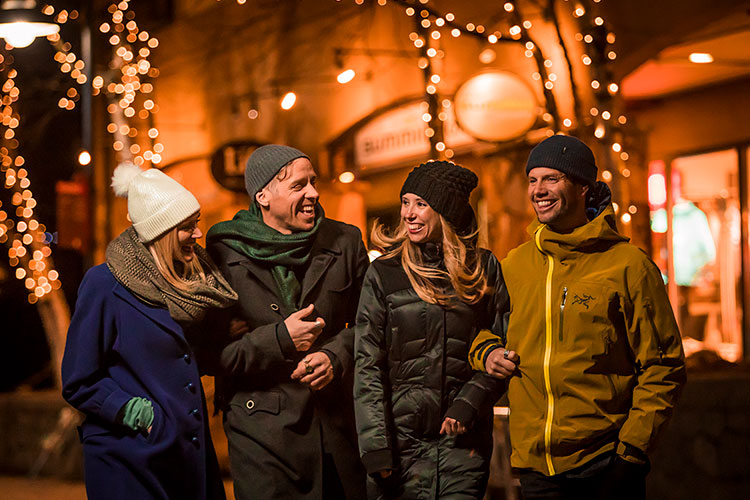 When the word après-ski comes to mind, many think of dancing in ski boots until the early hours of the morning, potentially with a shot-ski involved. But, that’s not all Whistler’s nighttime entertainment scene has to offer. How about a game of pool? A challenging quiz night? Your best Purple Rain rendition? A marathon-style Settlers of Catan game fuelled by locally brewed, craft beer?

Let’s get cozy, sociable and slightly competitive with these après alternatives . . .

INSIDER TIP: Sometimes venues like to change up their events, so please check in with them before getting your heart set on winning bingo.

Get Your Quiz On: Whistler Trivia Nights

Where: Crystal Lounge, located inside the Crystal Lodge & Suites

How good are you at recalling facts? Do you know your current affairs? Are you regaled for your mastery of random subjects? During Trivia Night, a Master of Ceremonies will read out questions, then you and your table can take a chance at answering them for prizes. It’s guaranteed fun and laughs while you test your recall speed and ability to work in a team. There’s even a chance to “burn your bill”!

Other trivia nights around town: Wednesdays at Tapley’s Neighbourhood Pub

A post shared by Whistlers Crystal Lounge (@whistlerscrystallounge) on May 28, 2018 at 1:42pm PDT

Not Your Grandma’s Bingo

This isn’t just any ol’ bingo. With great hosts, a lively atmosphere and a chance to win prizes, Not Your Grandma’s Bingo at Tapley’s Neighbourhood Pub has grown to be a well-loved weekly event among the locals. Grab one of the supplied dabbers, saddle up to your neighbour and get your game face on for guaranteed laughs, and if you’re lucky, a place among the Whistler bingo legends.

Where: Crystal Lounge, located inside the Crystal Lodge & Suites

Did you know that singing boosts your mood by releasing endorphins? Prepare to have fun, be happy and get silly while you belt out your favourite tunes during karaoke at the Crystal Lounge.

Other karaoke nights around town: Thursdays at the Pangea Pod Hotel

A post shared by Whistlers Crystal Lounge (@whistlerscrystallounge) on Oct 2, 2019 at 8:55pm PDT

Whether you’re an avid competitor or new to the sport of darts, there’s an opportunity for you to play at Tapley’s. Even as a beginner, this social activity is perfect for meeting new people while enjoying a casual pint. If you’re interested in playing competitively, join the League Night held every Thursday.

Game Nerds: Board Games in Whistler

Where: Fitzsimmons Pub located in Upper Village or The Living Room at Pangea

Gather around a table with a pint of craft beer and let your competitive side fly free. Perhaps you’ll dominate at a game of Catan or maybe you’ll have the nimblest hand during Jenga. While you let the dice control your destiny, enjoy friendly chatter about the current snow conditions or someone’s backcountry adventure. If you’re not in the mood for a bustling bar then Whistler’s Public Library also has a games night every Monday with non-alcoholic refreshments and prizes.

A game of pool is the perfect opportunity to chat and mingle with others. Generally, this activity is played on a first come, first serve basis but be sure to check with the staff as there could be a competitive tournament you could join. On Wednesday nights at Buffalo Bills, they have a wing eating contest and pool tournament that could see you heading home with a new snowboard!

Have a Giggle: Comedy Nights in Whistler

We bet you couldn’t wipe the smile off your face while you ripped down the Dave Murray Downhill ski run earlier, but the laughs don’t have to end on the slopes. Whistler boasts a lively comedy scene, from professional comics making a pit stop to talented locals that gather their content from all over the world – we like to laugh in the mountains.

To find out if a comedy night is coming up, visit the Whistler.com nightlife events calendar.

If you’re an arts fan, check out the Sketchy Whistler group. This casual, drawing group typically meets twice a month (check their Facebook page) for a beer and sketch session at the Dubh Linn Gate.

If you’re looking for something a bit more structured, head to the Maury Young Arts Centre (home to Arts Whistler) on a Wednesday for drop-in Figure Drawing. Also, check out the Arts Whistler Live! lineup of music shows (think duelling pianists, folk and rock), comedy (local and international) and theatre all happening at the Maury Young Arts Centre.

The Audain Art Museum is open late on Friday evenings (until 9 PM), so that’s another art-infused après idea for those with a love of creativity.

There are also monthly paint nights run by local artist, Andrea Mueller at Cafe Eighty One (located inside the Summit Lodge Boutique Hotel) – come solo or bring your friends for this lively evening activity.

Where: Typically at Blenz Coffee

If the perfect end to your day on the mountain is followed by crafts, then this activity is for you. Join others at Knit Night, a free social meet up that welcomes anyone who loves knitting, crocheting or other fibre crafts – no matter what your skill level. Be sure to bring your own supplies or projects. This event is brought to you by The Knitty Gritty, Whistler’s fibre craft society.

While it’s clear that celebrating an epic day can come in many forms, the one thing that remains consistent is celebrating alongside others.

For more activities and events happening in Whistler visit the Whistler.com Events Calendar and use the check boxes at the top to filter by interest and date to find what you’re looking for.

Hailey came to Whistler for a season and never left. Now, the local community, world-class mountain biking, and endless adventures are what keep her feet firmly planted in the mountains. When Hailey isn't writing, she can be found on a trail, photographing other athletes in action or working freelance as a digital strategist and content developer. Hailey's favourite mountain bike trail is Hey Bud on Blackcomb.