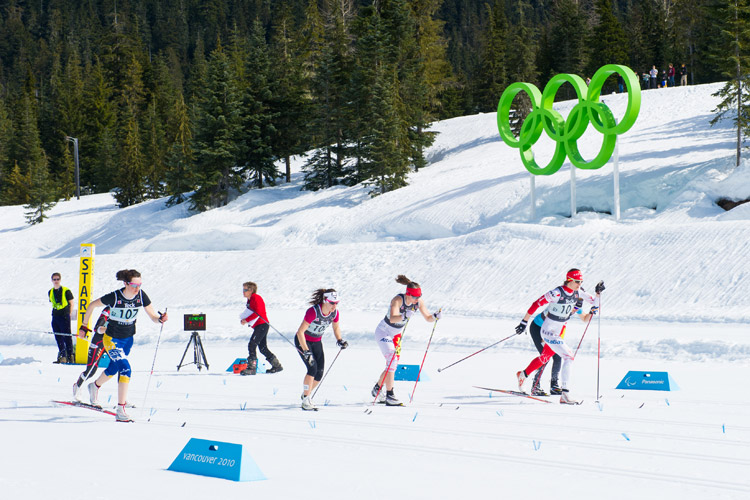 It’s -18°Celsius and I have to be careful handling the gun—any moisture on my finger and it will freeze to the metal trigger. My target is the size of a grapefruit and sits 50 snow-flurried metres away. Peering down the sights of an official .22LR Russian-made biathlon rifle I push myself to become a sniper…. Ignore the cold, feel the trigger, inhale…squeeze…BANG!

A clear miss. That would mean a penalty lap in a real biathlon but up here at the Whistler Olympic Park (WOP) things are a bit more lenient, especially with an arctic wind gnashing at every unprotected strip of flesh and tiny ice crystals pelting our eyeballs.

“Take your time,” says Steven Murray, WOP coach, rifle safety instructor and giver of moral support. Steven also helps facilitate WOP’s public programs, which offer anyone a chance to don some skate skis and try their luck skiing and shooting on the same range that saw Olympic glory and drama at the 2010 Winter Games.

Lying prone (but shooting at the larger targets, the ones real biathletes hit standing up) I nail the next shot, and the one after that, then miss the remaining three. Meanwhile one lane over, Allie, a local fitness instructor who’s never shot a rifle and is trying biathlon because: “the skate skiing is supposed to be a great butt workout,” hits all five targets in a row.

Although the name is Greek, meaning “two tests,” the actual sport of biathlon has roots in the Scandinavian military who used to train for endurance on cross-country skis and then practice their marksmanship. 1928 saw biathlon featured as a demonstration sport in the Winter Olympic Games but didn’t get true acceptance into the big show until 1960.

And even then, women were not allowed to compete in biathlon until the 1990 games in Albertville, France (obviously biathlon’s governing body had never met Allie.) These days the unlikely pairing of skis and rifles is equally popular with men and women alike and is one of the most-watched winter sports in Europe .

Biathlon has yet to gain that kind of traction over here in “the colonies” but thanks to the WOP it’s amassing a stronger local audience every year. Make no mistake though– the shooting is the easy part.

“Pros will take up to ten years to get their skate ski technique honed,” Steven explains as Allie and I click into our free-heeling skinny skis, the frigid temperatures offer us plenty of incentive to push it hard. After a few ungraceful laps of the penalty loop we settle back down for a friendly shoot-out. The tricky part of biathlon is not hitting a target that can be the size of a Gatorade bottle lid from 50 metres, it’s doing so after a multi-kilometre skate-ski race, gasping for air as your heart pounds like a kickdrum.

A hit! Reload, aim…the outside world blurs into oblivion, all I see are the concentric rings of target and sight. BANG!

Hit. The snow-rimmed evergreens of the Callaghan valley absorb the sound of the rifle. The Olympic rings stand over everything, a prevalent reminder of the dreams fulfilled and victories won right in this very spot. BANG!

Hit. That’s 4 for 4. Suddenly I’m shooting for glory and gold. I can feel the warm blood moving behind my eyes. Inhale…squeeze. BANG!

A hit. I’ve just shot a perfect round. But so has Allie, and about 15 seconds faster than I did it.

And here is a short video of an FIS Biathlon event held at the Whistler Olympic Park.