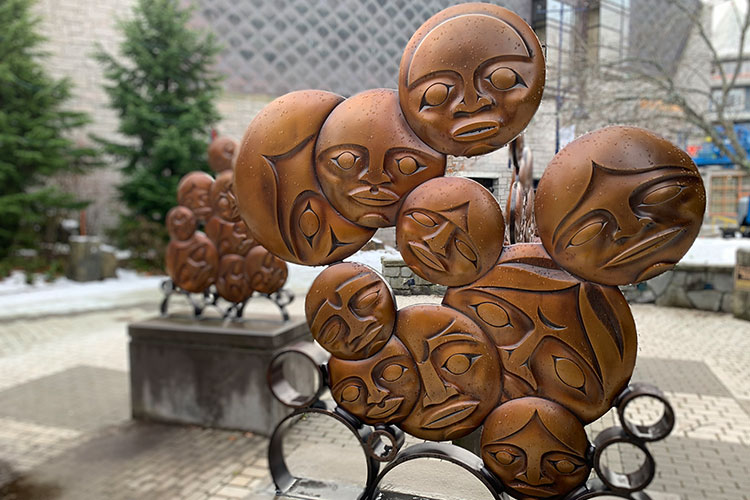 How to Experience Indigenous Culture in and Around Whistler

Whistler is known the world over for its festive atmosphere and abundance of outdoor adventures, but we also honour the human connection to the land that dates back thousands of years. Indigenous peoples have thrived in the Whistler area for millennia and their rich traditions, oral history and contemporary culture can teach us a great deal about how to coexist with the natural world – and one another.

The Líl̓wat7ul (Lil’wat Nation) to the north and Sk̲wxwú7mesh Úxwumixw (Squamish Nation) to the south have stewarded this shared territory since time immemorial. The village of Spo7ez, where Rubble Creek meets the Cheakamus River  (16 kilometres south of Whistler), was a communal gathering place for peaceful trade and commerce. Today, the two nations continue their partnership and influence on Whistler and the Sea to Sky through a shared cultural centre and land stewardship.

From ancient mythology to art and cuisine, here are a few tips to broaden your understanding of Indigenous culture in the Whistler area.

Take a Cultural Journey Along Highway 99

You’re likely familiar with the drive up Highway 99, but have you stopped at the viewpoints to learn more about how Indigenous Peoples are connected with the land? The Cultural Journey Sea to Sky, which launched in 2010, is a self-guided interpretive tour, featuring traditional place names, viewpoints and informational signage along the Sea to Sky Highway.

The signature kiosks, which are designed to represent the woven cedar hats worn by Salish Indigenous people of the Pacific Northwest, share fascinating stories of supernatural beings, mythology about important landmarks, and information about how First Nations people lived in harmony with the land.

There are seven kiosks along the drive, including the popular Tantalus Lookout (which you can visit on your southbound drive from Whistler). At this spot, you can look out over the dramatic Tantalus Range and learn about the high alpine mountain goat hunters of the Sk̲wxwú7mesh people and how they played a role in the formation of this rugged mountain range.

Download the audio tour online to accompany your Cultural Journey.

The mountains surrounding Whistler were just as inspiring and mystical thousands of years ago as they are today. In fact, according to Indigenous storytellers, traditional Squamish and Lil’wat medicine people discovered healing powers on their solitary vision quests, which took them to the highest mountain peaks in their territory.

The iconic volcanic cone we call Black Tusk today can be seen from many viewpoints in Whistler Blackcomb’s alpine and from Highway 99. This arrow-shaped peak is a place of particular significance for the Squamish and Lil’wat people as it marked the beginning of the shared territory. Its traditional name is T’ak’t’akmu’y’in Tl’ain7iny’a’xe7en, which translates to roost of the Thunderbird. The origin story attributes the shape and colour of Black Tusk to the Thunderbird, which is a revered creature said to bring thunder and lightning. The Thunderbird features prominently in a number of Indigenous stories from the Whistler area.

With the Cultural Journey Sea to Sky culminating at the Squamish Lil’wat Cultural Centre (SLCC), it’s only fitting that you stop in to learn more about the area’s Indigenous history, art and culture.

According to the SLCC, the location of the centre is very intentional as it’s nestled into an old-growth forest that contains culturally modified trees that have been preserved for many generations. These trees have been harvested sustainably with only a narrow strip of bark taken so the tree can continue to live. Fitzsimmons Creek, a glacier-fed creek that runs between Whistler and Blackcomb mountains, and along the fringes of Whistler Village, is another area of cultural significance. This is Wolf Clan Territory of the Lil’wat people, who lived nearby and laid their trap line along the creek.

Inside the SLCC you’ll find a host of permanent and temporary exhibits that showcase how the two nations have survived and thrived off the land together. Take a tour of the SLCC with a cultural ambassador and experience a hand drumming welcome, an inspiring film, and a guided exhibit tour.

Be sure to pay a visit to the Thunderbird Café at the SLCC, where you can sample Indigenous-inspired cuisine with menu items like Cedar Plank Squamish Sockeye Salmon Chowder, Homemade Lil’wat Venison Chili and Bannock Tacos. Right now, the SLCC is also offering its Bringing Home the Bannock take-out menu. Order online and enjoy delicious Indigenous cuisine in the comfort of your home or home-away-from-home. If you love charcuterie, you’ll love the SLCC take on it, which features bison, duck and elk, paired with bannock crostinis, dried cranberries and pecans.

Just down the road, the Audain Art Museum houses an impressive collection of traditional and contemporary Indigenous art from across the province, including one of the world’s finest collections of Northwest Coast First Nations masks. The Audain also has a stunning assortment of paintings, installations and carvings by Indigenous artists like Brian Jungen, Shawn Hunt and Fred Davis.

At the entrance to the Audain, you’ll be greeted with a glimmering aluminium totem, carved by Xwalacktun (Rick Harry), who is of Squamish and Kwakwaka’wakw ancestry. The piece is entitled “He-yay meymuy (Big Flood)” and references the story of the Great Flood, which swept through Squamish and forced the nation to take refuge on Nch’kay (Mount Garibaldi).

Learn more about art and culture exhibits featured at the Audain Art Museum.

If you look carefully, you’ll find a host of Indigenous public art installations sprinkled throughout Whistler. There are intricate displays – each with meaningful stories behind them including totems, carvings and statues.

Make sure you pay a visit to A Timeless Circle, a permanent fixture located in the courtyard beside Maury Young Arts Centre that was designed by Musqueam artist, Susan Point. As a legacy of the 2010 Olympic and Paralympic Winter Games, the powerful bronze installation features five fixtures carved with a total of 86 faces that represent the cultural diversity of the 2010 Winter Games and the many generations who have visited and resided on the Whistler lands.

There are plenty more beautiful pieces to discover. Take a self-guided tour of the spectacular Indigenous art in Whistler.

Next time you find yourself atop Whistler Mountain, look up, way up, and admire the Coast Salish welcome figure perched beside the PEAK 2 PEAK Gondola terminal.

Xwalacktun and his son James carved the welcome figure out of a white cedar harvested from the base of Whistler Mountain, using the traditional Squamish carving style. The figure features a human with its arms raised, which symbolizes welcoming people to the territory. The totem also features a marmot, representing the Whistling Marmot (after which Whistler Mountain was named.) The frog at the bottom pays tribute to the Lil’wat Nation, representing transition.

It’s a great honour to spend time in the mountains upon the traditional territories of the Líl̓wat7ul and Sk̲wxwú7mesh Úxwumixw, whose culture is deeply etched into the Sea to Sky landscape. Immersing ourselves in Indigenous mythology, history, art and contemporary traditions is a great way to see Whistler in a new light, and honour those who watch over this land.

INSIDER TIP: June is National Indigenous History Month, with National Indigenous Peoples Day celebrated on June 21. The current exhibit at the SLCC (until October) is called Boarder X, a compilation of interdisciplinary contemporary art by Indigenous artists from across Canada who surf, skate and snowboard.

Whistler is still the same fun-loving, thrill-seeking destination it’s always been, we’re just slowing the pace a touch this summer. We can’t wait to welcome you back when the time is right for you, and if you want to win a trip to Whistler this summer (enter now, travel later), check out the Adventure Deeper Contest, which includes round-trip airfare, six nights’ accommodation and a host of summer activity fun.

This summer, the longer you stay, the more you save with room rates dropping as you book more nights (7 nights from $93 CAD per night). You will also receive a free adventure voucher, which gets you up to $100 off a Whistler activity.

Amber is a freelance storyteller and outdoor adventurer who has spent 9 years living in the beautiful Sea to Sky Corridor. When not crafting content and creative for her clients, she spends her spare time snowboarding, hiking, biking and SUPing her way through the wilds of BC. Fun Fact: she spent the first 7 years of her life living on a sailboat and travelling the world with her family. Now, she has the best of both worlds, splitting her time between ocean and mountains—and loving every minute of it. 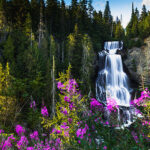 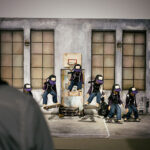