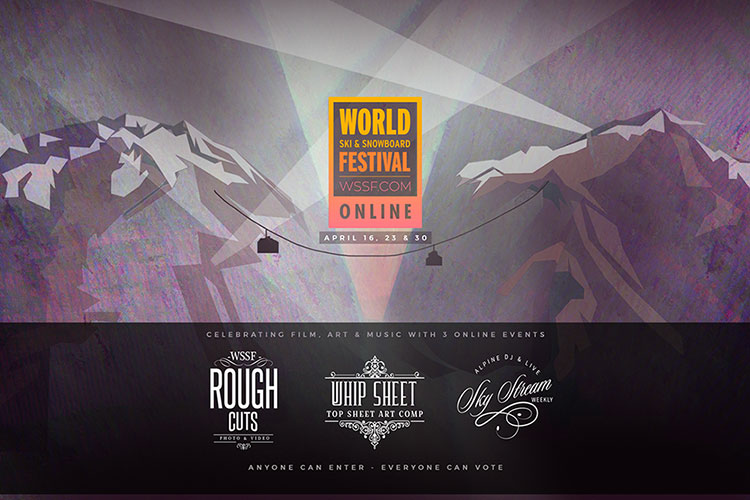 Anyone can enter, everyone can vote.

This is the tagline for this year’s World Ski and Snowboard Festival (WSSF) as it shifts to a digital format and welcomes the world to get involved with a little thing they like to call mountain culture.

As always, it’s a celebration of the arts, music and sport, but this year it will be in the form of a three-event virtual festival happening on three successive Fridays, April 16, 23 and 30, from 6 to 8 PM, PST. You can tune in via Sky Stream from the WSSF website.

Due to the current public health orders connected to COVID-19, festival favourites like the Saudan Couloir Ski Race, Big Air, 72-Hour Filmmaker Showdown and Olympus Pro Photographer Showdown are on hiatus for this year, although elements of all of them can be found in the new digitized events.

“WSSF in its prime defines Whistler at its best and is an iconic showcasing of Whistler’s soul,” explains Joey Gibbons, President of Gibbons Whistler. “Normally, WSSF would invite the best athletes and artists, representing mountain culture, from around the world, to connect in Whistler in April. We are not able to come together in person this year, but we can come together virtually and we are excited to showcase the creative talents from within the mountain culture community digitally this year.”

It’s hard to reimagine a festival that typically brings together hoards of snow fans, buzzing off the collective thrill of watching athletes and artists giving it their all, but this year we’ll see mountain culture prevail as the festival brings us together to celebrate digitally.

Three events. A film and photo competition called Rough Cuts, a top sheet art competition called Whip Sheets, and live music and DJ sets broadcast to the world from undisclosed, iconic Whistler locations. Three virtual events, each one happening on a Friday in April from 6 to 8 PM, starting April 16.

We connected with the WSSF team to take a deep dive into how people can get involved and still celebrate everything that makes mountain culture so vibrant.

Like snow sports? Got a camera? Got the magic touch in the editing room? Then enter the Rough Cuts comp. It pulls video, photography and sport into one event, encouraging teams from around the world to submit a two- to five- minute film featuring footage (shot in the last ten years) of skiing, snowboarding and / or snowsports and their top 10 to 20 photos.

How can you get involved?

Submit your film by noon on April 10, 2021; the full rules and regulations can be found on WSSF.com. Their top tip for this comp is to think of your film as a short story, draw the viewer in and keep them engaged until the very last second. The judges will be looking for the most innovative entries, so spend time on your concept.

If you love watching snowsports and innovation at its best, you can join in by voting for your favourites. All the films will be reviewed by a panel of local filmmakers and athletes with the top eight local and top four global films advancing to the online film festival where fan votes will determine who moves to the final round.

Voting opens on April 16 (round one) and continues on April 23 (round two), with the winners competing in the final for your vote on April 30, with the overall champs announced after the DJ set that evening.

What do you win?

A whole lotta kudos, that’s what! The winning film shot within the Sea to Sky area will walk away with $5,000 in cash, with global participants competing for a $1,000 purse, along with the Key to WSSF 2022, which is a prize pack that includes Whistler accommodation, dining gift certificates, Scandinave Spa bath access and tours with Canadian Wilderness Adventures.

The winners of the Best Photo category also walk away with $1,000 in cash.

Artists from around the world are invited to submit their original top sheet designs to be voted on by the world. This means a pair of Foon skis or a Hightide snowboard will be your canvas.

How do you get involved?

Submit your artwork on the WSSF website by noon on April 20. A panel of judges will whittle the submissions down to 20 entries for each category and then you can vote on your favourite board and pair of skis from April 21 – 30, with the winners announced on the final day of the festival, April 30.

What do you win?

The winning artists will receive a pair of skis / snowboard adorned with their art, plus the ski entry will have their design made available on custom orders with Foon Skis.

Through Sky Streams, Whistler’s most iconic locations will host DJ and live music sets which will be broadcast to the world. The lineup includes all the locals you love like The Hairfamers, Skiitour, Case of the Mondays, DJ Foxy Moron, tyMetal, Bangers & Mash and poetic rapper, The Prophet.

Keep you eyes on the WSSF website and social media feeds for more music lineup information as it comes out.

The month of programming is designed to give local athletes, artists and entrepreneurs an online platform to connect. Teams are encouraged to showcase diversity on their teams. The diversity requirement can be fulfilled by creating teams with a variety of different generations, genders and / or races. Alternatively, it can be visually represented in an artistic way. An additional 5% percent of all prize money will be donated on behalf of the winning filmmakers, athletes & artists to a Sea to Sky charity of their choice.

“The Whistler Ski and Snowboard Festival has always been part of our end-of-season ritual and a much-anticipated event for our community,” said Jack Crompton, mayor of Whistler. “While we continue to live in a time that forces all of us to pivot and reimagine our events, I’m thrilled that the WSSF has been able to go virtual to bring together and uplift our community.”

The world is invited to join in on WSSF virtually on Friday, April 16, 23, and 30 from 6 – 8 PM PST to catch Sky Streams, pick their favourite top sheet design, and cast their votes for films to advance to the finals. And as we said, anyone can enter and everyone can vote!