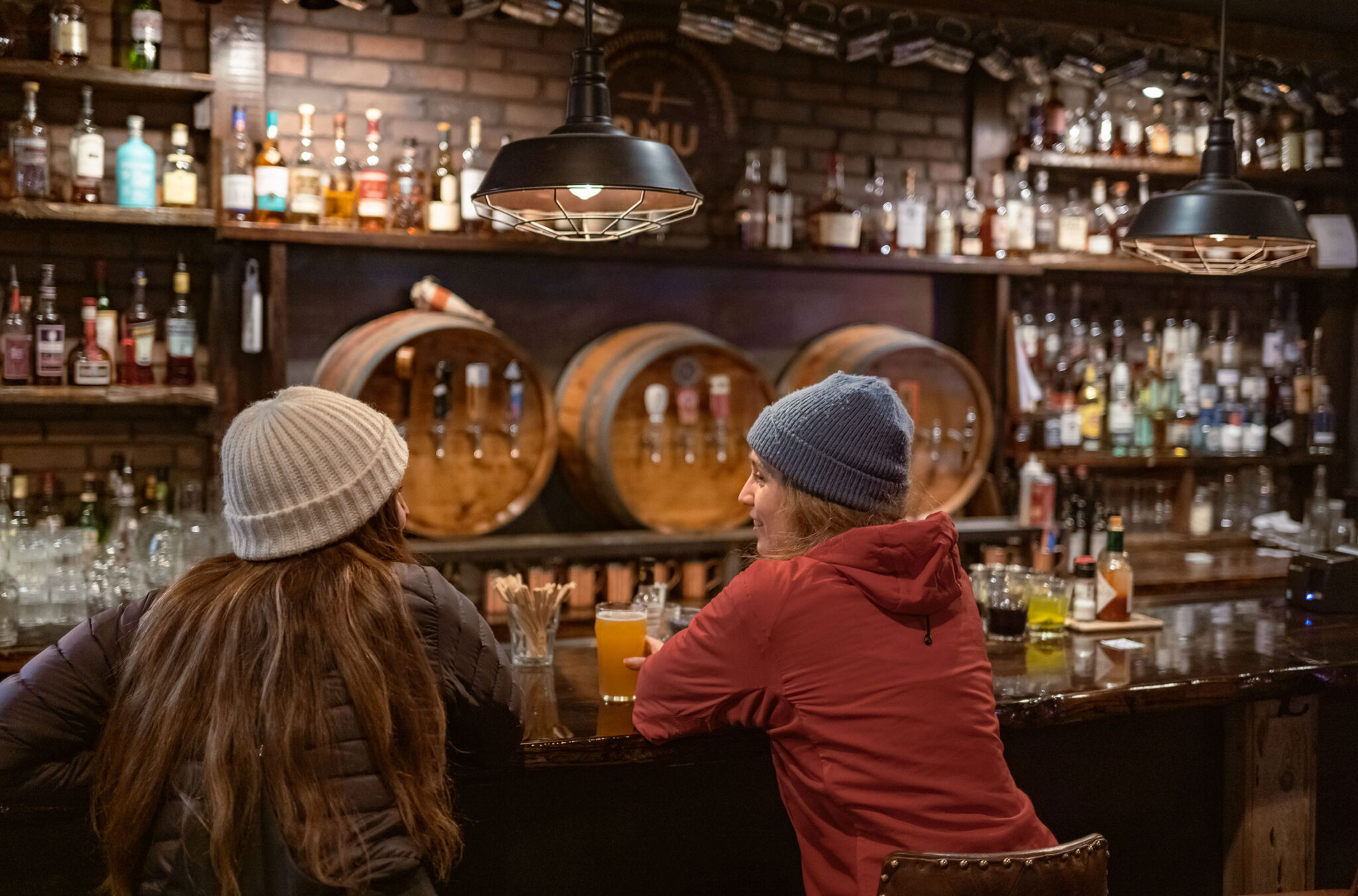 It’s that time of year when we say goodbye to the fruity, hazy beers of summer and welcome the dark, roasted flavours of winter that keep us warm on those cold, frosty nights. Whether you’ve been getting deep and steep in the alpine or simply cruising groomers, one thing’s certainly on the agenda – aprés!

But a simple lager or pilsner won’t cut it for most on a brisk winter’s day. You might be looking for something a little more festive, dessert in a pint glass, or a beer that’s going to make you feel all warm and fuzzy. Don’t worry, we’ve got you covered.

With no shortage of warm winter beers and a tasting room that will make you feel like you’re on a backcountry retreat, Coast Mountain Brewing is your go-to place for tasty craft beer.

If you’re searching for a holiday beer to go with some lazy afternoons on the sofa, curled up in your favourite PJs next to a burning log fire, then the Cozy Red Ale is the winter beer for you. Savour the flavours of this classic take on a traditional red ale, with hints of toffee, butterscotch and a slightly earthy bitterness from the Fuggles with which it was brewed – I mean, Fuggles even sound warm and cozy.

Looking for something darker, richer and creamier? Coast Mountain’s Woodnutt Brown Ale brings sweeter flavours, with notes of caramel and chocolate combining to create this perfect winter beer – no wonder it’s a two-time national award winner. Every year, the Winter family (owners of Coast Mountain) get together with long-time Whistler locals, Luke and Brandi Woodnutt (co-owners of The Raven Room) to create this heartwarming winter favourite.

Wait, there’s more. Have you ever wondered what would happen if you took the flavours of the Caribbean and combined them with the taste of winter in the Pacific Northwest? Well, you no longer need to leave this to the imagination because Coast Mountain Brewing is on the verge of releasing its Big Imperial Stout. Aged in a Caribbean rum barrel for two years with sour cherries, vanilla beans and toasted coconut, this beer will transport you from the snow-dusted streets of Whistler to the white sandy beaches of Jamaica. Follow them on Instagram to get a heads-up of when this comes out.

Where to Find These Winter Beers in Whistler

The Cozy Red Ale can be found at RMU Whistler, Stinky’s on the Stroll and Fitzsimmons Pub. The Woodnutt Brown Ale is at Blacks Pub, Hunter Gather and Cure Lounge at Nita Lake Lodge. Note that these beers do sell out, so be prepared to try something else! Both can also be found at most privately-owned and BC liquor stores in Whistler.

INSIDER TIP: The Blackcomb Liquor Store in the Upper Village stocks upwards of 350 local, craft beer options and their friendly staff can help expertly guide you through some of the more notable ones.

If you’re thinking of winter beers, there’s one beer that immediately springs to mind for whistler locals – Whistler Brewing Co.’s Winter Dunkel. It’s a beer that screams Christmas and is enough to make you want to pull out your festive decor and start singing along to Nat King Cole. It’s a beer full of richness, with smooth chocolate flavours and a hint of orange zest, giving a sweetness to the taste and a strong fruity smell. It’s Whistler Brewing’s answer to a Terry’s Chocolate Orange but in a glass.

Another must-try winter beer from Whistler Brewing Co. is the Black Tusk Ale. Brewed from the original 1989 recipe, this dark chocolate ale has a smooth finish with a hint of cocoa and roasted coffee. Kick back, relax and soak up the ski town vibes of this classic Whistler brewery while sipping on Whistler’s oldest beer.

Where to Find These Winter Beers in Whistler

You might find these two beers at the Beacon Pub & Eatery and at most of the privately-owned and BC liquor stores in Whistler but they go fast, so heading to the taphouse in Function Junction is your safest bet. I’d like to point out that it’s worth the trip as you can visit both breweries as well as hit up Forged Axe Throwing (maybe do the axes first). You can jump on a bus or opt for a Sea to Sky brewery tour.

The beer you taste at The Brewhouse can’t be found anywhere else, so you don’t want to miss this one. All their beer is handcrafted by brewmaster Derrick Franche, who’s always busy creating unique and innovative brews, as well as putting his own spin on some traditional classics.

If you’re looking to hit the sweet spot and find a well-rounded, winter beer that’s nicely balanced in flavour and strength, then try their Scottish Ale. This full-bodied, red ale combines the sweet flavours of caramel and toffee with a smoky finish.

“It’s a rich ale that I believe tastes a little like an Islay Scotch Whisky. It has a smoky finish from the peated malt.” Derrick Franche, Brewer at High Mountain Brewing Co. / The Brewhouse.

For those die-hard beer nerds among us, Brewhouse’s Barrel Aged Sour Belgian Quad is also a must-try this winter. This delightful, dark red ale has been aged for one year in a cabernet sauvignon barrel, giving deep earthy notes from the oak, alongside hints of vanilla. Strong notes of caramel, raisin and plum can be tasted, with a kick of sour cherry pie from the Brettanomyces yeast used in the fermentation process. This complex, multi-layered Belgian Quad is a Whistler winter favourite and with an ABV of 9.9%, it’s sure to warm you up on even the coldest of days.

On the other end of the beer spectrum, there’s the German-style Kölsch. This might not be your typical winter warmer but we couldn’t talk about Whistler, winter beers without mentioning this slightly fruity, dry, easy-drinking blonde ale.

“When I’m feeling exhausted from the ski hill, rather than drinking big, strong beers, a lot of times I want to come down and drink light, snappy beers,” says Franche. “When my legs are burning from big powder days, I’m looking for something refreshing.”

With eight taps of constantly rotating local craft beer, the Fitzsimmons Pub in the Upper Village is the place to go when you’re feeling eager to try something new. Throughout the season, over 180 brews make an appearance, so you can be sure there’s a beer for every occasion and season.

Moon Under Water’s Puft Daddy Marshmallow White Stout takes you to s’mores around the campfire with a beer that tastes like toasted marshmallows. The perfect choice for those with a sweet tooth, who prefer to drink their dessert rather than eat it.

Don’t let the Grinch steal Christmas – but in this case, he just might. Bridge Brewing’s The Grinch Winter Ale is a true festive treat. This beer packs strong notes of chocolate, caramel and coffee with a sprinkle of seasonal spices. Hot chocolate meets gingerbread in this winter-warming beer.

INSIDER TIP: Take a tour of some of Whistler’s craft beer hot spots with the free, Go Whistler Tours app. The beer tour highlights nine destinations throughout Whistler Valley, enjoy! However, if you fancy a guided option that includes transportation take a look at Whistler Valley Tours.

So, whether you’re an ale, stout or sour beer drinker, there’s something for all brew-lovers in Whistler’s beer scene and some cozy locales to enjoy it. Cheers to a Whistler après filled with good times and good beer!

After trading the rolling hills of Wales for the rugged Coast Mountains of Whistler, Gareth decided it was time to follow his passions. Equipped with nothing but a camera in his hand, he began to capture the beauty of his surroundings, telling stories through his photos and painting pictures through his words. 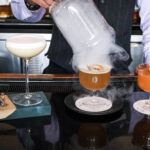 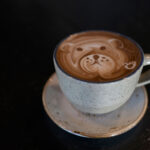