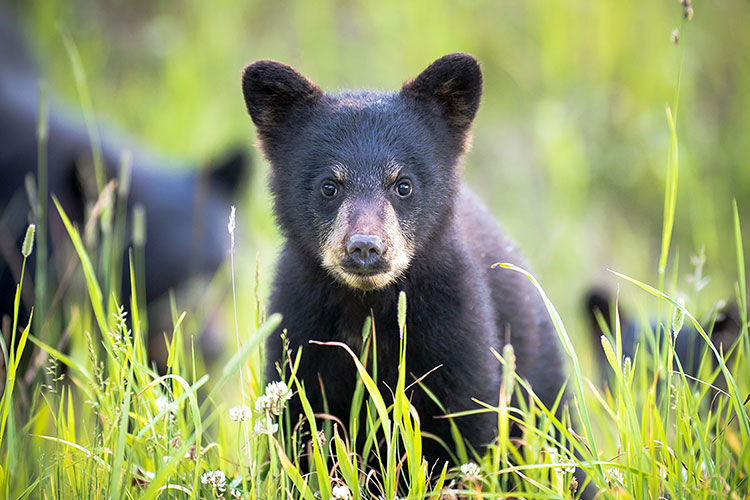 A Life With Whistler’s Bears

There’s a husband and wife team in Whistler who are very excited at this time of year. Forget festive, spring is the season that gives them the tingles for that palpable feeling of expectation, not knowing what might show up underneath the proverbial – make that literal – tree. That’s because spring is when Whistler’s bears return.

“I can’t imagine my life without bears,” says Jason Coleman, co-founder of Whistler Photo Safaris. “I get so excited when the bear season comes around and I get to see them again. I know they don’t think of me like an old friend, but that’s how I see them.”

Jason Coleman and Sherry Hilliard are originally from Toronto. Sherry was busy working her way up in the film and television industry, while Jason was following his childhood dream of travelling the world with camera in hand. He went to college for photography, becoming a commercial fashion photographer.

“I remember spending hours studying National Geographic magazines as a kid and then as a young teen,” says Jason. “I fell in love with a photography book by legendary photojournalist Ernst Haas and that inspired me to take a few darkroom classes to learn how to process and print film.”

Jason moved to Whistler in 1992, and like many, he came for skiing, but then fell in love with British Columbia’s natural beauty and knew Whistler had to be his home. A few years later, Sherry came to Whistler on vacation, where she met Jason through a mutual friend who asked if Sherry could stay in the cabin (where he lived by himself), so she wouldn’t have to crash on a couch surrounded by half a dozen ski bums. Throughout their time together, they’ve come and gone from Whistler but they decided it was the place they wanted to raise their family.

“Whistler has been an idyllic place to raise a family,” says Sherry Hilliard, co-founder of Whistler Photo Safaris. “Both children, now 14 and 16, have been enrolled at the Whistler Waldorf School since the beginning of their education and have thrived more than we could ever have hoped. Both are deeply interested in the bears we have been observing all these years and have become talented photographers in their own right.”

When he wasn’t travelling for work, Jason was photographing bears as a hobby in his spare time. In 2008, a photo of him face to face with a bear looking down his lens went viral. This gave them an idea for a new business – bear viewing tours.

Sherry put her newly obtained commerce degree in entrepreneurial management to use and was responsible for taking the business from concept to a thriving tour operation. Jason started guiding the tours in 2012, but it really got going when they partnered with Whistler Olympic Park in 2015. Now, in a typical year, thousands of people will come out with Whistler Photo Safaris and leave with a better understanding of one of Canada’s most iconic animals.

How Do You Start the Season?

Whistler Photo Safaris has exclusive rights to bear viewing in Whistler Olympic Park, which is in the Callaghan Valley, a fifteen-minute drive south of Whistler Village. Where you can get to by car is just the beginning of adventure for those people on a tour.

Jason starts tracking bears around early to mid-April and once he can find bears reliably every day, they launch their tour season. They usually count around 58 bears in the Whistler Olympic Park area, some just passing through, where for others it’s their home.

He looks for tracks in the snow along routes he knows are common thoroughfares for bears. He also looks at areas where there are early food sources, like big patches of skunk cabbage, for prints and scat.

“It’s like clockwork. I have my reliable areas where I know I’m going to see some big male tracks in the snow. They tend to come out first, usually in April,” explains Jason. “Mums and cubs tend to be out in early to late May when there’s more food available, especially clover. I predict we’ll be seeing them early this year because it was a good mating season last year with lots of food. It’s also been a hot spring.”

Jason and Sherry are also tracking down their tour guides for the season, picking passionate nature enthusiasts who can weave a good tale.

“We love it when our guides bring different skill sets and stories to the tours,” says Sherry. “We’ve had wildlife vets, geologists, biologists, ecologists, and, of course, lots of photographers. What we’re looking for is an entertaining storyteller, who will bring their life experiences into play and create a really memorable time for our guests.”

They also get their convertible Jeeps ready to rumble, which gives tour-goers a 360-degree view. It also helps to have four-wheel drive when you go off the beaten path in Whistler.

How Do You Find the Bears?

Jason, and the bears, are looking for rich clover, full berry bushes, nuts, seeds, bugs and grubs, of which bears have to consume roughly 10,000 calories per day during the summer and almost twice that in the fall months to prepare for their long winter nap.

“We’re food trackers more than bear trackers,” laughs Jason. “The first thing we do is look for the food they’re going to be eating and then we keep revisiting these spots.”

Jason comments that each year is very different, with a lot depending on the weather and its impact on the bears’ food sources.

“If the berries aren’t out yet the bears will eat the seed catkins from Balsam Poplars and Red Alders,” explains Jason. “I often tell my guests to look up and they’re usually stunned to see the tops of these trees stripped bare.”

Do You Have Any Favourite Bears?

Throughout our chat, Jason’s been using the personal pronouns “he” and “she” when he talks about the bears. He’s got to know quite a few over the years, and, with a degree from Harvard in behavioural science, he’s a keen observer of their character traits.

“There are definitely some personalities out there,” laughs Jason. “There’s a young male, around five years old, nice and tall. His mom was the dominant female and his dad was a huge dominant male, so he’s a big bear. His mom’s been trying to kick him out of the park since he was one and a half, but he won’t leave. My kids named him Relo. He tests his own dominance by eating right by the bigger males; we’re all amazed that they haven’t attacked him. He’s a bit of a punk.”

Tell Us Something Incredible You’ve Witnessed on a Tour

Jason and Sherry certainly have their stories after being exclusive watchers of the Whistler bear drama that unfolds before them each bear viewing season.

“We once found three cubs trapped up a tree by two protective momma bears,” explained Sherry. “We watched the drama unfold for several days. The first mom had one cub and the second had two cubs. The lone cub had climbed a tree and the two cubs had followed, unknowingly separating it from its mother, who couldn’t help it down because the mom of two wouldn’t let her near the tree and her own cubs. They sorted it out in the end, all the cubs were fine and we got to witness this drama unfold alongside our tour guests.”

Due to recent COVID-19 travel restrictions, most of Sherry and Jason’s guests have been from Canada. Although they miss their international visitors, it’s a unique opportunity to talk to people who have lived close to black bears, but haven’t really gotten to know their furry neighbours. These tours give you a chance to really be amazed by these incredible creatures and leave with a new appreciation for them.

What Other Wildlife Do You See Along the Way?

Jason and Sherry list off the wildlife they’ve spotted on tours, which includes, deer, rabbits, hares, wolverines (very rare), bobcats, lynx, cougars, great horned owls, eagles, red tail hawks, pikas, grouse and coyotes. So, although bears are the focus of the tours, you can see how abundant the wildlife is in Whistler, so you’re likely to catch a few other species while you’re searching for the hairiest one.

Why Take a Tour?

“Our tour starts at the end of the paved road; where you’ve always wanted to go,” says Jason. “It’s paradise. It’s dead silent amongst the old-growth forest, we visit pristine lakes and get epic views of Black Tusk (an ancient volcano) on our return journey. Seeing the wilds of the Whistler Valley is a therapeutic and humbling experience.”

All Whistler Photo Safaris tours are currently private to adhere to COVID-19 protocols. Tours run throughout the day, with the most popular times being sunrise and sunset, although the guides know where to find the bears at all times of the day.

If you’re travelling with your family, ask your guide about Whistler Photo Safaris’ new Junior Ranger Program – it certainly takes homeschooling to a new level.

“After a tour, people say that they come away not afraid of bears,” says Jason. “They respect them and understand them. We shouldn’t be terrified of them and it’s important that we’re not because we share the same ecosystem and we have to learn to peacefully coexist.”

Just as a reminder, if you do see a bear while driving on the highway do not stop or pull over. Do not approach or feed bears, because, unfortunately, a fed bear is a dead bear. If you see one while you’re out walking, back away slowly. For more on bear safety read Be Bear Aware in Whistler’s Backcountry.

A bear viewing tour is the safest way to see a bear, for you and the bears. It’s also the best way to find out more about these incredible creatures and take home some great photos alongside memories that you’ll treasure forever. Bookings are available from the start of May until the end of October, happy tracking!

Run For Those Who Can’t: Wings For Life World Run

5 Reasons to Stay Longer in Whistler This Summer: Adventure Deeper