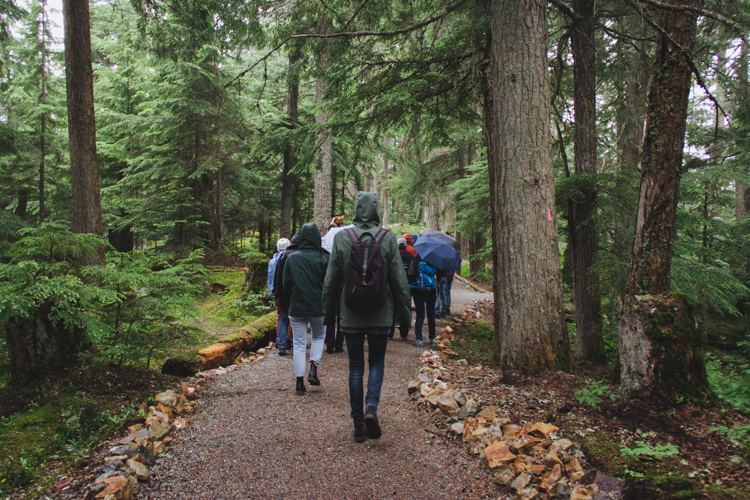 Editor’s Note: This post contains the Sḵwx̱wú7mesh Úxwumixw (Squamish Nation) and Líl̓wat7ul (Lil’wat Nation) languages. When both are used they’ll be abbreviated and bracketed as [SL] and [LL] respectively.

It’s your typical June afternoon in Whistler as I walk to the Squamish Lil’wat Cultural Centre (SLCC), one moment the sun is shining and the next it’s raining so hard the drops are bouncing off my hood. I haven’t brought an umbrella but that’s okay, we’ll be heading under the cover of the forest. If you haven’t experienced the coastal temperate rainforest in the rain before, it’s something to add to your list. You know how you have that one outfit that you really feel like yourself in? That’s the rain for the forest.

First, I must check-in for my Guided Forest Walk. The welcome staff at the desk and I have a good chuckle about how much water is dripping off of me, we agree the shower should pass over soon. The tour meeting spot is filling up quick, I’m thrilled to see how many people are interested in the local flora. Our guide, Brandon, introduces himself and starts us off with song and dance. We’re divided into three groups, sp’ák̲w’us [SL]  / Npelkwáqs [LL] (eagle), tak̲áya [SL] / Sq̓áwam̓ [LL] (wolf) and Yéw̓yews [SL] (killer whale) / Qwen̓ís [LL] (whale). I’m in the last group and our dance consists of diving up and down and mimicking the water spout. A few of the staff jump in to really show us how it’s done. This is what I love about the SLCC, it’s participation-based cultural sharing.

Through the window we can see what looks like a green roof, Brandon explains it’s the top of an s7ístken, a traditional Líl̓wat7ul (Lil’wat Nation) pit house. These would be dug into the ground to be hidden from passersby and make use of geothermal cooling and heating. We head outside and into the s7ístken to get a better look. It’s a clever post and beam design with a central area for cooking. Eight to ten people would live in one s7ístken with hanging cedar mats as room dividers. While s7ístkens are not in use anymore, there are said to be a few still in tact. In 2015, the ruins of one was discovered north of Pemberton and archeologists used carbon dating to discover it was 5,500 years old!

Leaving the protection of the s7ístkens we head out along the Salish Stroll. The first thing Brandon points out is the Yetwán [SL] / Twan [LL] (salmon berries), these are the first to bloom and don’t preserve well so it’s best to make the most of them while ripe. Similar to a raspberry in shape, these berries are packed with a host of good stuff like iron, potassium, vitamin C and vitamin E. It’s no wonder the resident black bears are always snacking on them.

Next up is an infamous plant of the West Coast, Ts’ex̲ts’íx [SL] / Ts̓exmálhp [LL] (stinging nettle). The harvesting of this plant takes care but once done it can be made it to all kinds of things, including tea. Even the roots of the plant are valuable and were traditionally used in fishing nets and ropes. Another source for these Brandon says, was the inner bark of the cedar. X̲ápay̓ay [SL], Tsátawaoz̓ [LL] (cedar) is still used today for weaving, crafts, drums and regalia. In fact, the woven headband Brandon is wearing was made by his father who greeted us at the desk. The trick to working with cedar bark is leaving it out to dry then soaking it, it becomes surprisingly pliable. Walking around some of the forests in Whistler you may come across western red cedar trees with a patch exposed where the bark has once been harvested.

OUTSIDER CODE: Harvesting cedar bark is not to be attempted by those without proper training, done improperly it can damage and kill the tree. The same goes for the harvesting or foraging for any flora.

But nothing is ever taken without thanks. Brandon speaks to us of the stula7 [LL] / sxwi7shen [SL], a deer can offer not only nourishment but also clothing and tools. In both languages, you may notice the name includes a 7, when the Líl̓wat7ul and Sḵwx̱wú7mesh languages were first put into a written, latin letter-based language by a German linguist the 7 was previously a question mark like symbol. But in the age of typewriters, which didn’t include a key for it, the 7 began to be used instead, it often signifies a pause. Both the Sḵwx̱wú7mesh and Líl̓wat7ul languages are undergoing a revitalization and are being taught in participating schools across the Sea to Sky region.

As we wind down the path, we learn about mimts’ [SL] / qweĺíp [LL] (lichen), Séliy̓ay̓ [SL] / Ts̓ólts̓vl [LL] (oregon grapes) and more that I’ll let you discover for yourself on tour. The rain has picked up again so Brandon shelters us in the longhouse which is being prepped for the tea offering. The longhouse was traditionally used by the Sḵwx̱wú7mesh Úxwumixw and like the s7ítsken, sections would be divided by hanging cedar mats. Families would live in the sections between posts with communal areas for cooking either in the middle or at both ends, depending on the size. The roof is sloped to help snow and rain slide off.

We hear the rain doing so now as Brandon starts to tell us more stories to fill our remaining time in this cozy, dry space. He shares both his love of gaming and learning about his culture – for him, he says that is what’s so great about the SLCC, it’s a space to share not only history but also how culture is expressed in modern day. After mentioning he is from four different Nations and has a wealth of different songs in him, it’s only natural the requests start rolling in. He starts us off with the heartbeat song which gives thanks to the deer for its life and hide and to the cedar tree for its wood, which makes up the drum frame and stick. The sound echoes off the cedar beams all around us as a natural phenomenon takes shape, our own heartbeats begin to change tempo to match that of the drum.

We let the song sink in before Brandon starts up another, the next one he says, is one he really enjoys and has been making popular again at the centre. A spark of recognition goes off in my brain as he begins, I know this one! It’s the Killer Whale Song written by Latash Nahanee, it brings me back to a very fond time of learning from the Sḵwx̱wú7mesh Úxwumixw elders. Latash had told us this song came to him on the wind, and here it was making a re-appearance to my ears because of the rain.

There’s so much to discover about the coastal temperate rainforest and how it has entwined with the lives of the Coast Salish peoples. Don’t skip this experience no matter the weather, you never know how it may surprise you.

Guided Forest Walks at the Squamish Lil’wat Cultural Centre run from June – September on Wednesdays at 3 PM, and are free with admission. Discover more arts, cultural and outdoor offerings at Whistler.com.

Vacationing with Your Dog in Whistler 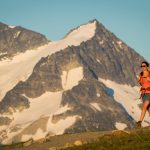