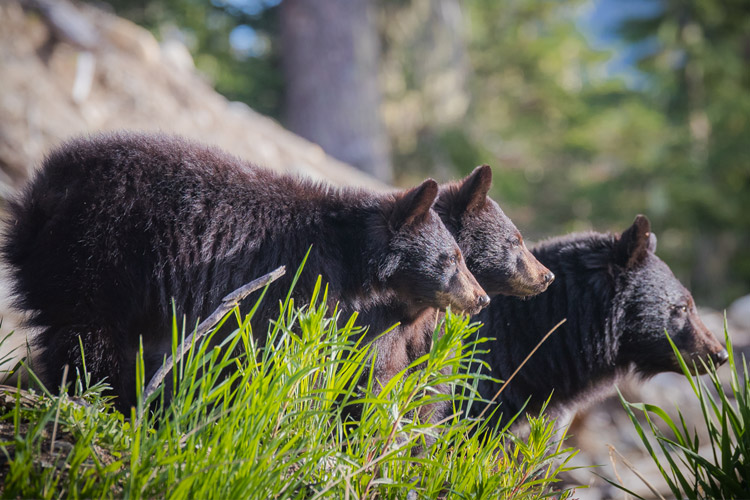 What Happens When A Bear Hibernates?

In Whistler, we live amongst some rather large, furry neighbours. Being bear aware in the mountains is part of our everyday life, from making sure we don’t have attractants in and around our homes, to making noise when we’re out exploring and keeping our distance if we do meet one of these iconic creatures.

It’s incredible to see bears in their natural habitat, but to keep them wild and free we have to learn and respect their habits. So, while they’re napping we thought we’d take a deep dive into why they actually take this winter break.

Where Do Bears Sleep and for How Long?

It’s nice to imagine a cute, furry bear curling up to sleep in late fall, knowing that the next time it opens its eyes, little green shoots will be popping up, flowers will be starting to bloom and the bees will be buzzing. However, it’s not quite so simple.

Bear biologist, Dr. Lana Ciarniello, reminds us that hibernation is a function of food availability. In warmer climates, with more food all year round, bears may stay awake and not hibernate at all. In colder climates, like in Whistler, there isn’t enough food to keep them going over winter, so bears hibernate in order to conserve energy and make it through to the spring.

At some point in the fall, both the grizzly and black bears that live around Whistler will start to construct dens. These can be burrows in the ground, holes in hollow trees, under rock crevices, or simply nests above the ground that get covered in snow. In Whistler, bears generally go to sleep in late fall, when food runs out, waking up three to five months later in spring, as their first food sources are available again.

How Do Bears Prepare for Hibernation?

They eat! If you catch sight of a bear in the fall, it will likely be in the midst of feeding. Both black bears and grizzly bears have a highly varied diet. Depending on where they are, their diet will consist of berries, salmon, dead animals, grasses, or roots. Often, they will eat all of these things depending on what’s available in any given season.

When preparing for hibernation, bears have been known to double their body weight, eating several pounds of food per day. The fatter a bear gets before hibernation, the better.

This process of excessive eating or fattening up is called hyperphagia and is crucial in order for the bear to make it through winter. This is why it is especially important that bears can feed undisturbed in the fall.

What Happens While Bears Are Hibernating?

When bears sleep for the winter, they don’t eat, urinate, or defecate. They do wake up several times throughout the winter though and can rouse themselves very quickly if they sense a nearby intruder or threat. They may also give birth during this time.

If a female gets pregnant with a developing embryo, she will wake briefly in January or February to give birth. Once the cubs are born, she continues to sleep while her cubs nurse and grow. Since bears are not true hibernators, they often wake up in their den. When scientists have visited black bear dens in winter, they often find awake bears in a sleepy state.

Whether females give birth in the den is actually dependent on how much they managed to eat in the fall. Female bears have delayed implantation and induced ovulation, meaning that when bears mate (generally in June), the fertilized egg does not immediately implant in the uterus and start to develop, as it does for humans.

Instead, the egg begins to develop and then stops, waiting until the mother bear has settled down for hibernation in November before implanting on the uterine wall and continuing its development. Depending on how much fat she has managed to put on, the egg(s) may develop into a litter of one or more cubs.

For grizzly bears, females need at least twenty percent body fat in order to get pregnant. If the female bear has not stored away enough fat to sustain herself and a cub through winter, her body will reabsorb the embryo and she will not give birth. The fatter a female bear is the more cubs she will produce and the healthier they’ll be.

While hibernating, a bear’s system does not stop working completely. During their months in the den, they may do some grooming, licking fur and bits of dirt and leaves off their bodies. When these items pass through their digestive system, feces will build up in the lower part of their intestine. The intestinal wall will soak up all the fluids, forming a dry, hard plug (1.5 to 2.5 inches thick).

The magical, mysterious ways of a bear’s hibernation can teach us a lot. Scientists are learning about biological processes that prevent bears from getting things like osteoporosis and diabetes while hibernating, which is both fascinating and important for our understanding of mammals more broadly.

What Happens When the Bears Wake Up?

Bears know it’s time to emerge from hibernation when the temperatures start to warm up and the snow melts away. Male bears will emerge first and females with cubs normally come out last.

After months of sleeping, bears are hungry and ready to eat. Females with cubs are under extra pressure to find food so they can sustain themselves and their young. This means spring can be a peak time for human-bear interactions as bears search for good food sources and young bears explore their new habitats.

Bear attractants left out by humans are a tempting treat but they can lead to situations that are dangerous for both people and bears, so to protect everyone we need to be vigilant.

What Is Happening to Bears in General?

Humans are affecting both black and grizzly bear populations. Factors such as increased activity in backcountry areas, habitat loss from development and changes caused by climate change. With shortening winters, we are already seeing evidence that bears hibernation habits are changing – they stay awake longer in fall and wake up earlier in spring.

Around the world, bears are recognized as one of the great species of the wild and for many, they are a Canadian icon. When we have healthy bear populations, we know that we have clean water, good biodiversity and connected wild spaces. What’s good for bears is good for people!

So, next time you look out over the Whistler Valley in winter, know that you are looking out at more than 50 bears, sleeping under a wintery blanket of snow.

Although they are currently taking their long, winter’s nap, it’s always good to recap the bear aware basics.

For more, read Be Bear Aware in Whistler’s Backcountry.

The safe way to see a bear on your trip to Whistler is with a guide. Bear viewing tours run from May to October with guides who know everything there is to know about our furry friends. Read what it’s like to go out on a tour in Whistler Bear Viewing Safari Experience.

This post was written in partnership with AWARE, a member-driven charity that works to protect the natural environment in Whistler and the Sea to Sky through advocacy and empowerment of others via science-based research, education and programming.

Natasha Way is an Environmental Program Coordinator with AWARE Whistler, deeply committed to conservation and climate action at all levels. Natasha can generally be found with her dog out in the Coast Mountains on skis or a mountain bike.