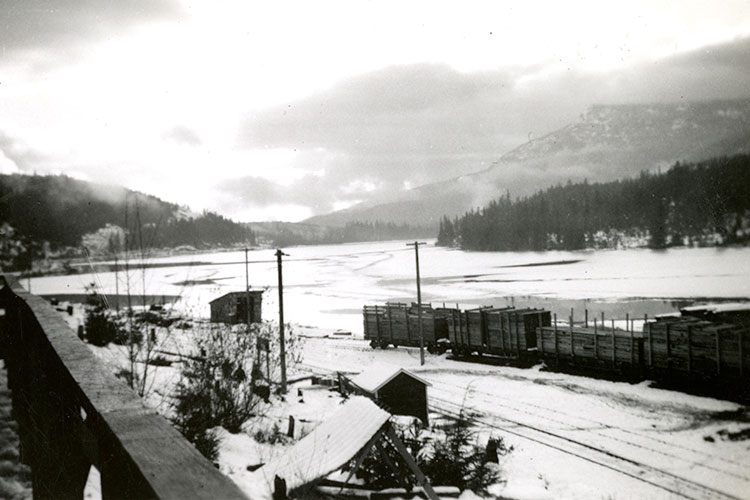 Meet the Ghosts of Whistler

Every town has its local legends and ghost stories, and Whistler certainly has its fair share of these to tell around the campfire. Like with any town where locals love to wow visitors and newcomers, sometimes a detail or two gets embellished, so please take the below with a pinch of salt (then throw that salt over your left shoulder).

Although Halloween celebrations, like Whistler Frights & Delights, aren’t going ahead this year, we can still have some spooky fun. The Insider decided to delve into the ghostly underworld of Whistler and dig up some stories with a creepy twist. And, if you like what you read here, consider a visit to the Whistler Museum, located right in Whistler Village, for more background on our mountain resort’s history.

Back in the early 2000s, a young girl was having dinner with her family in a restaurant called Uli’s (now Creekbread). As she gazed out of the window into the dark evening sky, the figure of a woman suddenly appeared in her view. Eerily pale, with long black hair and a white dress, the woman meandered along next to the window and then vanished.

Understandably unnerved by what she had just witnessed she told her parents who joked that it was probably the ghost who haunts the building. They were referring to reports of a ghostly female spectre, which dates back to the 90s when the building was an Italian restaurant called Settebello.

The reports mention her floating down from the rafters to the middle of the room and hovering about ten feet up in the air before disappearing as she reached the back door. Occasionally, she was spotted sitting up in the loft, laughing with a child ghost, the lights flickering off and on and things unexpectedly falling off shelves.

Rumour has it that the two ghosts are a mother and child who perished in a building fire – however, this is one detail that may be one of those embellishments we mentioned before as the Whistler Museum has no record of a fire in that building since it was constructed (back in 1979).

In 2009, when the building was being renovated into its current incarnation as Creekbread (a must-visit if you like pizza), the oven builder and co-owner of the new restaurant spotted the ghost, while the other owner spotted her on a different occasion while working late.

Perhaps these close encounters were why Creekbread was amenable to allowing two psychic mediums to visit three years later, with the intention of communicating with the restaurant’s resident ghosts. It seems they were successful and managed to convince the ghosts to move on to the next stage of their afterlives as there hasn’t been another report of a ghostly encounter in Creekbread since (just reports of really good pizza).

Multiple people who were lucky (or unlucky) enough to spot the Creekbread ghost reported another spiritual presence in the neighbouring building, Whistler Creek Lodge. Housekeepers and employees of the lodge tell stories of the ghost of an old man who wanders the hallways. Some only felt a sinister presence, while others spotted his figure in the stairwell.

His name is Bill.

Some say he was a friend of the woman haunting the Creekbread building – although if that was a pre- or post-death friendship, we don’t know. Apparently, he is quite stubborn and isn’t tied to the Whistler Creek Lodge building itself, but rather to the surrounding area in Creekside – he just likes the lodge.

Sources report that Bill was a logger at the south end of Alta Lake around the beginning of the twentieth century but there was never a logging camp in Creekside, so that aspect of Bill’s story doesn’t line up. However, the Whistler Museum helped me track down information on Bill Bailiff, who was a UK immigrant well known in Whistler (back then the community was called Alta Lake) in the early 1900s.

He arrived in Alta Lake around 1913 after quitting his job working on the Pacific Great Eastern Railway. He settled in a cabin on the west side of the lake and became a trapper. Although he was a logger before he moved to this corner of BC (maybe this is the logging connection), there isn’t any record of him working for logging companies in the area.

In 1933, Bill helped build Jordan’s Lodge in Creekside (now the site of Nita Lake Lodge). This connects him to the Creekside area and means that Bill Bailiff could very well be our Whistler Creek Lodge spirit. From all accounts, he was a gentle, community-minded man when he was alive and he is probably just keeping a posthumous eye on his little community of Alta Lake.

While Bill and the Creekbread woman are the two most prominent ghosts in Whistler, there are plenty of other spectral sightings. From flickering lights and haunting noises backstage at the Maury Young Arts Centre (didn’t you know all theatres have a ghost?) to a little girl ghost at Southside Diner who only appears to women at night, there are spirits abound in our little town. A colleague of mine even shared a story of getting pinched on his rear end by seemingly no one at all one night in a remote cabin south of Whistler, but maybe he’d had one too many, um, s’mores around the campfire that evening.

There are even tales of a ghost cat living in a ski chalet in the Whistler Cay neighbourhood. It jumps onto beds and curls up with tenants, rubbing against legs and meowing – the only thing is, they don’t have a cat. The same household described having trouble keeping a fire going in their hearth, having trouble with furnaces, as well as a memorable incident where a cutting board went flying across a countertop and onto the floor. That last occurrence was almost definitely the ghost cat, our four-legged friends do love to knock things over for attention and ghost cats are apparently no different.

Another spooky tale is the disappearance of Ernie Archibald and the death of his friend George Trites in 1938. The Whistler Museum provided this tale in response to locals reporting ghostly figures and lights over Alta Lake each winter when the lake ices over.

The story goes that the two men were crossing the frozen lake from Ernie’s cabin to visit a friend on the other side; leaving a lamp burning in the window to light the way for a return they’d never make. No one knows what happened to Ernie, but George was found in the lake days later with a large wound on his forehead, with the sleigh mysteriously sitting on top of the ice. It is an unsolved, possible murderous story, hidden under the lake.

Nestled on the eastern shore of Green Lake, on the north end of Whistler, lies Parkhurst. Once a bustling sawmill and logging town, Parkhurst was active from the 1920s – 1950s, and is now a popular hiking and biking route.

Accessible from the Wedgemount Lake trailhead parking lot or from the Lost Lake network, the trail takes you to a jumble of relics in the forest. A gentle loop takes you past collapsed cabins (there is actually one last standing cabin), abandoned vehicles, oil cans, 1950s-era appliances and rusty bedframes, which are slowly being reclaimed by nature.

While there are no (known) ghosts in Parkhurst, it is a unique place to explore a piece of Whistler’s settler history. I would suggest a take nothing but photos approach to your visit. On one memorable occasion, my friend decided to take an interesting-looking brick from the foundation of a collapsed building in Parkhurst. After lugging the brick home to display in her backyard, she proceeded to have nightmares about the ghosts of Parkhurst coming to retrieve the brick. She returned it to its home in Parkhurst a few days later.

So, you never know, maybe there are some spooks and spirits to be found in Parkhurst after all – just don’t take home a haunted brick (or anything else) in the hopes of luring one in.

All towns have ghost stories to tell. Whistler’s rich history, from remote fishing destination to world-class ski resort, was bound to result in the Insider digging up some colourful characters. However, we never imagined Bill Bailiff would be checking in on us from the grave or that lights on the lake could be two souls trying to tell their story of what happened on the ice that fateful winters day.

Enjoy your Halloween, stay safe and keep an eye out for Whistler’s spooks and spectres if you’re up here with us in the mountains. You’ll also notice that the snowline is creeping down the slopes, so book by December 1, 2020, to get the best deal on your winter holiday, and please, bring your face mask with you.

Katy is BC born-and-bred. She originally moved to Whistler for a summer and slowly learned to appreciate winter as well. She hikes, paddleboards, crafts and is usually the first person people come to when they have a cute dog photo to share.

What’s New and Noteworthy for Cornucopia 2020