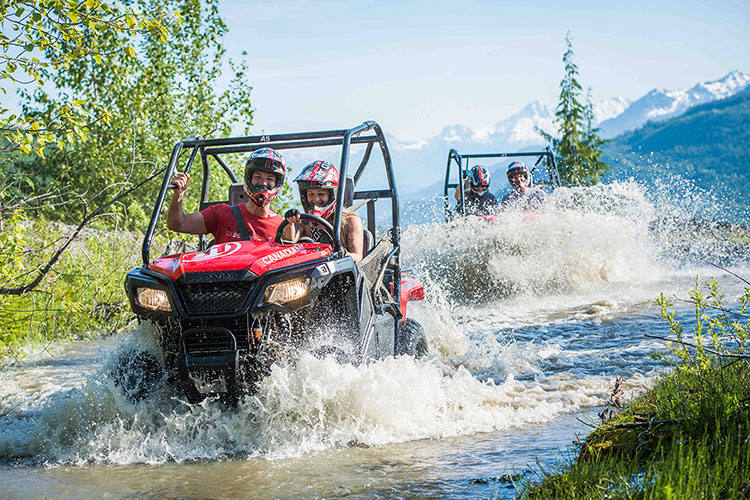 My ten-year-old son was not into it.

“Crazy is relative,” I replied, “and also, that just isn’t true.”

In his entire lifetime my driving record is near perfect, only one speeding ticket (oops.)

“You almost drowned us on the Sea-Doo!”

Even that is a bit of a stretch. We didn’t even fall off, and certainly were nowhere near drowning, but I suppose nose-planting a high-performance watercraft into a tight-radius donut at 50 kilometres per hour could feel like something a crazy person would do to a child out on his very first Sea-Doo ride.

“You don’t really have a choice.”

The new adage is that the most important aspect of parenting is showing up, meeting your kids where they are at and holding space for their needs. That’s fine and makes sense, but I wanted to close our summer out with a new experience and a bit of high-octane bonding so I rallied the child, ignored his hesitancy, and off we went to Canadian Wilderness Adventures’ basecamp deep in the Callaghan Valley for an afternoon rip on their off-road mountain buggy tour.

The buggies do look and feel a lot like off-road golf carts (with two- or four-seater options) so it’s not like I was misleading him.

“I want to sit in the back! Like a limousine.”

Let the record show, my son has never ridden in a limousine, but he later confided that he thought the back seat would be safer. After being fitted for helmets and goggles (sterilized with UV light and liquid-spray cleaners after each use. Face masks are also mandatory under the helmet), and a short operations and safety briefing, he buckled himself up back there and we were on our way.

That lasted approximately three minutes, until the brake test. This test, and a few early steering challenges, help the guide ensure that everyone driving the machines is capable and safe. The buggies are incredibly intuitive for anyone with a driver’s license — there’s a steering wheel, a brake and a gas pedal…that’s it.

After I passed the braking test with flying colours (a.k.a. a wicked crunching gravel sound and a dust cloud), my son decided to relocate to the front so we could sit, as the French Canadians say, “side-by-each.” I like to think it was because he wanted to be closer to me for this most-excellent shared adventure we were about to embark on, but I realize that it just as easily could be because he wanted to fidget with glove compartment.

And away we went, bumping and weaving our way uphill, blasting past lush, coastal rainforest and catching frequent views of the Callaghan’s mountain-amphitheatre scenery with Black Tusk jutting up on the eastern horizon. My son, familiar with the landscape because he’s known it his whole life, opted to remain focused on the road, “looking for wildlife,” he later explained.

Like many parents, I am raising my kid in a culture saturated with screens, games, devices and online conversations. The COVID-19 pandemic and subsequent quarantine months only elevated my desire to get the lad outside for as many fast, dusty, muddy, skinned-knee, heart-pounding adventures as possible before the autumn rains, school and flu season kicked back in. The idea of zipping around a mountainside on a motorized contraption with the wind in our faces was exactly the sort of expedition I craved, and I hoped he did too.

“Do you like it?” I shouted over the engine.

He nodded, even high-fived me, but didn’t seem as enthusiastic as I’d expected…until we hit the water section. Part of the joys of exploring the snow-capped Coast Mountains is we are never usually that far from a water source, and the Canadian Wilderness Adventures’ terrain includes a highly scenic lake and a nice section of creek bed and pools that just so happens to be right alongside the buggy roads.

I’d previously enjoyed this water feature while test driving the Porsche Cayenne, so I was familiar enough that we came in hot, easily twice the speed of anyone else in our group. Water shot up and entirely over our buggy, soaking both my son and I in crisp snowmelt runoff. Bingo!

“Holy cr…” he stopped himself in time, surprise and joy shining right thought his muddy goggles.

“What did you think about that?”

It was a one-word answer— well, one word repeated a few times. “Again! Again!”

With all concerns for my (totally responsible and safe) driving washed away, the rest of the tour was a breeze. Squealing down a steep no-look drop-in hill, we bombed a few laps through the Vortex, a custom-built track of berms and bridges (think bike-park-meets-go-carts) and stopped at a few historical or ecological education points that maybe felt a bit too much like school in the summer to a kid. But the allure of adventure that comes with the words “abandoned gold mine shaft” grabbed his attention quickly enough and he was pumped to be able to identify the mining core samples before any of the adults (no, you can’t keep them.)

By tour’s end, our masks were caked in dust, our shorts were still damp (wisely, our guide offered a second pass through the water features on the ride back down,) and my son seemed to have grown to trust my off-roading skills enough to have finally relaxed and enjoyed the ride.

“You liked the water section the most?”

“You want to go Sea-Dooing again then?”

I don’t know if I’ll ever have parenting figured out, but I know it’s definitely easier the more time you spend outside.

The off-road mountain buggy experience with Canadian Wilderness Adventures is $249 for the two-seater option and $349 for the four-seater. Children must be at least eight-years-old and the driver must be 19 or over with a valid driver’s license. Speak with a Whistler.com agent to find out more.

Summer room rates with Whistler.com start at $93 and there are deals to be had on longer, midweek stays and activity bookings (free $50 adventure voucher when you book for three nights or more). If you’re a BC resident, sign up to become a Whistler Rewards member (it’s free) for more specials and savings.

If you have any questions, the Ask Whistler Live Chat Service is available seven days a week from 8 AM to 9 PM PST via Facebook Messenger, WhatsApp, SMS and phone. Whistler.com also has a COVID information page for the latest updates and health advisories for Whistler. 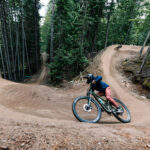