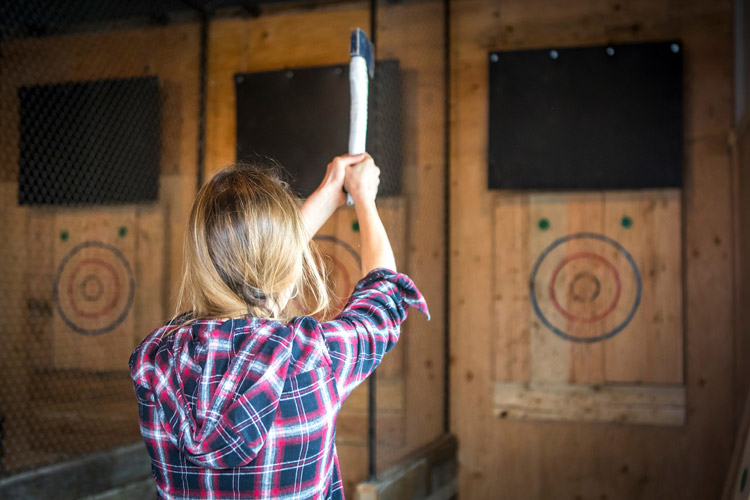 Fear of Flinging: How I Conquered the Axe-Throwing Challenge

While Whistler inspires a visitor to move in unexpected ways, few activities can compare to the stretching – most of it mental – at Forged Axe Throwing, the resort’s recreational axe-throwing arena in Function Junction.

Skiing and biking, swimming and hiking, I’d mastered the more commonplace. But was this fifty-something woman with dodgy knees and some upper arm jiggle ready to become a later-in-life lumberjill? In a warehouse awash with steel blades, defined biceps and youthful exuberance, could I find the confidence to conquer the axe-throwing challenge? Almost as importantly, did I have to wear plaid? The folks at Forged Axe Throwing are there to help (well, maybe not on the fashion front).

Krista Mackie, 31, Forged’s operations manager and a keen competitive thrower, has taught all sorts of people to appreciate the axe in her nearly two years with the sport. But could she coach along this reluctant rookie, more comfortable at a keyboard than grasping an axe knob? “All ages, all abilities,” assures Krista, with an enthusiasm that’s infectious.

Let’s take a moment to consider some details. The standard throwing implement is a hatchet. Held firmly by its wooden handle, the hatchet is thrown from a designated line down a lane towards a wooden target, which consists of a bullseye, two outer rings and other scoring elements. Seems simple, but there’s much more to the rules of play as detailed by the National Axe Throwing Federation. It supports safety, sportsmanship and protocol for the serious competitor, which I was not.

Forged is a balance of discipline and delight. Its high-energy team teaches several throws. There’s the straightforward single-rotation throw – this involves one well-grasped hatchet. They’ll instruct on what they call “doubles”. This involves two hatchets, one in each hand, thrown simultaneously. I hoped this might increase my chances of scoring a bullseye. It did not.

Then there’s big axe. True to its name, it is the all-rounder of the axe world. When there’s a tie in competition, big axe resolves the unresolved. Seeing this proper chopper, it is easy to understand why.

At Forged, where brains and self-belief matter more than brawn, you’ll be encouraged to try it all. But only after a safety briefing and with instruction, support and guidance along the way. Staff insist on a few golden safety rules, among them not collecting an axe from the target zone while others are throwing. Makes sense, really.

Forged’s oldest guest so far has been an 87-year-old grandmother who visited with a wedding party, says co-founder James Anderson. He cooked up the Forged concept with a friend during a bachelor party and opened the venue in 2017. Oh, and that grandma … she landed a bullseye on her first attempt, says James. No pressure, then.

The axe is an ancient implement. Useful for cutting, chopping, piercing and chipping, it was also handy in combat. An axe inferred status and was steeped in symbolism. In Europe’s prehistoric Thunder cult, for example, the axe was linked to thunderbolts hurled by the sky god. Those were Neolithic times. Still, I hoped for a bit of sky god help the day I visited Forged.

The axe remains an item of fascination. So do the people who throw. In the competitive realm, each player has a nickname. Krista’s is Phoenix, the bird of Greek mythology that gains new life by rising from the ashes of its predecessor. “I wanted a built-in excuse in the nickname,” says Krista, mindful of the potential for competition crash-and-burn. The national federation, established in 2016, supports 6,000 throwers in a half-dozen countries. Men and women compete on equal footing and overall league membership is about 45 percent female, Krista says. Players support each other, even during intense competition, says Krista, who enjoys that vibe. Seems to be a sport where there’s no axe to grind.

Competitors form a connection with their axes, even giving them names. “They become your little axe family,” Krista says. Her two competition hatchets, Bonnie and Clyde, were named by a Forged guest. Her big axe is Agatha, which has an almost Viking feel. Competitors create narratives around their throwing by decorating the hickory or ash handles with runes, engravings, sparkles and the like.

My focus while at Forged was also on the axe handle, but for different reasons. I was thinking, too, about the blade, which Krista had recently sharpened. And the target. And my toes. There’s a lot of thinking that goes into this game.

Krista loved the sport from her first throw but insists she was not a natural. It took time to develop. She is, however, a natural teacher. Krista can watch and assess a player, tweaking grip and stance, to tease out the best throw. And so she encouraged me.

I ask Krista if she finds the sport empowering, but don’t wait for her reply. Having confidently managed various throws with the hatchet, I am confronted with Agatha. After failed attempts to get the big axe anywhere near the target, and several subtle adjustments, I hoist Agatha over my head one last time. Taking a deep breath, I utter words of self-belief then hurl Agatha forward. It is satisfying to watch the blade wedge firmly into the wooden target. And I am here to tell you: axe throwing is absolutely empowering.

Nuts and Bolts: What You Need to Know

Forged is about 7 kilometres / 4 miles south of Whistler Village, a short drive along the Sea to Sky Highway. It is serviced by bus number 20, which runs regularly from the Gondola Transit Exchange. The venue is open seven days a week. Prices vary for one-hour sessions, which can be booked online. The minimum age to throw is 10. Those under the age of 18 must be accompanied by a parent or guardian. Closed-toed shoes must be worn.

Function Junction (or Function, as the locals call it) offers useful retail and is home to breweries and several eateries with a local vibe. The iconic train wreck hiking trail and the informative Whistler Interpretive Forest are on the other side of the Sea to Sky Highway in the Cheakamus community. Why not couple a trip to Forged with a hike, a coffee or a brew and make an afternoon of it!

Anyone can throw an axe. Still in doubt? Why not take on the challenge? Visit Whistler.com for more details.

Abby Deveney is a fair-weather skier, cyclist and walker. She’s also a writer and editor who wonders endlessly what’s on the other side. 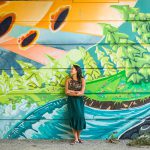 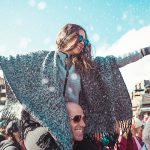 Celebration. Is It in You?