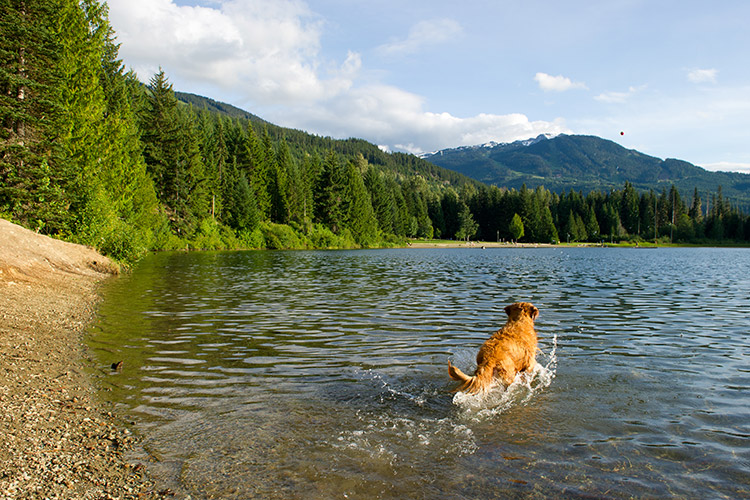 From taking time out to play to being good adventure buddies and knowing how to completely relax, dogs have plenty to teach us about living well.

We chatted to some of our Instagram-famous dogs (and their owners) for their take on living the good life in the mountains.

Gary is a two-year-old Brindle Bulldog who lives with his owner Joe Barnett.

Insider: Gary seems to hang out in the Village a lot, does he have any favourite dwellings?

Joe: We (Gary and his humans) live in the Upper Village, so it’s our fave. Actually, for some reason Gary doesn’t like walking through the main Village anymore. He loves summertime patios at the Handlebar and the Fitz Pub and especially playing on the slopes at the bottom of Blackcomb.

Hanging out in the grass at the bottom of #Blackcomb, one of my favorite places! #bulldog #whistlerdogs #englishbulldog #dogsofinstagram

Insider: Is Gary more of a summer dog or a winter dog?

Joe: He likes both! Though summer gets too warm for him (but dipping his feet in Fitzsimmons Creek helps). He also likes running through the snow, but extra-cold weather makes for some cold paws.

Insider: What is Gary’s favourite activity?

Joe: His favourite game in the world is “I have this stick/toy and you should try to take it from me.” He loves to run around taunting you to take it. It’s also the only time he growls, but he’s just being playful. He’s never been mad at anything living.

Insider: We noticed Gary is a member of the #squishyfacecrew – are there any other members?

Joe: All the other squishy-faced dogs! (Other Bulldogs, Pugs, French Bulldogs, etc.). Gary has a crush on Luna, who lives in our building, but she doesn’t feel the same way.

Oscar is a seven-month-old chocolate Dachshund who lives with his humans, Andrew Christodoulou and Carly Depatie.

Insider: Oscar is brand new to Whistler life! What are his favourite aspects so far?

Andrew/Carly: Oscar’s favourite aspects are getting carried through the Village and catching the attention of new friends. He enjoys hanging out with his new friends and chewing on all the sticks that Whistler has to offer.

Sticks are my fav 🌲

Insider: Where does Oscar like to hang out the most?

Andrew/Carly: He is still too young to explore the doggy parks and trails, but he loves sniffing around in the backyard and snuggling up with humans.

I pray for World Peace, Dog Treats, Long Walks, and no more Leashes 🐶🌭

Insider: What is Oscar’s favourite activity?

Andrew/Carly: His favourite activity is launching himself onto or into anything or anyone. And he loves his weekly puppy school.

Insider: What is Oscar most excited to do this summer?

Andrew/Carly: This summer, Oscar is most excited to lizard in the sun and swim in the lakes with his new life jacket he will be getting.

Eva is an avalanche rescue dog who works with Matt O’Rourke for CARDA and Whistler Blackcomb.

Insider: How would you describe Eva’s personality?

Matt : Sassy! But she knows when it’s time to get serious at work!

Insider: How does a pup become an avalanche dog?

Matt: Puppies are chosen for having high “search drive”. They begin at a young age by playing hide and seek with their owners. Their reward for being successful is a game of tug with an article like an old wool sweater. This progresses to playing hide and seek with other people, then eventually to finding people who are hiding in small snow caves, all while being rewarded with the game of tug. Eventually, we bury scented articles in the snow and the puppies find them and dig them up.

Sunday marked the last day of this dogs first winter season on Whistler Mountain. So many amazing experiences, so much progress, and so many lessons learned. Huge thanks to the @whistlerblackcomb Ski Patrol for all the help and support. Looking forward to many more winters to come! 📷 @abradleyphoto . . #CARDA #avalanchedog #teameromit #mountainpuppy #whistlerdog #labsofinstagram #americanlab #evaslife #skipatroldog #avydog @ruffwear

Matt: Searching! But in the summer, she loves to swim.

Insider: Where is Eva’s favourite place to hang out?

Matt: The Peak of Whistler Mountain in the winter. And by the lake in the summer.

Taylor and Moe are eight- and two-year-old (respectively) trail dogs who live with their owners, Dylan Forbes and Lauren Robinson.

Insider: Where are Taylor and Moe originally from?

Dylan/Lauren: Moe has lots of energy! This is due to her mixed breed (Husky/Akita/German Shepherd). She is always happy to see everyone and is not scared of anything. Moe has a cheeky side; she likes to push boundaries with us. She knows when she’s done something wrong and can’t hide it; she gets the biggest puppy eyes and her ears lay flat. She loves mountain biking with us and she’s very loyal. Taylor is almost the complete opposite of Moe. She has anxiety and separation issues and it takes a while to gain her trust. Once you get to know her though, she is extremely affectionate, gentle and asks to be petted by pawing you.

Insider: What are their favourite things to do?

Dylan/Lauren: For Moe, anything outside/adventurous is his favourite. More specifically, mountain biking. Taylor loves cuddles and walks in Spruce Grove Park, Meadow Park or the Wedge area. They both love anything to do with water, lakes and rivers.

Insider: Where is their favourite place to hang out in Whistler?

Dylan/Lauren: The bike trails or our backyard. Moe also likes to hang out at Lift Coffee Co. in the Village!

Charles is an 11-year-old Samoyed who has lived in Whistler all his life with his human Drew Dodman.

Drew: He’s very laid back and can often be found sleeping in the middle of busy hallways. He’s also obsessed with cats, but his human won’t get him one.

Drew: Without a question, it’s diving for rocks at the lake.

Insider: Where is Charles’s favourite Whistler place to hang out?

Drew: Alpine Café – where everyone is willing to share their bacon and eggs.

Insider: Charles seems to have a bit of a Samoyed squad – who are all his friends?

Drew: Although he is very much a lone wolf, Charles has been spotted with many other white fur balls, among them – his pal Ceelo (@saomyed.ceelo), Casio and Luna.

Insider: Does Charles like the summer or the winter better?

Drew: He appreciates all seasons and is able to get the most out of both summer and winter. For every day spent at the lake, he gets just as much enjoyment cross-country skiing.

Insider: How old is Timber? How long has he been in Whistler?

Kate: Timber is just over a year old! His birthday was May 2nd. He was born in Kelowna, but has been here since he was six and a half weeks old.

Kate: He loves hanging out with friends in the forest. He loves being chased!

When you just love the beach

Insider: Where in Whistler does Timber most like to hang out? Favourite dog-friendly place?

Kate: He hangs out primarily in Function Junction. We live down there so the woods are our backyard. He loves the Duffey too. I feel like I am taking him home up there. He loves anywhere that isn’t too crowded and he can run off leash with other dogs.

Mom had the shave part of my neck after this…. #hairgrowsback

Insider: Arctic wolf Malamute is pretty unique! How did you find him?

Kate: I have a couple friends with wolf dogs and fell in love with the breed, so I started to research it. I looked into breeders and applied to get one but didn’t hear anything for two years. Timber was from a litter that I wasn’t in line for because of his content. However, they had multiple people back out and couldn’t find a home for him. The breeder called me up and said he was too old to stay with them and that they were going to send him to a sanctuary the following week, so I drove up and got him the next day.

Insider: What adventures are you most excited to embark on with Timber this summer?

Kate: I would love to do more big missions with him. I need to get him used to a tent, or staying close to the tent, so that is the goal this year. That way he will be strong enough to tour with me next season!

Tusk is an almost one-year-old Malamute who is owned by his human, Juliana Tyndorf.

Insider: How old is Tusk? How long has he lived in Whistler?

Juliana: Tusk is 11 months old. We’ve lived in Whistler for 12 years and he’s been here since he was eight weeks old.

Juliana: Tusk loves summer. He enjoys the Rainbow, Alpine and Emerald trails and splashing around in the lake to cool off.

Lake days are almost back!

Insider: Where in Whistler does Tusk most like hang out?

Juliana: He loves the Village Stroll because he gets lots of attention. He loves puppies and all the dog parks and is most happy wrestling with other playful pups.

Me and my mom #wcw

Insider: What adventures are you most excited to embark on with Tusk this summer?

Juliana: He’s just getting used to the canoe, so we are most excited to take him camping for the first time.

I’m the king of the world 🚢

Can I bring my dog to Whistler?

Take a moment to check out the Resort Municipality of Whistler’s Dogs in Whistler page for important information on leash laws and pet identification before you travel. And please, wherever you and your pal go, practice the Leave No Trace principals to ensure the trails and parks are left for others to enjoy. There is no dog poop fairy, do your bit! 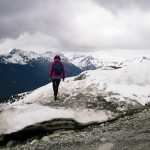