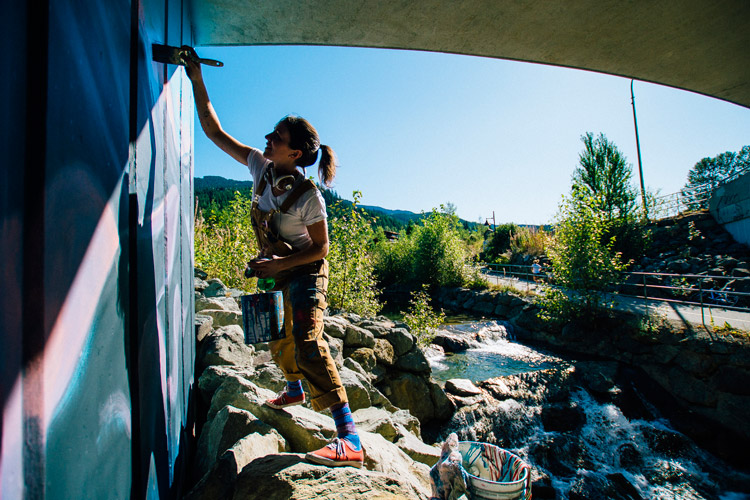 5 Things I Learned from Painting the Creekside Underpass Mural

The results are spectacular, but the process of creating the mural was an immense artistic, logical, physical and mental challenge – here are Jessa’s learnings, shared for anyone taking on new artwork – or a change in their life.

Stepping up to this project was a massive emotional challenge. I had never committed to something of this scale (by a long shot I must admit), and the project quite literally towered over me for some time. I had a vision of how I wanted it to look, but I hadn’t a clue where I should start or how to get there. After spinning my wheels for a few days I decided to get to work on the scale and medium I understood best; I went back to my sketch book.

It may sound silly to use a 5” x 7” pad of paper to get to work on a 2,400-plus square feet artwork, but it’s how I was able to get the ball rolling. I broke down the composition into segments, and I played with the colour palette on a small scale where I could quickly make changes and feel more free to play.

These small studies allowed me to think big while not getting bogged down by the scale of the project.

It’s daunting to look at a blank wall, or canvas, or project where the end result seems eons away, and starting small helped me to remind myself that Progress is a Process. You never start at the end result. You arrive there through small daily practice – one foot in front of the other – inch by inch.

I’ll fully admit that I hate asking for help. I grew up with three brothers who I wanted nothing more than to impress with my ability to fend for myself. This behaviour doesn’t serve the creative process well. I feel fortunate to say that I had a solid group of friends around me who spoke up when they saw me floundering in the beginning stages.

I don’t remember exactly, but I am sure that my initial ask for assistance was an awkwardly phrased sentence of “would you possibly consider maybe… blah blah blah”. The words felt heavy at first, but through time and repetition I realized that help was almost always available in a myriad of forms. Help came in the form of warm food, a place to lay my head, education around materials, lending of equipment, high fives and big hugs. The more I asked for support the more I realized that it empowered those around me and created a stronger community.

I had associated asking for help with weakness prior to this mural, and I’m grateful to have had this experience to teach me the opposite. Asking for help allows you to show your humility, and gives others the opportunity to teach and share. This piece was created for the Whistler community, and in so many ways it was created by it. There’s no need to rewrite the book… ask for help.

Projects are both physically and mentally taxing, especially when they’re situated atop a boulder field and your materials look and feel more like dumbbells than art supplies. I’d do my best to get to the worksite early, as I’m a morning person and feel most alive and creative before lunch. The challenge here was that I’d typically be working on a few hours of sleep, after tossing and turning throughout the night.

I felt wrecked most days after, but started getting into the habit of going to the gym for a good stretch and having a big, warm meal at the end of the day. If it weren’t for some home cooked meals and a few days of bed before nine I probably would have landed myself facedown in the creek. The body will let you know when it has had enough, so best to take care of it.

It’s hard to stop and take a step back once you start working on something. You’re trying so hard to keep the ball rolling that it seems counter productive to stop that momentum and hit pause. There were a few moments where I had my head down with an idea in mind from the beginning that I was steadfast on completing.

One example was the colour palette – I originally wanted the contrast to be high so that the darks and lights would really pop against each other. What I hadn’t considered was that the Underpass is not lighted so the dark contrast colours only served to darken the overall colour of the piece, and in turn added more darkness to the space. I spent half a day covering a large section of the mountain range in a dark blue that I would inevitably cover over in a different hue.

You know that song about leaning on someone? Well turns out it’s true, we DO all need somebody to lean on. And that somebody can show itself in a myriad different ways – through phone calls, high fives, hugs and singalongs. It can show itself as a place to lay your head, a warm meal, and words of encouragement from close or afar. It can manifest itself as shared knowledge, jokes, insight, and an open ear.

I felt overwhelmed by this project at first, and I feel so fortunate to have a strong community that helped me stay upright. I used to think that strength was best shown by doing everything yourself. This mural taught me the exact opposite is true. Strength is shown by one’s ability to show their humility, ask for help, and accept love from others. Strength is gained by finding the courage to say out loud “I need a hand”, and to allow yourself to receive the support offered however it may materialize.

Catch more colorful and inspiring artists from the Sea to Sky Corridor at the ART+Soul exhibition at the World Ski and Snowboard Festival this April. For more on visiting Whistler for an inspiring and creative getaway, visit Whistler.com. 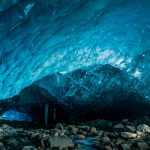 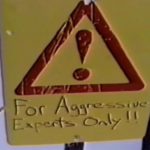