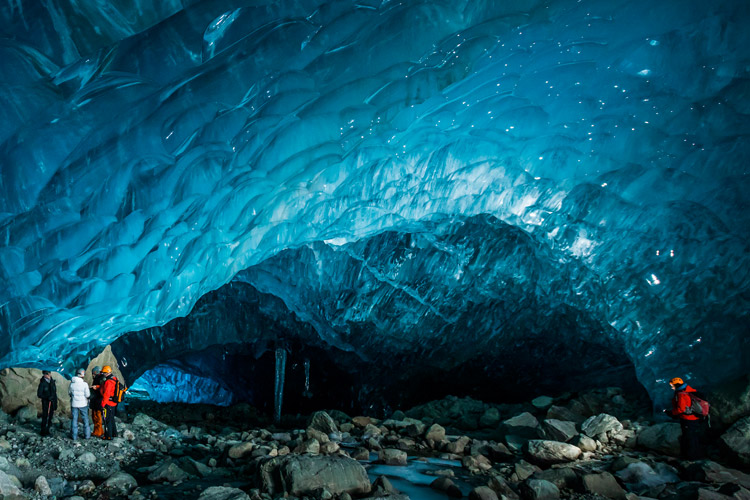 “Time” is a heavy concept. Especially with a couple million tons of glacial ice hanging above your head like a visual record of just how ephemeral a lifetime is on the geologic scale.

Now try explaining all that to an eight-year-old… 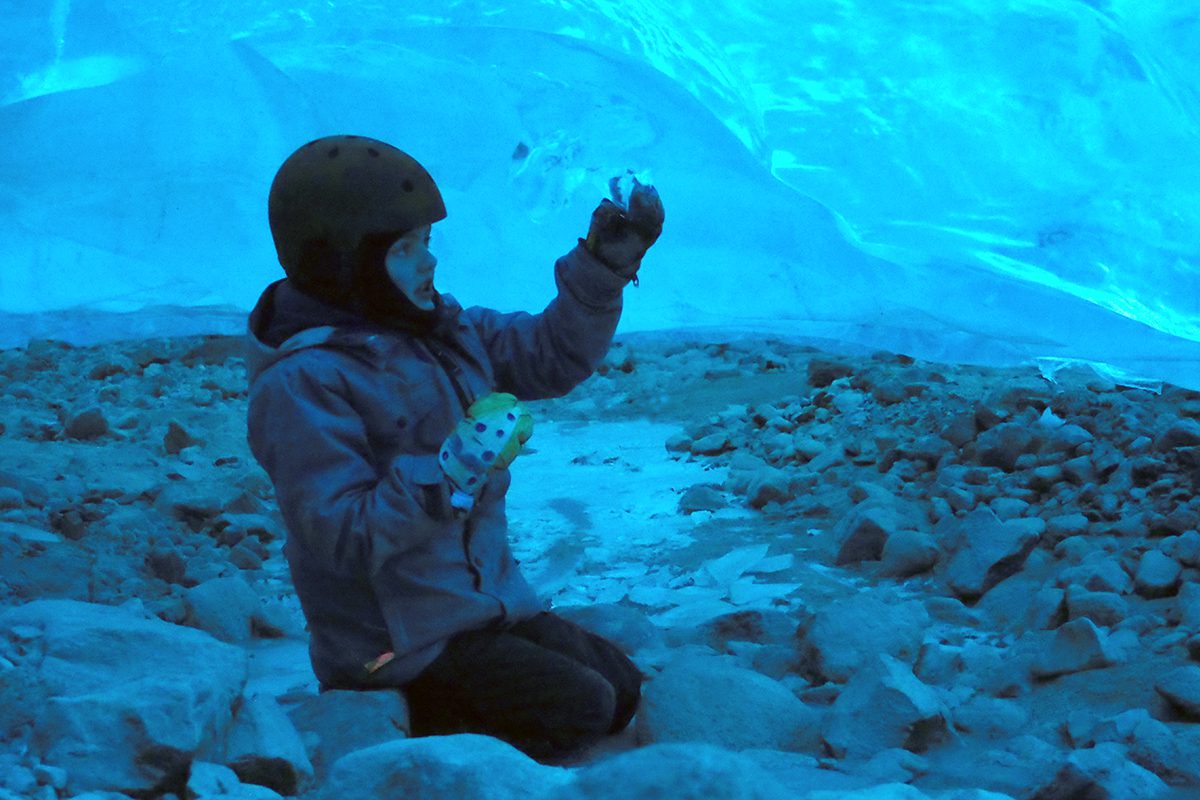 My son and I had lucked out—a perfect bluebird Whistler day, his first ever helicopter ride, and the chance to explore a glacial ice cave with Head-Line Mountain Holidays. Flying in, we passed a towering black mass of rock, unnaturally flat on top like some sort of footrest for the gods of winter. “That’s called a tuya top,” explains Head-Line guide Paul Carus. “It’s a volcano that erupted under the ice. The lava wasn’t powerful enough to melt through to the surface so it just hardened up and formed this massive rock plug.”

That the dark, rocky summit currently towers hundreds of metres above the ice only drives things home. This ice cap is huge, but it used to be hundreds of times larger, and so dense that even boiling magma from within the earth could not penetrate her surface. Time, man, what a trip. My son might not be catching the full impact of seeing geologic time firsthand–he’s too busy making mountain goat calls over the helicopter intercom system. He’s actually pretty good.

The 50-kilometre ride in is a full-on “flightseeing” helicopter tour of the Whistler area– forests, rivers, summits, peaks, seracs, glaciers, that giant freakin’ volcano– and then you get to the main attraction. We duck out of the chopper and literally hold onto our hats as it takes off. Moments later all is silent, white and stunningly beautiful. 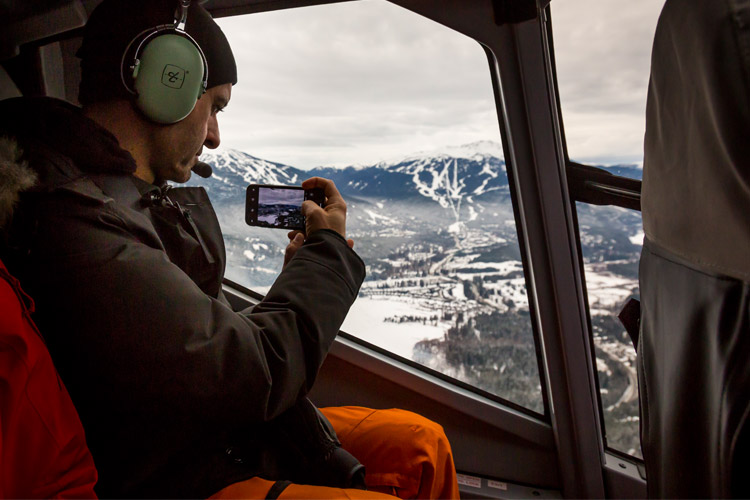 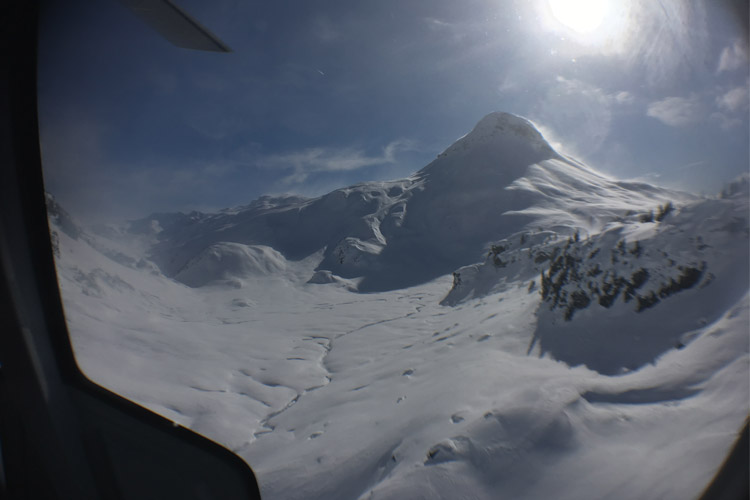 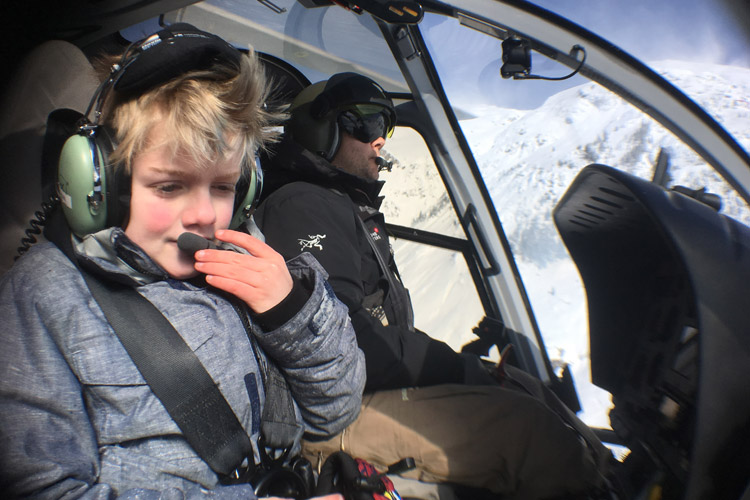 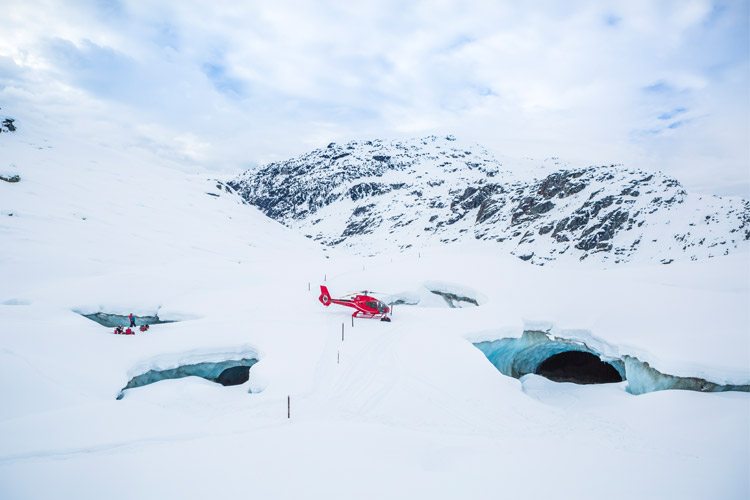 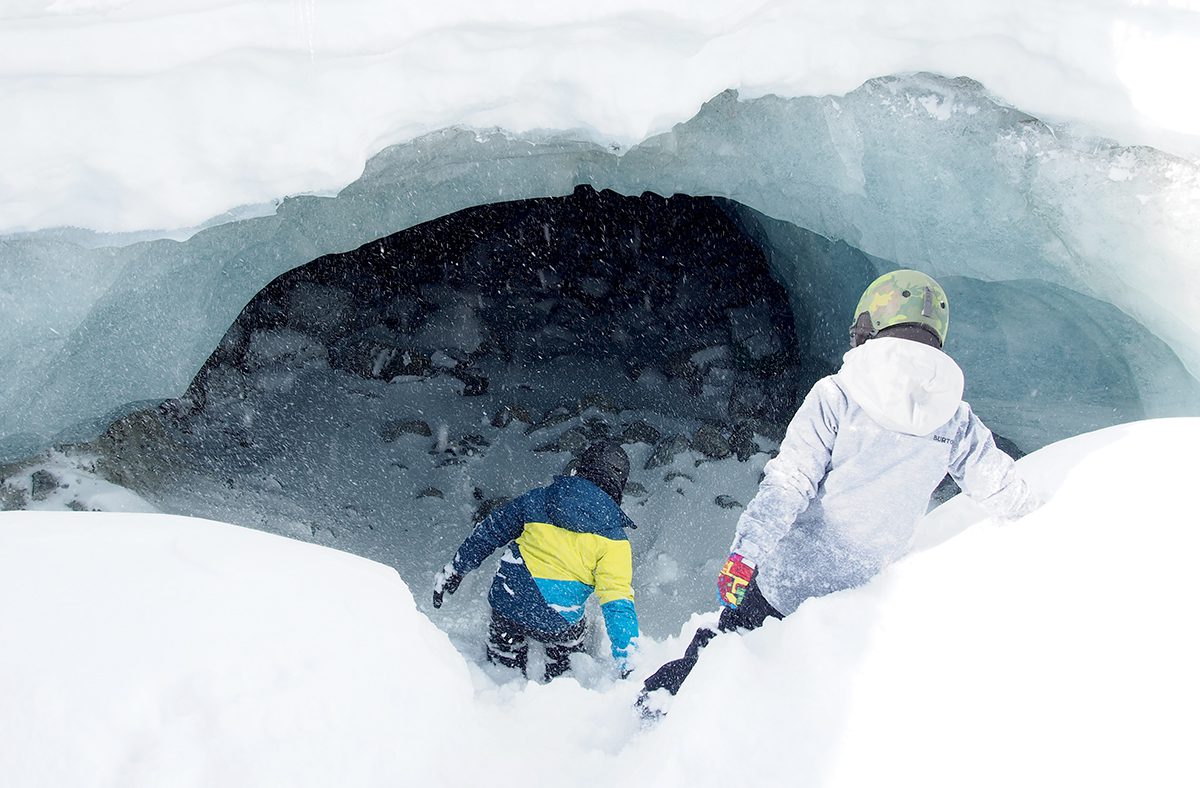 “So where do you think the entrance to the cave is?” Paul asks before pointing out where the toe of the ice cap extends onto the rock of the mountains. That everything is under more than ten feet (3 m) of snow doesn’t seem to hinder his ability to distinguish the terrain.

Carus studied Glaciology as part of a Physical Geography degree before putting down roots in the Sea to Sky region over two decades ago. After three years of leading ice cave tours with Head-Line, it’s safe to say that very few people in British Columbia spend as much time under a glacier as he does. 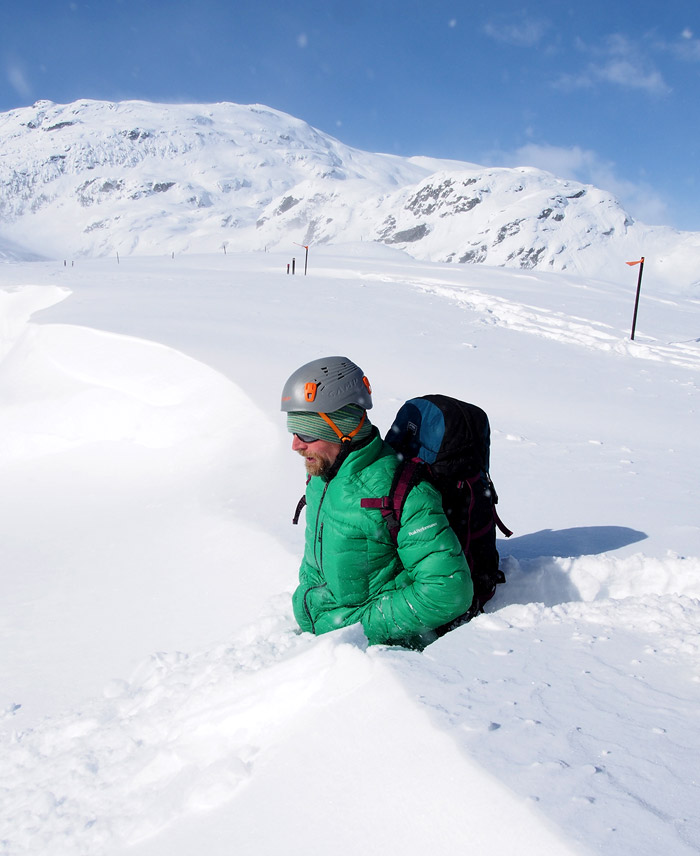 For the rest of us, it’s a descent into a bold new world. There is sunlight but no sun, just a solid crystalline sky meeting a horizon you can reach out and touch. There’s a luminescence to everything and a deep sense of history, almost like a museum. Time bends and the minutes seem to dissolve in the invisibly clear streams that trickle through the sand and towering monoliths of white ice. It’s part movie set, part dreamscape, and while we all have our phones out to snap photos, the idea of cell phone reception here feels so foreign that no one even bothers to check. The cavern commands our attention and awe. Or as my son put it, “Hooooolllly geez!”

“That is one of my favourite things about bringing people here,” Paul says as we duck into a tunnel no one noticed and crawl into a hidden room of ice. “It’s an adventure, no one is 100% sure of what they are going into but it leaves almost everyone speechless, they don’t know how to describe what they just saw.” 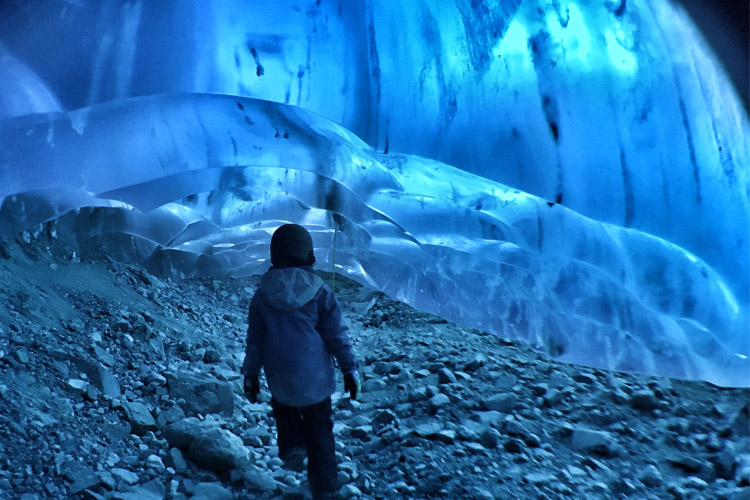 Exploring in the eerie blue beauty of the ice cave. PHOTO FEET BANKS

Paul knows how to describe a lot of it though. Drawing from his education and experience, he explains the rings and patterns in the ice, what each air bubble could mean and how certain features will form over time. But even he admits this is a very alien landscape.

“There are a lot of unknowns in this world of ice,” Paul says. “We’ve had a lot of curious, educated, well travelled guests, so there are great discussions and intriguing questions. One physicist was fascinated with the refraction of light through the ice and was theorizing about how we get that blue hue down there and how it should change with the seasons and times of day. There is a lot of science down here, but there are still a lot of questions too.”

Here’s something you probably didn’t know:

“As the glacier moves over the bedrock it slowly grinds and pulverizes stones trapped in the ice,” explains Head-Line’s Paul Carus as he dabs a finger into a tiny bubble of grey powder trapped in a wall of ice.

“Try some,” he laughs. “There’s no purer way to get your minerals.”

The powder is dry, but not dusty. It tastes clean, fresh and utterly different than getting dirt or mud in your mouth while mountain biking. Regardless, my eight-year-old son is hooked, not just on ingesting pulverized, historical rocks, but on exploring ice caves in general.

And no, “glacial flour cookies” do not yet exist, but he asked.

To help answer some of those questions, including the effects of the current rate of global warming on local glaciers, Head-Line Mountain Holidays started the Ice Cap Research project in collaboration with Simon Fraser University to give students a real-world opportunity to get onto an ice cap, go into a glacial cave and get hands-on learning experiences that budget restrictions usually don’t permit (most glacial research occurs in the Arctic or Antarctic).

“I read a story in the newspaper and discovered that Vancouver scientists were working with information from the far north because there was no local data being collected,” explains Head-Line CEO and President Doug Washer. “I reached out to SFU and found an opportunity where we can share and learn from each other.”

With a small start-up grant and 3% of every Head-Line Ice Cave experience going towards the “White is Green” initiative, Doug’s team and SFU are putting the finishing touches on their own collaborative glacier research station, which will be installed later this spring.

“The idea started three years ago and I just came from Home Depot after buying insulation for it today,” Doug laughs, “but we’ve almost finished building it and soon we’ll get it up in the alpine producing remote, real-time weather data that will be broadcast back to us. The university can use it for research and we can use that data on our tours.” 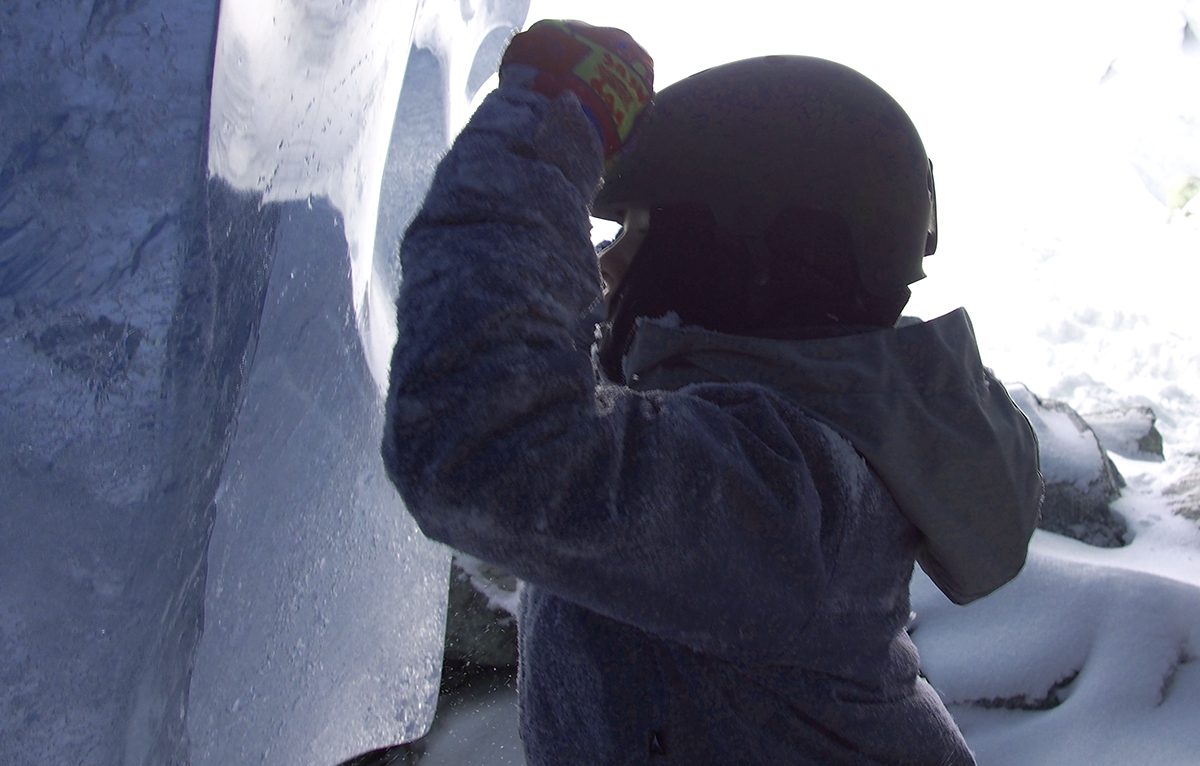 Peering into the past. PHOTO FEET BANKS

For Doug, it’s especially interesting to learn more about these glaciers because he has watched them recede significantly over his life. “The first ice cave I was in was probably 27 years ago,” he says. “And I haven’t gotten any precise measurements, but it was probably 1.5 kilometres downstream from where the toe of the ice is now. I can see full waterfalls outside on the bare rocks now that used to scare us because they were inside the ice.”

“Global warming has been going on since the last ice age,” Doug says. “Of course it is warming, but to what degree are humans playing into it? One thing we are learning in this program, a glacier doesn’t melt the same as an ice cube. It’s more deflating than anything, melting from the sides and the bottom as much as from the top. That drives me–the experiences we get up here and the take away that maybe what I thought was happening isn’t happening.” 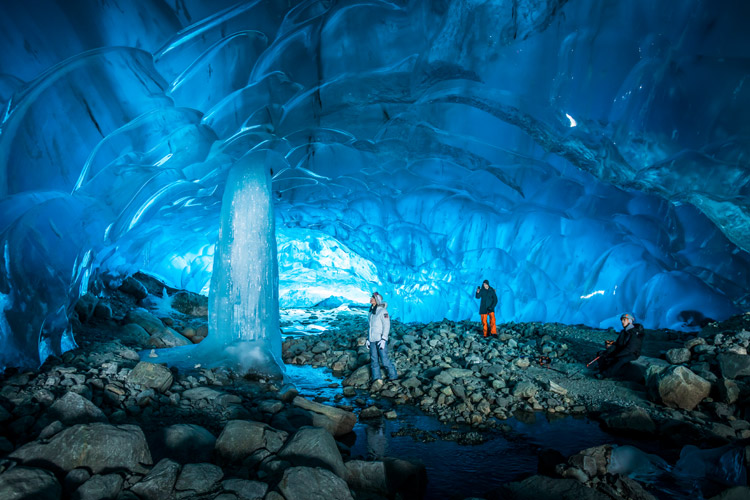 No two days in the ice cave are the same – this image was taken late in 2017. PHOTO JUSTA JESKOVA

Time is a heavy concept, and change might be the only constant. On the heli-flight home I questioned my son (sitting up front right beside the pilot) to see just how much of Paul’s knowledge he’d understood.

“Well it takes like a million, thousand years to make rock powder (see sidebar) but if any dinosaurs fell in there they would have been ground up too . . . maybe into dinosaur powder?”

That was good enough for me. In science, and time, it’s good to know there is always another question.

One thing is certain however; the ice caverns of the Coast Mountains are utterly world class, and constantly changing from one season to the next. Through empowering local glacier research and sharing the mind-melting experience of exploring these caves, Head-Line Mountain Holidays is combining science and adventure in a very impactful way. The ice caps surrounding Whistler have been here for over ten thousand years, but when it comes to venturing into the luminescent world beneath the ice, there’s no time like the present.

Heli Ice Cave Explore Tours are available year round. Book an Ice Cave adventure, and all sorts of other unique, good times on Whistler.com. 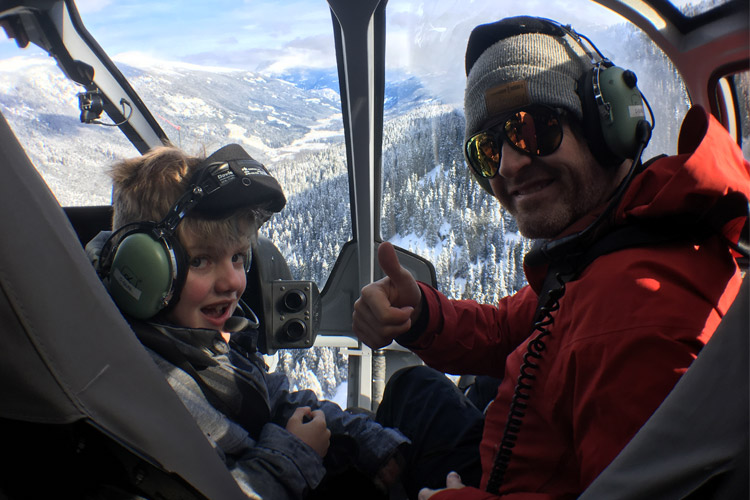 This post brought to you by the Dream Team. PHOTO COURTESY FEET BANKS