There’s an old saying that everyone has a mountain to climb. Sometimes it’s a literal mountain.

Whistler is known for a lot of things, from its amazing scenery to its incredible recreation opportunities, but we’re also gaining a reputation for hosting some of the most challenging events in the world.

For example, Subaru IRONMAN Canada® is considered the hardest out of 40 different courses spanning the globe. The same thing has been said about the Whistler stop of the 39-event Tough Mudder series. We have the Red Bull 400, one the steepest 400-metre races in the world. Even the 10K event at The North Face Whistler Half Marathon includes some winding sections and a couple hundred metres of elevation gain.

But while Whistler likes to challenge people, what really makes us such a great event host is everything that happens after – post-race parties, spas and hot tubs, lakes and patios, great food, cold beverages, and some incredible mountains that look even better after you spend an agonizing few hours crashing around in them.

If you’re looking to challenge yourself in 2017 and to set the kind of fitness goals that motivate you to train year around, there’s a full calendar waiting for you.

The Lowdown: One of the longest giant slalom races in the world with a vertical drop of 1,440 meters (almost six times more than a World Cup) and 180 gates on a 5K course. You can race in teams of four, each team requires at least one female member.

Fun Fact: This is the 33rd year for the race. Participants range from newbies in costumes to former World Cup racers still rocking their vintage bodysuits. 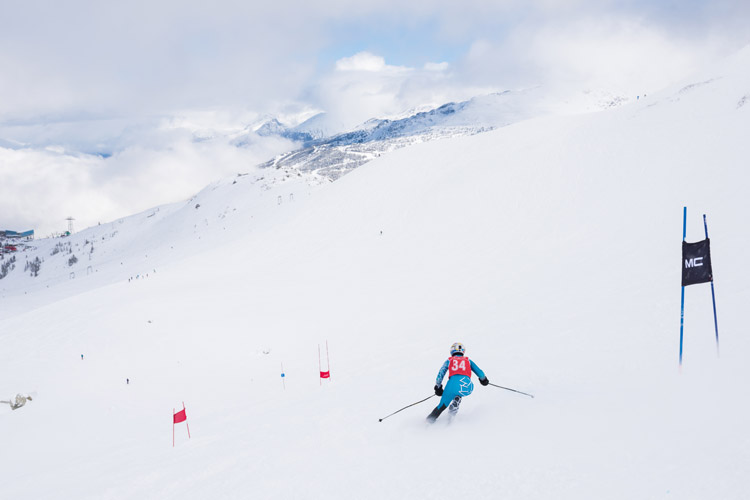 The Lowdown: The Sigge’s P’ayakentsut, or Payak, cross country ski loppet includes 50K, 30K, and 15K courses, plus a 10K sit-ski event for para-athletes, and a 5K kids race. The full 50K is a beast that can take skiers over four and a half hours to finish. This year the organizers took out the brutal climb out of the Olympic stadium but there’s still plenty of challenge left for nordic fans.

Fun Facts: The Payak is a qualifier for the famous American Birkebeiner (“Birkie”) race in Wisconsin. The name P’ayakentsut comes from the Squamish Nation phrase for a place to train oneself physically. 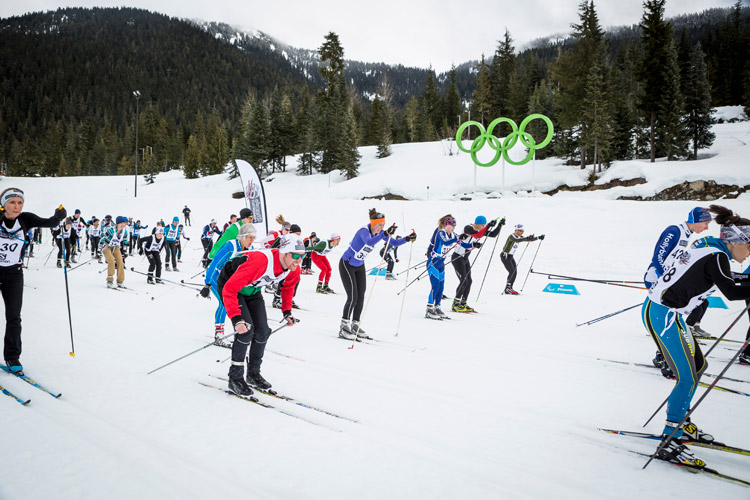 The Lowdown: The theme for the Showcase Showdown changes every year – one year it could be a quarterpipe, the next a big hitter variation of halfpipe. It’s always something fun and unusual, as much a celebration of local snowboard culture as it is a competition. Even if you don’t ride at the level to compete, it’s always fun to spectate.

This year’s format has just been announced as a King of the Mountain style event with five levels or features, inspired by Cool Boarders 2 the Playstation game. You’ll have to complete the Snake Run, Euro Carve, Jump, Rails and Quarterpipe levels to win. 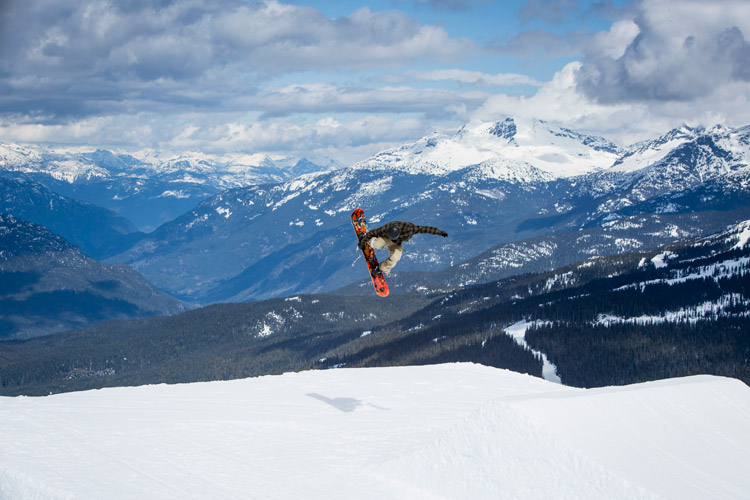 Could you be King of the Mountain? JUSTA JESKOVA PHOTO

The Lowdown: For 10 days every spring, Whistler winds down the ski season in style with live music, arts, and culture events aplenty and some friendly-ish competition. On the athletic side, there’s a Roller Derby contest on April 8 – The Scar Wars Invitational featuring four teams from the region. There’s also a Halfpipe Fam Jam on Blackcomb (time and date TBA). Other events should be announced soon.

Fun Fact: Most of the festival’s cultural events like the 72HR Filmmaker Showdown and Pro Photographer Showdown sell out every year, so buy early. 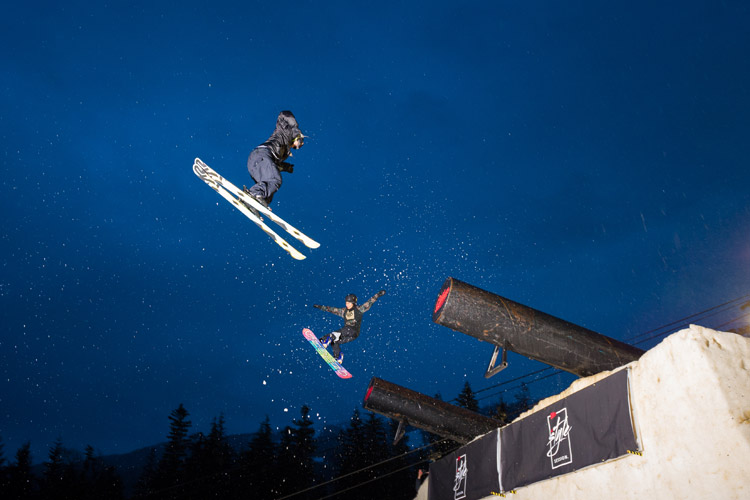 The Lowdown: The schedule for this year’s festival hasn’t been announced yet, but it’s always a packed weekend of events and drop-in activities around the resort. There’s paddleboarding, sailing, skateboarding, ping-pong, trail running, road biking – you name it.

The biggest athletic challenge is the annual Whistler Valley Trail Run, which takes place on the winding gravel doubletrack trails in Lost Lake Park. There are 5K and 10K distances, and a short Teddy Bear Trot for kids 6 and under.

As well, road riders should check out the Bici Gusti gourmet road ride, which includes a 70K ride, is limited to 70 people, and has 70 gourmet foods and beverages to sample along the way and at the post-race celebration.

Fun Facts: There were over 75 events taking place during the 2016 Victoria Day long weekend. The third Monday of May is always a holiday in Canada, recognizing the birthday of Queen Victoria – the reigning British monarch during Canada’s confederation in 1867. Speaking of which, 2017 is the 150th anniversary of Canada’s Confederation. 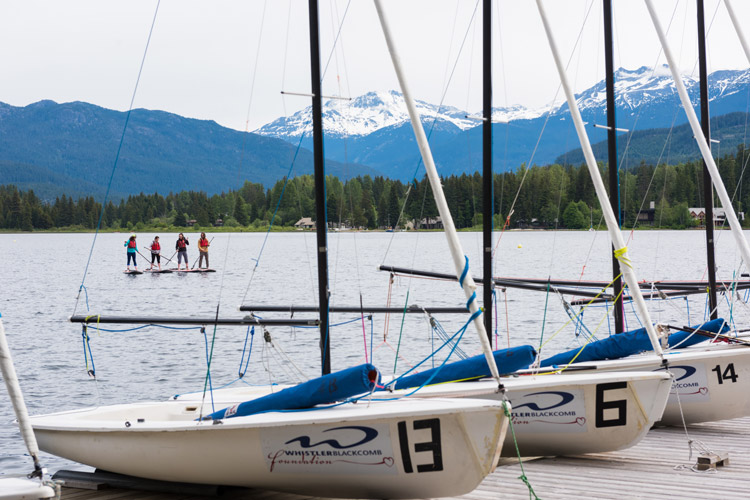 The North Face Whistler Half Marathon

The Lowdown: This event keeps growing. This year there are six different challenges, including a new 30K distance. There’s also a 21.1K half marathon, a 10K, a 5K, a 1K kids run, and a recovery run.

Fun Fact: The event is a fundraiser for Crohn’s and Colitis Canada. 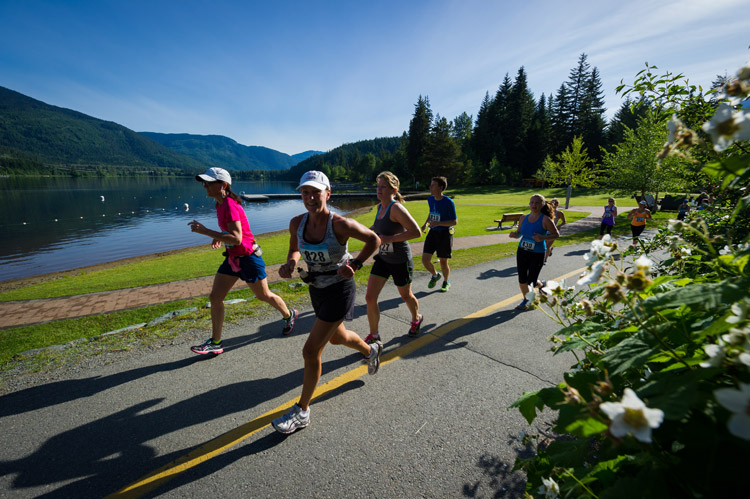 The Lowdown: This roughly 24K trail run takes place on one off Whistler’s longest mountain bike trails, with an elevation gain of over 800 metres from start to finish. Incredible views, beautiful forests and a very technical, rocky descent make this a must-do for off-road runners.

Fun Fact: The Comfortably Numb trail is designated as an Epic Ride by the International Mountain Bicycling Association. 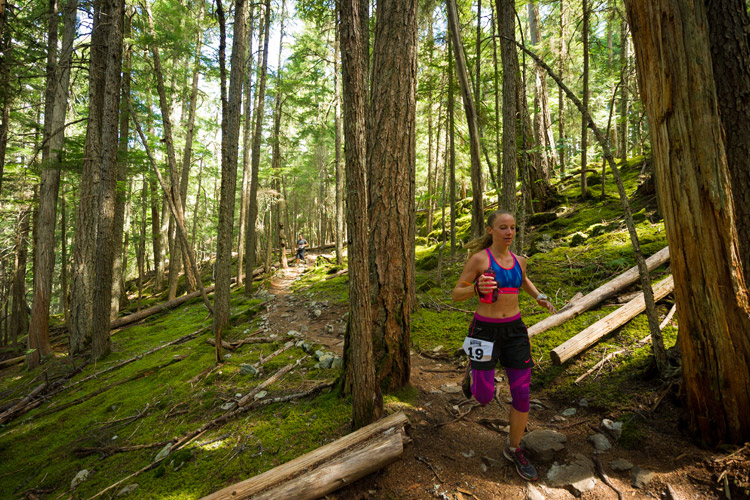 The Lowdown: Organizers have added a new event this year, Canada’s Toughest Mudder – an eight-hour night challenge to accompany the Tough Mudder and Tough Mudder Half races. The courses are long and hilly, the obstacles are physically and mentally challenging, the water is freezing cold, the mud is thick, and teamwork is an absolute necessity to make it to the finish. 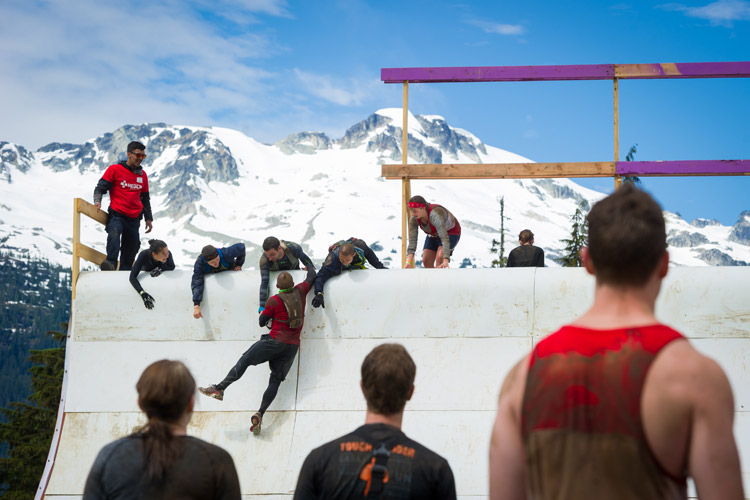 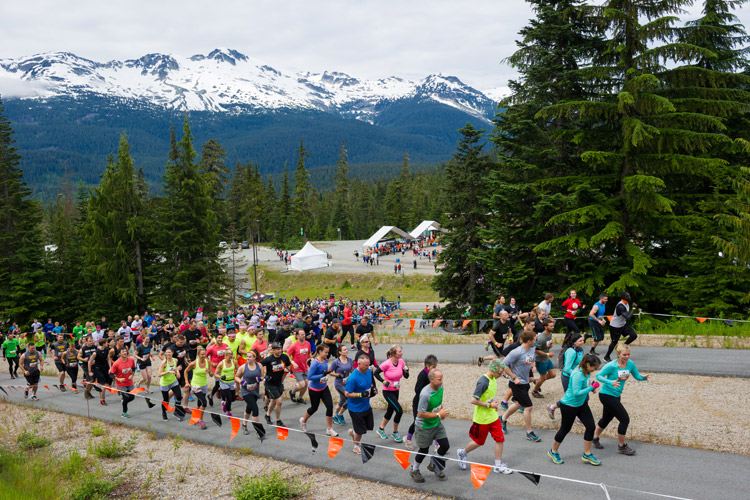 Difficulty Rating: 5.0 Lungs Out Of 5 with Maximum Cramping

The Lowdown: This is the hardest and arguably most beautiful event in the world, with a 2.4-mile/3.8K swim, a 112-mile/180K road bike to the end of the Callaghan Road and back, then out to Pemberton Meadows and back, and a full 26m/42.2K marathon course around Whistler. Insane elevation gains, twists, turns, headwinds and unpredictable mountain weather make this event a beast to be reckoned with. There’s also an 70.3 half distance event, and an Ironkids run (details TBA).

Fun Facts: Subaru IRONMAN Canada® moved to Whistler in 2013 after 30 years in Penticton. Over 1,200 volunteers help run the event and support the racers – and more volunteers are always needed! 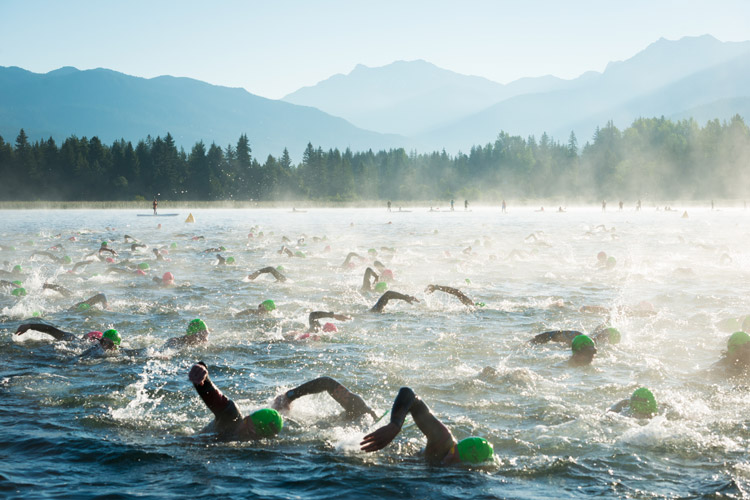 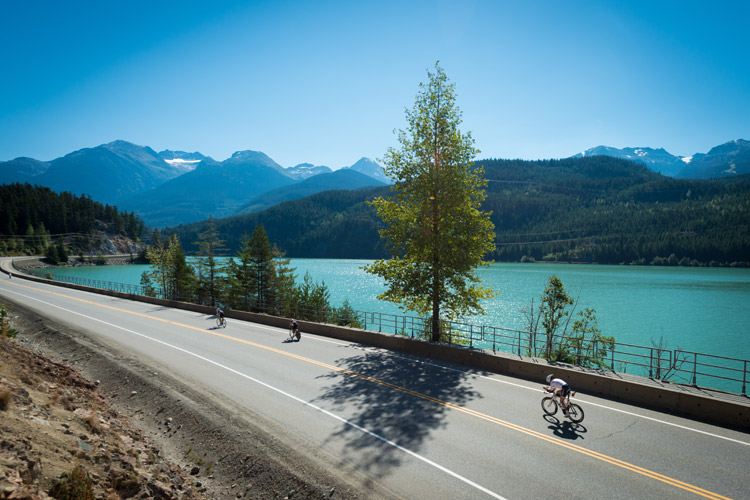 The cycle leg to the Callaghan Valley and Pemberton. MIKE CRANE PHOTO

The Lowdown: This event isn’t remotely competitive, but if you’re into yoga, slacklining, and the spiritual side of health and wellness, this is the place to be with classes, workshops, group sessions, and live music. For many this is a once in a lifetime chance to take a class with world-class instructors or listen to renowned speakers like Seane Corn and Kyle Cease.

Fun Fact: The nightly performances and concerts (and historically, the closing yoga class) at Whistler Olympic Plaza are free for the community and non-festival visitors. You’ll want to catch the contemporary cirque group Quixotic on the Friday night. 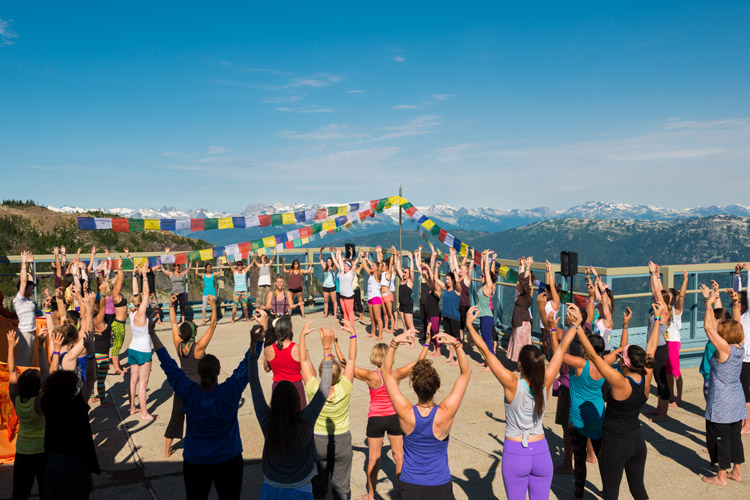 Difficulty Rating: 5.0 Lungs and Both Achilles

The Lowdown: There are uphill battles and then there’s the Red Bull 400. Although the distance is only 400 metres, the vertical gain is also 400 metres for an average 45-degree incline. The start is at the bottom of the Olympic ski jumps in the Callaghan Valley and the finish line on top of the start ramp.

Fun Fact: The Whistler stop of the Red Bull 400 is one of 14 international stops hosted by Red Bull at ski jump facilities around the world. 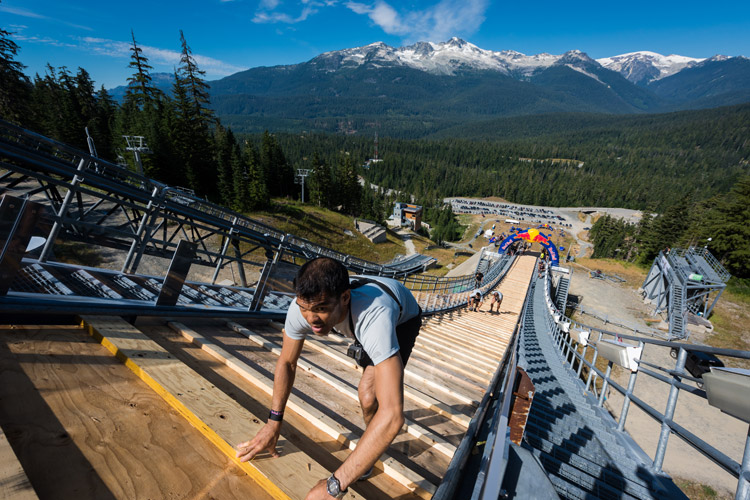 Both hands and feet are necessary to make it up the ski jump at Whistler Olympic Park. MIKE CRANE PHOTO

The Lowdown: Crankworx Whistler is the biggest mountain bike festival in the world, full stop, as well as the most inclusive – while not just anybody can get an invite to an event like the Red Bull Joyride slopestyle competition, the majority of races and events have open registration.

Fun Facts: Whistler was the setting for the first mountain bike slopestyle event, as well as a lot of other unique contests like the Whip-Off World Championship and the massive Ultimate Pump Track Challenge. Brandon Semenuk, the winningest slopestyle competitor in the event’s history grew up riding bikes in Whistler and first competed in the Crankworx Slopestyle at the age of 15. 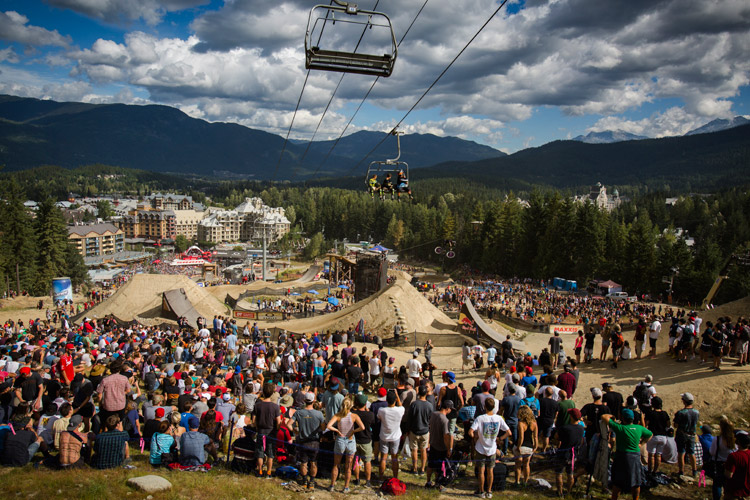 Fun Facts: This event regularly draws over 400 athletes. Even in August, athletes can sometimes hit snow on the course. The Enduro course also features the Decker Loop, a scenic trail that offers amazing views in all directions. 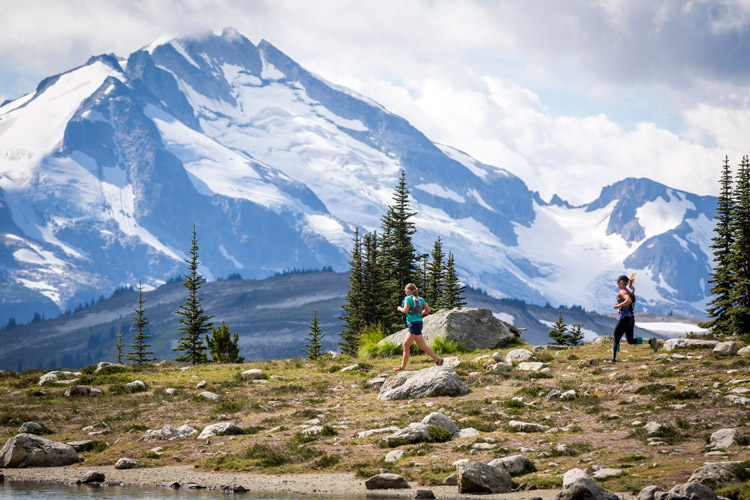 Impressive peaks and glaciers are all a part of the scenery during the 5 Peaks Run. JUSTA JESKOVA PHOTO

The Lowdown: This epic road ride starts in downtown Vancouver and finishes in Whistler after 122K of rolling hills. There is also a shorter event that starts in Squamish, and – new this year – a longer 152K “Forte” event that includes a diversion up and down the road to Cypress Bowl. This ride attracts everyone from top Canadian pros to weekend warriors and can take riders anywhere from just over three hours to more than seven hours.

Fun Facts: The elevation gain from start to finish is over 1,700 metres with a lot of long, challenging climbs along the way. “Gran Fondo” is Italian for “Big Ride”.

Spectating is it’s own sport at the RBC GranFondo. MIKE CRANE PHOTO

Difficulty Rating: 5.0 Lungs and All your Lactic Acid

The Lowdown: This 22.5K beast starts at the base of Whistler Mountain and finishes at the Roundhouse lodge after lapping the peak, with 1,852 meters of elevation gain from start to finish. This is not to be taken lightly!

Fun Facts: The steepest part of the race is a 200-metre section of the Bear Paw run. The course also includes the High Note Trail from the Musical Bumps to the peak of Whistler Mountain. 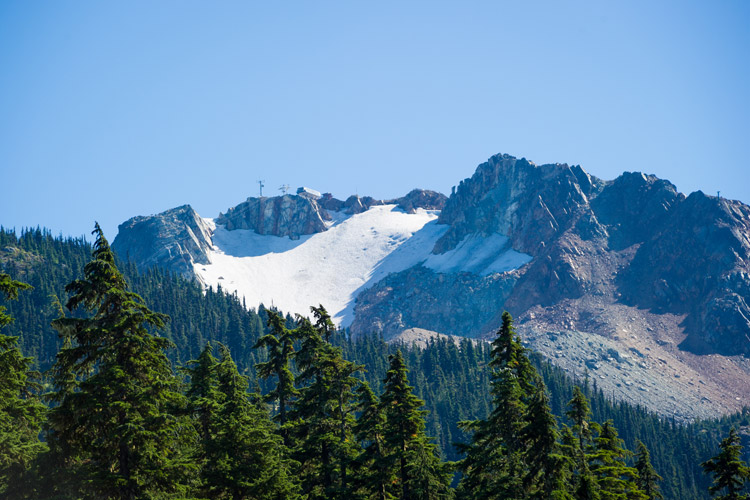 Difficulty Rating: 6.0 Lungs out of 5.0 for the Ultra, and a fun challenge for everyone else.

The Lowdown: That’s 50 miles and not 50 kilometers, but a few dozen ultra athletes each year opt to do the full 80K run solo. You can also race as a relay, with team members alternating between 13K and 7K loops.

Fun Fact: The Whistler 50 is hosted by B.C. Athletics and replaced the Haney to Harrison 100K run and relay. 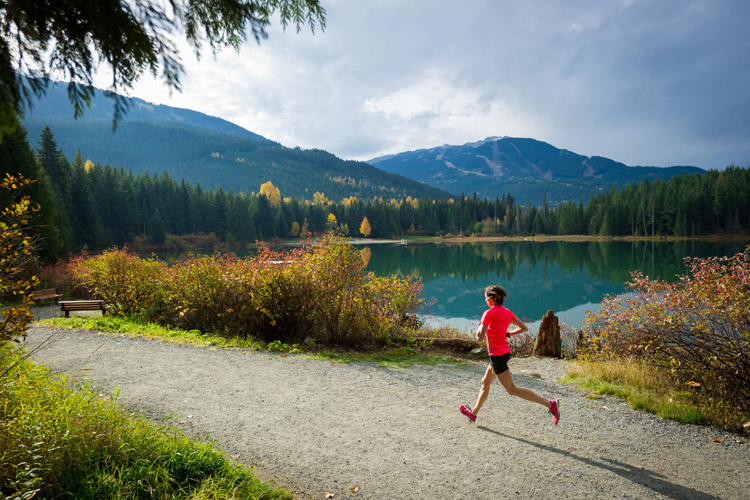 Whistler hosts even more events than this, including a host of smaller running, skiing, boarding and bike events that will be added throughout the year. The best way to keep up to date is keep an eye on this event calendar…or sign up for email news.

It’s going to be a big year, and the time to start training is NOW! Register for your event, sort out your accommodation early and get down to the business of getting fit and achieving that goal. For help with planning your race-cation, get local help from the folks at Whistler.com live work (and race) right here.