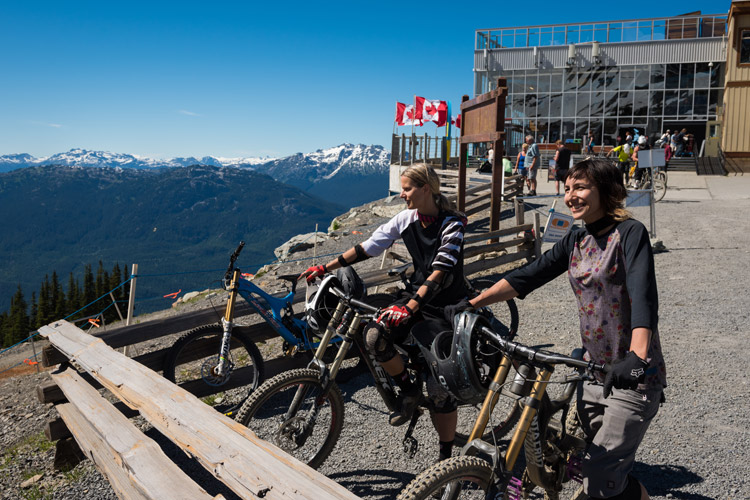 The recent Liv Women’s Only A-Line Session proved that women’s downhill mountain biking in Whistler is not just alive but growing fast. Over 150 riders signed up to ride the famous jump trail in a special closed session the first weekend of Crankworx, with Bike Park coaches standing by to offer tips or tow riders in to new features. I rocked up to the event solo and within minutes found multiple groups of girlfriends to ride with, an amazing feeling and a testament to the time and effort poured into women’s programs in the Whistler Bike Park in recent years. 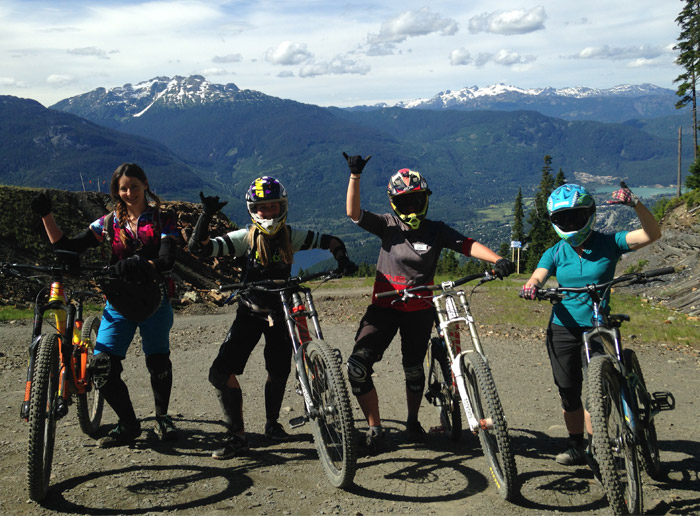 Nothing beats a beautiful summer’s day on the big bikes. TEGAN MCDOUGALL PHOTO

The Liv Women’s Nights have been key to boosting the number of strong ladies on the trails, offering bi-weekly opportunities for riders to meet and learn for a couple of hours with a social-and-swag-giveaway session after. Running Mondays and Wednesdays throughout the summer they offer opportunities for both drop-ins and season long groups to form, making it easy to find riding buddies and progress through features week after week. The new Liv Learn Women’s Ride Days takes that successful format to a full day camp, offering riders like Insider Tegan McDougall the chance to level up without committing to a multi-day camp.

Tegan grabbed a spot on the first Ride Day in July this year. Despite being a Whistler local, she had only dabbled in downhill and was excited to spend a whole day in the park. She caught up with Whistler Bike Park coach and local ripperJo Peters to get her take on the benefits of learning the basics and the difference between Women’s Nights and Liv Learn Women’s Ride Days.

Insider: How long have you been riding and coaching?

Insider: What got you into coaching?

Jo: When I was 3 years old I started horseback riding and got up to a really advanced level with that. I started coaching horseback riding when I was 15 so that’s how I got into the coaching thing. Biking was the next sport I picked up, it was just a natural progression.

Insider: So there’s a correlation between horse riding coaching and bike coaching?

Jo: Totally – coaching is coaching. Once you get good at a sport, the next thing you want to do is help other people get good at it. It’s either that or you be a pro and race. I just realized that trying to go pro wasn’t exactly my passion and that teaching other people is what’s exciting to me. 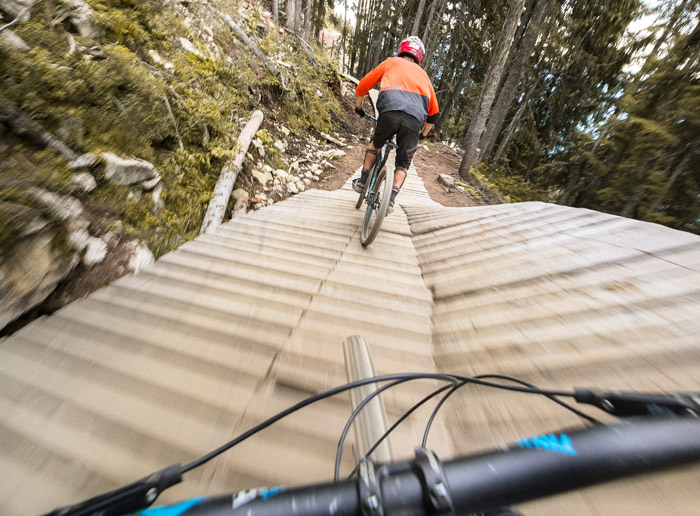 Insider: Most people know how to ride a bike, why is getting a lesson important for people in the park?

Jo: Downhill biking in the park has very little to do with just riding a bike. Just learning to ride will give you the basics to not fall over while you’re pedaling but if you want to be able to go at a smooth speed around a corner, if you want to be able hit any of the features in the park, then learning how to do it safely and successfully can only happen through learning the technique. You can’t just go for it and expect it to be okay. There’s a small percentage of people who might get lucky doing that, but if you don’t learn the technique, it’s just not as fun. And when you learn the technique, then you have the skill to approach everything in the park.

Insider: Women’s nights in the park have been held for a couple of years now. They seem really successful, why do you think that is?

Jo: I think that the fact that it’s super accessible to local women – it gets them into a coaching environment at an affordable price. The timing is good – it’s after work, and just a few hours. It’s not high pressure. It’s just a good opportunity to get out there without having to commit to too much. 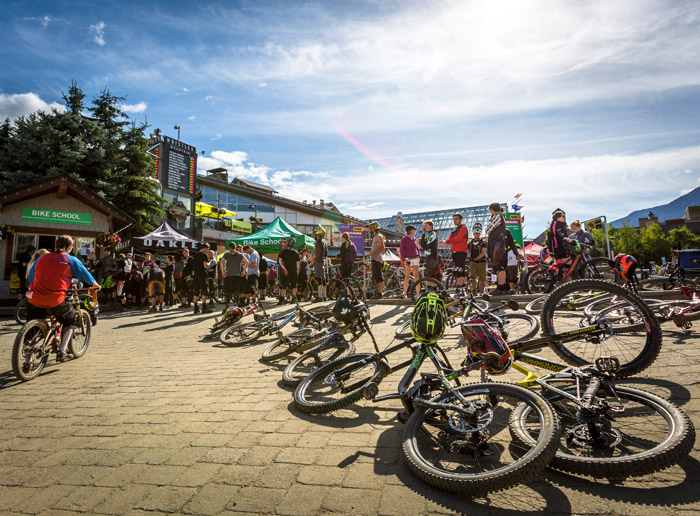 Insider: So why should someone think about doing a day camp rather than just coming along to a few Women’s Nights?

Jo: At around 2 hours of riding the Women’s Nights are not really long enough to address specific skills unless you have a solid group already and you can just get out there and get working on stuff. You only have 2 hours, so that’s a maximum of 3 or 4 laps. On a Women’s Night it also depends on the group you have which can change from evening to evening. Some groups, we’ll just ride top to bottom, other people need things explained to them in detail.

At the Ride Days, we have twice as much time, a smaller group and a variety of coaches at different levels, so you can quickly get into your level and start working on stuff and then progress into another level throughout the day. If you do a trail once or twice and you want to come back to it, then you have the chance to do. In the camp we can stop and session things.

Insider: What do you like most about being a coach?

Jo: Seeing people improve is really cool. And also just getting people stoked to be on a bike. Seeing people experience something maybe for the first time and having fun! Like the “Oh my god I just felt that jump, it was so cool” – that’s the most exciting thing because I’m allowing someone to feel what I’m feeling and what I’m feeling is just like the most fun – all the time. 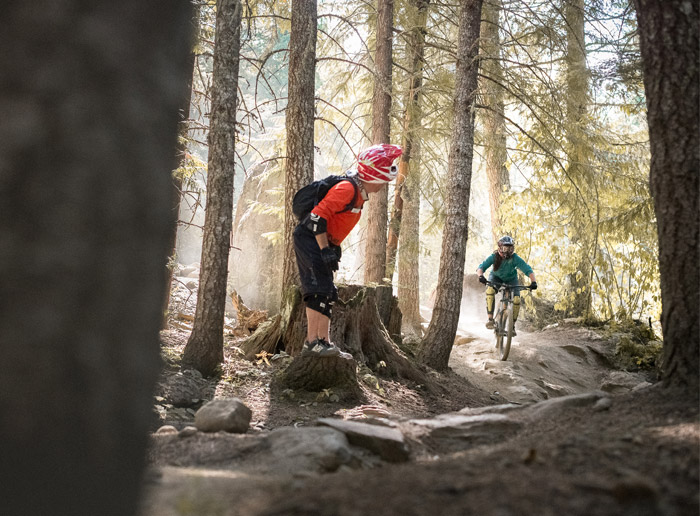 On her Ride Day, Tegan chose to work on cornering, drops and jumps and fun was definitely on the cards. “It was such a great mix of girls,” she enthused. “We were all out there just to have a good time. The whole camp had a very chilled vibe and everyone was so stoked to see each other improve as the day went on.” Spending a day on a downhill-specific rental bike didn’t hurt, either. “I rode a Giant Glory and it just felt like a big comfy sofa compared to my trail bike…I’m definitely in the market for a DH specific bike now!”.

The benefits are ongoing, as Tegan explains. “I feel like I walked away with a lot more awareness that I didn’t have prior to the camp. The coaches pointed out some bad habits (in a nice way!) that I didn’t know I had – I’m now able to identify those habits and try to correct them. I feel like I’m cornering a lot smoother now…but I’m still working on overcoming the fear of the drop!”

Having dipped in and out of Women’s Nights and camps for a couple of years I’ve also noticed differences on and off the bike – including making a ton of life-long biking buddies. Hot off a fantastic morning of A-Line laps with friends from Canada, the UK, Australia, New Zealand, the US and Europe during one of the biggest bike festivals on the calendar, it’s clear that Whistler is a special place to ride. And that’s because everyone – guys, girls, and kids – has the confidence and skills to get out and shred together. So don’t be shy – level up, and let’s meet for a lap!

Insider Tip: A single day camp is easy to fit onto a weekend when there’s so much else to do in Whistler, leaving time to hit up the lakes or go sightseeing another day. It also aligns well with other programs like the DFX Kids Bike Park Lessons meaning Mom can have her day in the park all to herself.

The next Women’s Ride Day is on August 28 and can be booked through Whistler Blackcomb Guest Services at 1.800.766.0449. For more information on all kinds of biking around Whistler plus accommodation, dining and more – hit up Whistler.com. 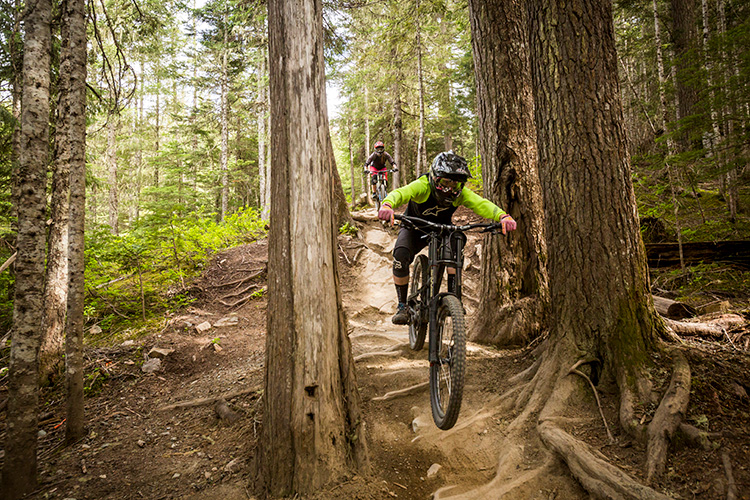 Get the best deals on skiing and boarding this winter season by booking before September 17 (up to 50% off)! Pass holders get priority days, Epic Coverage and flexible dates.