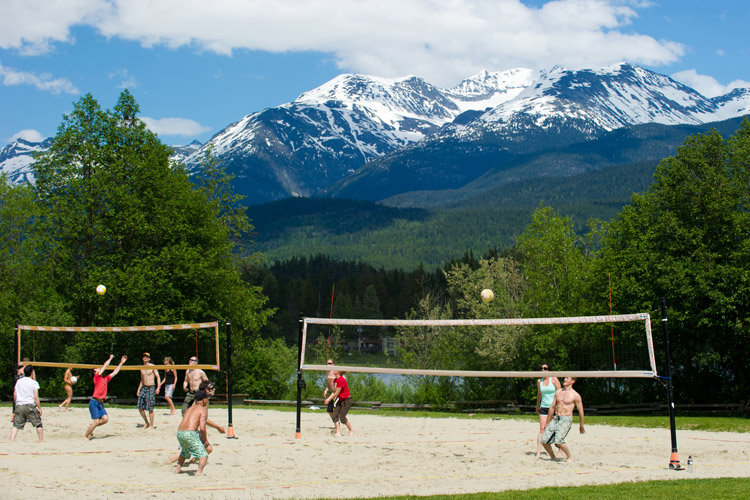 Granted, lying in the sun and doing nothing at all is a perfectly acceptable way to spend an afternoon at the beach but sometimes you feel the need to get moving and socialize. And unless you grew gills over the winter it’s difficult to engage in deep and meaningful conversation while swimming so your best bet for making beach connections is to stay on land and get some balls.

While bocce is traditionally played on a 13 foot wide court this “extreme” version knows no such boundaries. The idea is to just meander around the beach, chucking the “pony” ball as close to objects (or good looking people) as possible and then hefting the clunky, heavy bocce balls at the pony. The sound of a few kilograms of lawn sport thudding towards them will make any sunbather sit up and notice you. The extreme part exists in riding the fine line of not hitting anyone and acting as casual as possible. This sport was “invented” at Rainbow Park on the west side of Alta Lake and that is where it is best played. You can buy a set of bocce balls at Whistler Hardware in the Village.

Regular volleyball has six players per side, beach volleyball only has a couple and they do it barefoot in sand. Go test your side-to-side movement speed in ankle deep sand and you’ll see why beach volleyball players always look like they stepped out of a swimsuit issue.

Rainbow Park has permanent courts set up, as does Alpha Lake Park and you can usually jump into a friendly match pretty much any sunny day of the summer. Happy people having fun and spiking balls at each other’s heads— sounds like summer to me.

The world’s most popular sport will never disappoint. All you need is a patch of fairly level grass and a ball to get the party started. Whistler’s permanent soccer pitch is located at the Myrtle Philip Community School and Meadow Park also has good sized fields for building your World Cup dreams. If you need to stick close to the beach and just want to boot a ball with your buddy Rainbow park is probably your best bet. It gets busy though, so kick with care .

Whistler Hardware also carries croquet sets and while most people are unfamiliar with the rules of the game there is something almost dignified about smacking the balls around with those wooden mallets. When you roll up to the beach and set up the wickets it’s usually quite easy to find willing combatants. Ideally you want a less crowded beach for croquet so the back lawn at Lost Lake Park is perfect.

Frisbee (aka throwing a disc)

While not technically a ball (not even close) Frisbee is probably the most popular beach activity and the big grass spaces of pretty much any beach other than Alta Lake Park offer lots of room to get your throw dialed for a round at the disc golf course or a game of Ultimate. Sportstop, in Whistler Village, sells all kinds of discs (and most kinds of balls.)

Like Frisbee, tossing a football around presents the possibility of glorious,diving catches to impress onlookers. Grass stains are a status symbol, get some.

Tennis on the beach doesn’t really work but tennis balls float and dogs love to fetch them. Both Rainbow Park and Lost Lake have decent dog beaches but the jewel of the canine crown is Alpha Lake Park. The entire place is off-leash with a ton of running space and a dock to leap off. Grab all your old balls and give Fido some wet love (there are proper tennis courts there as well.)

Actual inflatable beach balls, and the little kids who love them, are welcome on any beach but Lakeside Park on Alta Lake is generally considered the family-est beach due to close parking, a concession and a smaller, easier-to-keep-eye-on area. They also rent canoes in case your beach ball floats away into the middle of the lake.

Not really a beach sport at all but Whistler does have designated ball diamond facilities at Meadow Park and Spruce Grove. If you can rustle up 20 friends with gloves then it’s game on.