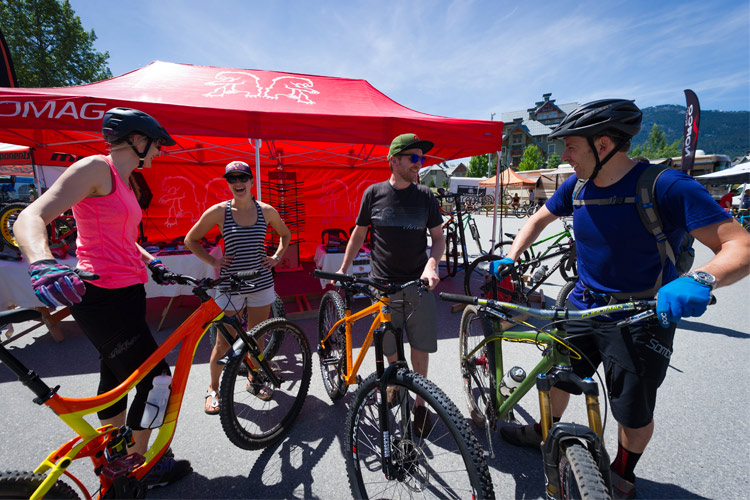 For the past two years, Grant Lamont has been running OuterBike Whistler, a partner event to the famous OuterBike in Moab, Utah. This year he’s taken ownership of the event, changing the name to ThinkBike Whistler (June 1- 4, 2017) and putting a uniquely Whistler twist on the successful demo-and-guided-ride format. Insider Sean McDonald caught up with him over a cold drink to find out more.

Local Status: I live in Whistler, I’ve been here since 1988 and I’ve been into bikes ever since I moved here.

Clips or Flats: I ride both! If I’m going to be climbing a lot I’ll wear the clips. If I’m guiding with beginners or intermediates I like to be on flats so I can get off. 90% of the time I ride clips cos I need every advantage I can get.

Post Ride Beverage: It depends where I am. In Italy, it’s prosecco. But I’m kind of a Blue Buck guy. I’m also a big fan of the new Gibbons Après beer which is really, really tasty and which we’re going to be giving one of after every day at ThinkBike.

GL: I got into the ThinkBike game by working with Western Spirit in Moab Utah, they put on Outerbike in Moab. I ran it as Outerbike Whistler for two years, and this year I took over ownership of the event and control of the planning. I’m quite happy to be in that position and I’m trying to ‘Whistler-fy’ the event even more. 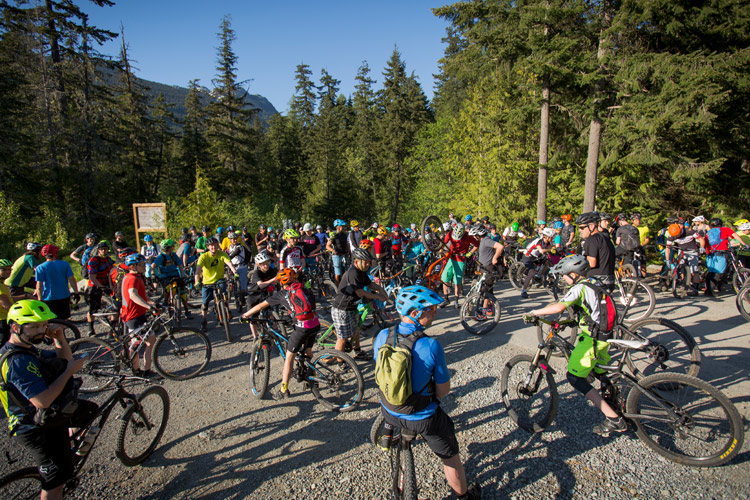 GL: It’s not just demoing bikes and going for rides with great guiding companies in town (like Whistler Bike Guide, Arbutus Routes and Bear Back Biking, who are all doing the guiding for the week this year) but…it’s thinking about WHY we do it.

ThinkBike is more than riding a bike, it’s about getting there, about being a good (trail) steward, it’s about how to link up with people to ride with and building a bike community. – Grant Lamont

GL: We’re strictly doing mountain bike this year. Basically we’re looking at mostly enduro, all mountain and cross country bikes. There’s going to be a good number of downhill bikes there too. But a lot of manufacturers aren’t really making a lot of downhill bikes any more because the 160-150 travel all mountain bike is kind of covering all the bases for people now. What is really nice about it is you’ll be able to take these enduro bikes up into the Bike Park and test them out, and see what they’re all about- there’s no place to run and hide.

We’re going to have probably about 30 kids bikes here this year as well, Commencal is coming up with a whole fleet of kids bikes and we’ve got a couple of other kids bikes manufacturers we’re trying to get up here as well. 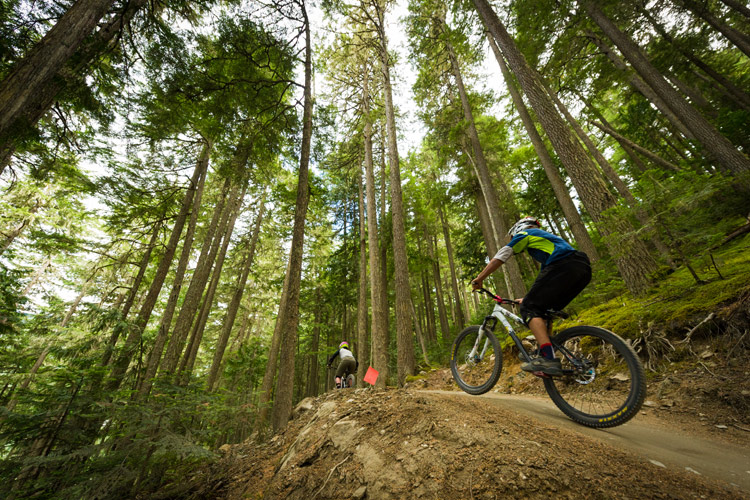 Whistler Bike Park provides opportunities to test all size of bike and wheel on a range of trails.

Must Rides at ThinkBike 2017

GL: I ride a Nomad right now, a Santa Cruz Nomad and it’s pretty tough to knock the king off his throne…but I’m always looking for new bikes.

The new Knolly bikes are something I’m looking forward to trying. I was dealing with those guys this morning and they said they got some new stuff coming out that’s just about to be released – that’s the bike I’m most excited to ride.

There’s another brand coming that’s new to North America… a company called Orbea which is one of the biggest cycling companies in the world. They’ve been putting mountain bikes under Catharine Pendrel for the last four years that she’s been winning world championships and winning gold medals on and they’re making a big push into North America, so we’re going to be seeing a whole bunch of new Orbea bikes let loose. Lots of carbon hardtails with plus sized wheels on them and stuff like that, should be interesting.

We’re also looking at trying the new Cove Hummers. It’s a new design they’ve been working on for a number of years. It’s a sloping top tube, titanium hardtail with plus sized wheels as well, it’s going to be really interesting to see. I think a lot of people are really liking the move back to simplicity. Me not so much, I’m old and beat up and need all the cushioning I can get. 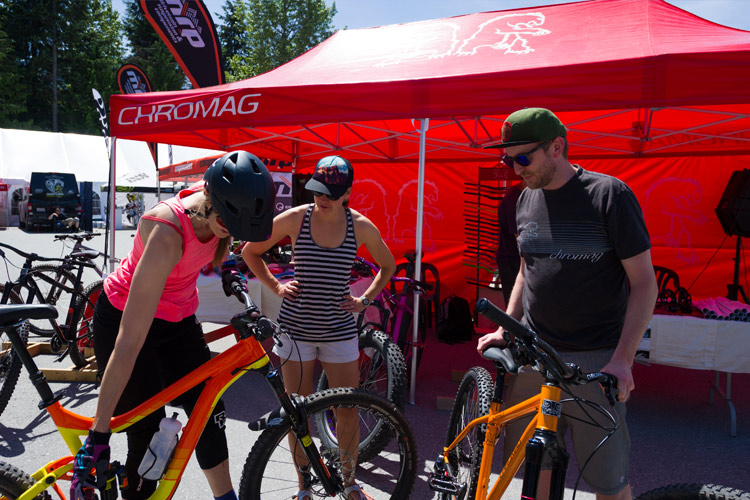 Talking tech is all part of the fun.

GL: We’ve changed the lunch arrangements for the event which is quite considerable. In the past we used to do lunch at the Longhorn and this year we’ve brought in Whistler Cooks as our new sponsor for doing the lunches so all lunches will be served in the tent in lot 2. I work with Whistler Cooks on the BC Bike Race and they feed 700 people a day for 7 days on the road – gourmet meals.

We’ve got vegetarian and meat-eater options each day, so when you enter just say whether you like meat or non-meat and we’ll go from there. It’s going to be really good, we’ve got some pulled pork, we’ve got some jerk chicken coming, we’ve got falafels that are going to be made up and some neat deep fried agadashi tofu wraps.

GL: The first thing I’d like to talk about is ‘Our Dirty History’, this is the main event. We’re bringing up Paul Brodie who’s probably the godfather of framebuilding in Canada, if not North America and he’s been in the mountain bike game since the very beginnings of Rocky Mountain Bicycles as their lead builder since 1984, and then moved out on his own with Brodie Bikes in 1986 and has been going strong ever since. So he’s going to give his talk on the perspective he has on the growth and where he sees it going.

With ‘Talk Dirty to Me’, we’re going to have a little chit chat with our local trailbuilders who are going to tell some of the motivations and reasons and dos and don’ts of building trail in Whistler.

GL: I’ve been in this town a while and been involved with WORCA for decades and I’ve been taking people from all over the world for tours on these trails for 25 years. I have an intense passion for the place, I really love it. I’ve raised my family here.

Unlike other places we ride to our rides [from the demo tents]. We don’t have to do shuttles to test DH bikes, we just put our butts on the chairlifts and ride up. I think our carbon footprint for this event is very, very tight.

Whistler is the best place to test a bike. If your bike can last a season in Whistler, I’ll buy it. – Grant Lamont 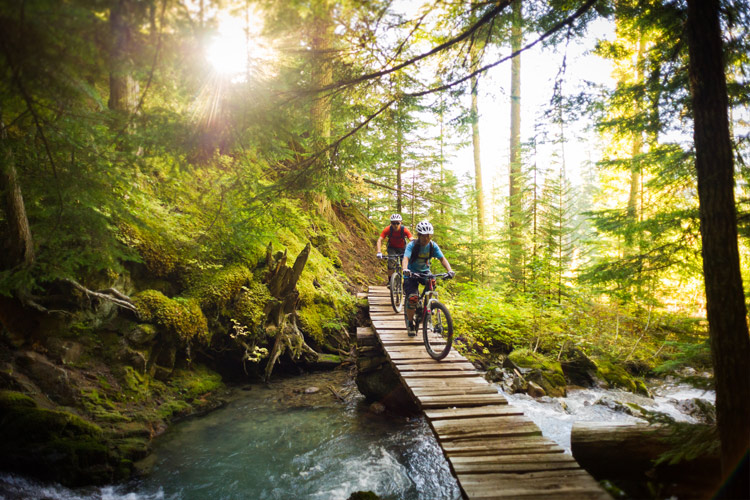 Many of Whistler’s lush trails are a short pedal from Whistler Village, no shuttle required.

GL: In the future we’d really like to turn ThinkBike into more of a symposium, so we’d like to add trails building seminars where people can come up and learn to do trail building and we’d like to do technical demos on suspension tuning, on setting up brakes where the companies can put on clinics for 40-50 people about how to do these types of things. And I’d like to bring more types of cycling to it – if we could have like commuter bikes for people to try, and cruisers, so people can go out and just go to the lake on a bike.

I’ve got a lot of favourite trails. It kind of depends on my flavour of the day. Probably my favourite trail still is ForePlay. I like to ride up it. It provides challenge, it’s got rock face climbing. It’s a masterpiece.

All of my favourite trails are Chris Markle trails. Comfortably Numb, Foreplay, Kill Me Thrill Me, Piece of Cake, A La Mode, Lower Sproatt. The guy was the best trail builder I ever met in my life. They provide a contrast and they don’t suffer fools. And they’re very good with the terrain. 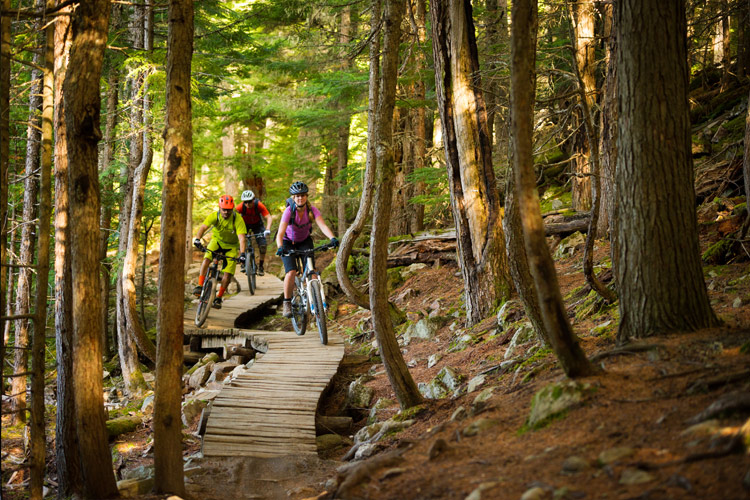 ThinkBike – not just contemplating what you ride, but where, why and who comes along.

ThinkBike Whistler will be popping up June 1 – 4, 2017 with shiny new bike demos, guided rides on Whistler’s incredible trails, a special kids experience with skills camps and even a trail project. Find registration information at the ThinkBike website, and for accommodation over the event Whistler.com has the goods.