Whistler Film Festival & the Best of BC: Behind the Scenes with Feature Film RAW* 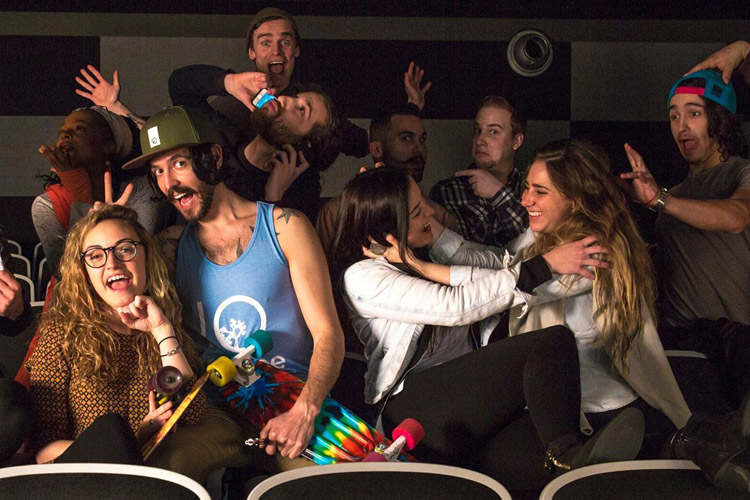 Whistler Film Festival & the Best of BC: Behind the Scenes with Feature Film RAW*

The Coast Mountains of British Columbia nurture creativity as well as an adventurous outdoor mindset and Whistler, BC is home to creatives in all genres – artists, photographers, filmmakers and more. It’s fast becoming a place where you can not only fine tune your powder turns but expand your horizons with live music or art classes or thought-provoking films.

The Whistler Film Festival (November 30 – December 4, 2016) has been a lynchpin of Whistler’s winter cultural scene for 16 years, drawing movie fans, filmmakers and industry professionals together in the mountains. This year the festival is showing 86 films, more than 65% percent of them Canadian-made. One of those films is RAW*, the second ever feature film out of the Vancouver Film School (VFS). Opening with the World Premiere at WFF, the film was shot by students largely on British Columbia’s Salt Spring Island and tells the story of a delinquent teenager sentenced to work on an organic farm to avoid a life of drug addiction.

Eleanor Messeguer caught up with screenwriter and director David l. Strasser to learn more about the ambitious student-driven project, where the inspiration for the film came from, his tips for aspiring filmmakers and why it’s so important to the crew to be featured at the Whistler Film Festival.

EM: How do you feel with this being your first feature and only the second out of VFS in its 30-year history?

David: First off, having the opportunity to write and direct my first feature has been a
tremendous privilege, for which I am very grateful to all of those who supported me
along the way. In retrospect, it is difficult to even comprehend how our team of
completely novice filmmakers managed to pull together and overcome the mountain of
challenges it took to make RAW*, but here we stand, excited to be sharing our World
Premiere at the Whistler Film Festival.

RAW* exists today, in large part, because of the Vancouver Film School. Not because film
school is a pre-requisite of successful filmmaking, but more simply because VFS
brought together a motivated group of like-minded individuals, who happened to coexist
between the same four walls. Our class, Film Production 160, with a thirty-year
legacy consisting of 159 classes before us, had its own tagline, which was “FP160 is
always with you.” This slogan became fuel for a group of thirteen of us who pooled our
resources together and decided to break with the status-quo, which would normally be
to produce a fifteen-minute final project. Instead, we set out to create a ninety-minute
feature film with less than six months from inception to locked picture, including thirteen days
of production with nearly sixty cast and crew living together on Salt Spring Island.

EM: How did RAW* come together?

David: Without trying to reinforce any clichés, RAW* was a story that needed to be told. Not
because we needed to tell a coming-of-age story about a delinquent youth, or a story
about raw milk bootlegging, or even a story about Salt Spring Island’s counter-culture
ideology, but more fundamentally it had to be told as a way to navigate through my own
personal loss and grief. In late 2013 and early 2014 my family suffered the loss of two
loved ones. These losses, each tragic in their own way, were catalysts for me to take a
pause from my day-to-day routine and make the extreme decision to walk away from my
career, my home of 10-years, and to leave the safety net I had been accustomed to
behind.

All this change was in order to pursue a passion for film that I had held close to
my heart for decades, but had never acted upon. My first step on this journey was to
spend a week at the Gulf Island Film and Television School on Galiano Island, where I
had the opportunity to create a short film with a mixed group of adults and teenagers. It
was during this time on Galiano, feeling inspired by the transformative nature of the Gulf
Islands, that I began writing during the late nights. The result of these night sessions
was my first treatment for RAW*’s then unwritten screenplay.

Still from RAW* the Film.

Fast forward to several months later, having transplanted my life from quiet Vancouver
Island to Vancouver’s chaotic Gastown to attend VFS. It was a blustery late September
rainy day, and I was standing outside with a kindred classmate and friend, Arshia
Navabi. Arshia, like myself had suffered the recent loss of a parent, and in a similar
way, he also had a deep seeded need to tell a story. It was during this rainy day that he
asked me if I would be interested in working on a feature film with him post-graduation
and if I had any story ideas. That night, I forwarded him the treatment for RAW*, which
ultimately is a story about a grieving family. The next day he greeted me in the hallway
with overwhelming positivity and said, “we need to make this film together.”

Arshia quickly acted as a gravitational field, attracting the best and brightest of our classmates
to the idea of making RAW* together, not as a post-graduate project, but one that we
could produce while still in film school. We were able to attract our core team within a
few days, which included co-producer, Mert Sari, my collaborating director, Jessica
Randall, our skillful Director of Photography Raivo Kruze and his 2nd unit partner, Luis
Miguel Villareal, our intuitive camera operator, Galen Wilson, our Production Designer,
Adriana Perez, and our task driven 1st AD, Brooke Goble. It
wasn’t long before some of VFS’ senior faculty began to get behind the idea as well.
Our team was then able to launch a successful Indiegogo and private fundraising
campaign. Those funds, combined with generous in-kind support of the community, all
coalesced to help bring RAW* together.

Passion and talent – the RAW* team from the Vancouver Film School.

EM: What was the filming process like? Did you have to navigate any obstacles?

David: I can’t really take credit for the filming process itself. RAW* had two all-star Producers,
Arshia Navabi and Mert Sari, who day-in and day-out moved mountains to help execute
my vision for the story. The list of people, places, business
and organizations that Arshia and Mert were able to get onboard to donate in-kind
services is too long to list, but some of the key support we received was from Peter
Grove at Gulf Island Trust, Max Bygraves at UBCP/ACTRA, The Bond Family,
Rosemary Pulice at the Vancouver Art Gallery, Blake Mcritchie co-owner of the Red
Room Ultra Bar, and Christine Wood at the Salt Spring Island Spa Resort. Many of
these organizations gave us near unconditional support, complimentary locations,
services, and most essentially, encouragement.

It was inspiring to see how the
community, both here in Vancouver and on Salt Spring Island, were willing to rally
behind our film, simply because we were embracing British Columbia’s culture as a key
part of our story, and also that we were telling a story about redemption, which as we
discovered, is a type of story that people are really willing to invest in.

With respect to obstacles, our largest were time and money, consistent with most
independent filmmaking, and especially for first-time filmmakers. Our team had to
collectively find a way to shoot a ninety-page script in thirteen-days with limited financial
resources. In addition to that, we were also constrained by our own underdeveloped
experience and talent. For the vast majority of us, this was our first feature-film, having
maybe only completed 3-4 student short films prior. We were extremely novice, but in a
certain way, I feel that our inexperience helped create a unique aspect to the film, that
for better or for worse, couldn’t be replicated again. It forced us to learn on our toes and
embrace a level of chaos that allowed us to grow as artists and as individuals. With
respect to finances, suffice it to say, we are glad we have supportive families and
friends!

EM: RAW* is screening the World Premiere at the Whistler Film Festival – what are you hoping to get from your WFF experience?

David: Whistler Film Festival presents many opportunities for our team. When we were
studying the festival circuit for RAW*, WFF was always close to our hearts as the perfect
fit for a World Premiere. Whistler really places a strong focus on Canadian-centric
original stories, and has also acted as a successful launch pad for several emerging
Canadian filmmakers. Beyond the festival itself, Whistler has an intimate alumni
infrastructure for its filmmakers, providing ongoing access to resources, mentorship,
and exposure.

Whistler’s proximity to Vancouver is also something that was important to
us, as it allows us to share our film with the local friends, family, and community that
made RAW* possible. Whistler lets us give back to our local supporters, which is also a
theme of [the film]; “The farm gives back, if you let it.”

In addition to screening RAW*,
Whistler also affords us the opportunity to network in an intimate and unique setting with
some of the film industry’s key personnel. The majority of RAW*’s creative team
presently works in the Vancouver film industry as emerging content creators, so the
opportunity to learn, share, and find support for subsequent creative works at the
festival is something we are all looking forward to. In fact, the announcement that RAW
will be World Premiering at WFF has already opened us some new and exciting
relationships. Lastly, we’ve also heard that the parties are epic, so there is that too!

EM: Any tips for people wanting to become filmmakers?

David: I have three tips for people determined to become filmmakers or thinking about
attending film school. Firstly, follow your intuition and be true to your own path. The
cards you’ve been dealt, good or bad, are the raw materials to tell your own stories.
Secondly, approach filmmaking with tenacity and courage, each film you make will be
akin to climbing a mountain in a blizzard with no shoes and no map.

Thirdly, surround
yourself with creative people and value their input. A filmmaker is dependent on the
talent, dedication, and encouragement they receive from their team, both cast and crew.
To share this journey with this wonderful group of
talented and brave individuals was a tremendous honor. In summary, if you are an
aspiring filmmakers or a future film student, I’d encourage you to put your focus on the
people, the relationships, and the creative process, not the final destination or end
result.

RAW* screens at the Whistler Film Festival on Thursday December 1 and Saturday December 3 – tickets are available online. For ideas on where to stay and what to do in Whistler around the festival, visit Whistler.com.