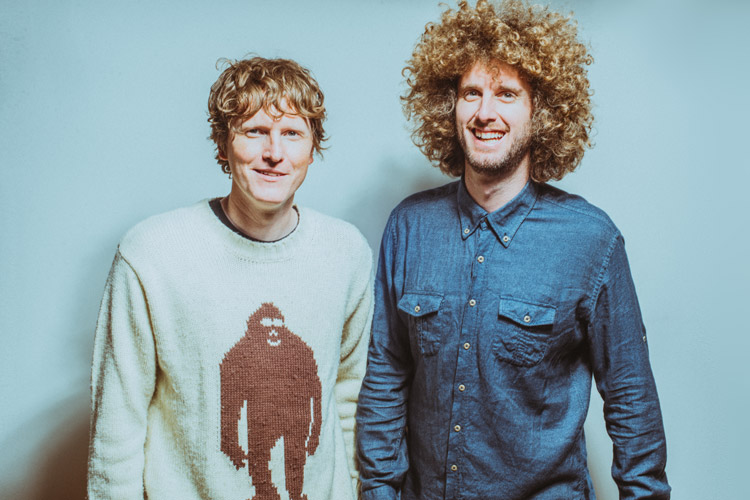 Have you ever dreamed of playing the mainstage at The World Ski & Snowboard Festival? Or any mainstage for that matter? Back in 2008 there was a guy called Dave Rollie with that very same aspiration and this year he will be headlining the Fido Outdoor Concert Series on Friday April 15 as one half of local DJ duo SkiiTour alongside buddy Tim Livingstone.

Dave came to Whistler in 2007 from New Zealand where he was doing event design for Trade Shows. He landed a job at the Hilton as a bellman and was convinced by a co-worker to join the WSSF Operations (Ops) team in 2008 because of his event experience. Dave had also been a DJ back in NZ but because it was too pricey to lug his gear across the globe he hadn’t done any gigs in Whistler yet. With the extra cash he got from working WSSF he invested in turntables and Serato with his brother and then entered the Red Bull 3-style contest later that year. That lead to a weekly DJ gig at Moe Joe’s.

Touch of bad language in this one – but the beats are mighty fine.

Dave continued to work Ops for the Festival for another two years but in the third year while at a staff dinner at Sushi Village with one too many Sake Dumbos involved he was given his first shot on a DJ stage during WSSF by the boss. That same year he met Tim and they started making music and playing gigs together.

The boys didn’t pick up the SkiiTour name until 2013. According to Rollie “Livingstone and Canosis sounded too much like a law firm” as well as being somewhat of an unmemorable mouthful to get any real traction in the DJ world. They added snow machines and toques and the rest is history (Inside Word: it’s a dirty little secret that neither Tim nor Dave ski. They are actually snowboarders).

You can catch SkiiTour snowboarding or playing their music during WSSF along with a gang of other bands and DJs – the official WSSF website has the latest times and artist announcements. Dave is most excited to see A Tribe Called Red who kicks off the Fido MainStage at 7:30 on Friday April 8. Other Dave recommendations are BADBADNOTGOOD on April 10 and Pendulum at The End Party on April 16 at The Whistler Conference Centre.

If you’re not into dance music, you can catch some country earlier the next day with Tim Hicks and opening act Andrew Hyatt, a rising star in Canada’s country scene. You can also hear some rocking country with the Sumner Brothers out of Austin Texas or some full-on rock and roll with Monster Truck both on Saturday April 9. If you’re more into Indie rock then you’ll want to check out Bear Mountain or even Modern Space, a 5-piece band out of Toronto. If you like bands with lots of instruments and horns for days then make sure you hear MarchFourth! which boasts 15 members or Five Alarm Funk’s fun and obviously funky show.

Other soul-inspired music can be found with I M U R (say it ‘I am you are’) or local fave Jenna Mae and The Groove Section. Local girl Willa who started as a jazz vocalist has re-invented herself and added an electro flavour landing her firmly in the pop category along with local cover band Blame the Weekend. Vancouver pop is represented with DiRTY RADiO and of course the big boys of Canadian dance music Chromeo will headline the final Saturday night of the Fido Festival MainStage.

You can also catch many of these bands/DJs and more at the Kokanee Freeride Club Series that runs through the week. Check the WSSF schedule for more bands, DJs and events. And catch Go-Go Dancer, DJ, event manager, ski icon, filmmaker, writer, and all-around perfect person Ace playing at the Silent Disco April 15, 2016 at the GLC