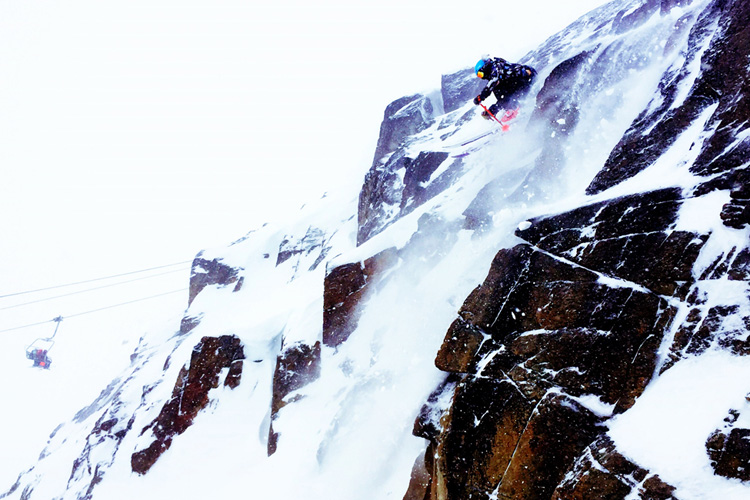 How’s this for living the dream: Olivia McNeil is 15 years old, has been skiing in Whistler since she was six, and is totally allowed to miss school to crank pow turns, rip chutes and drop cliffs with some of the best skiers in the valley.

Such are the benefits of studying hard, skiing harder and being a member of the Whistler Freeride Club. And if you want to see it for yourself, Olivia and 50 or so of her teammates will be skiing in the Whistler’s GoPro Junior Freeski Challenge 2016 on Blackcomb Mountain this March. (Editor’s Update March 21: Congratulations Olivia – first place!).

“I’m feeling good about the competition,” Olivia says. “I can usually choose a good line and I am fine with flying off cliffs and straight-lines but I need to work on my tricks.”

Already into her third year of competition, Olivia is not quite a veteran of her sport, but she’s no rookie either: in her first year of competing (age 12) she qualified for the North American Championships in Utah and came 6th. Last year she won the NORAMs in her category. This weekend her main focus will be keeping her skis on.

Left: Sponsored by Whistler’s PRIOR skis. Middle: Top of the podium! Right: Olivia gets congratulatory hugs from her brother Lachlan and co-competitor Jane. SARAH MCNEIL PHOTOS

“I go all in so my pattern with other comps this year has been either I win, or I really lose,” Olivia says. “I’ve won once, but I also lost 4 skis in 3 comps. I get nervous in the qualifiers and sometimes don’t ski as well as I should, once I’m in the finals I ski better because the hard part is over.”

“Olivia is such a badass but you would never know it,” says WFC head coach Derek Foose. “She is not looking at what anyone else in her age category or gender are doing. Put her on a mountain and she wants to be skiing what the 18-year-old boys are on. She’s a 15-year-old Jen Ashton.”

Ashton, a 3-time world champion freeskier happens to be another of the WFC coaches. “It’s really inspiring to ski with Jen and have her as a coach,” Olivia says. “That she is a successful woman and someone to look up to. We go to the awesomest places on the hill and all the coaches are amazing and have slightly different styles. It’s helpful to hear the same thing from different people. Sometimes how one person explains it just works better for me.”

And it’s working well. Olivia’s skiing is hard not to notice but her attitude shines even brighter. Parents of skiers on competing clubs have remarked about how their own daughters are inspired and excited to compete with her. Earlier this year at a comp at Steven’s Pass, Washingtion, Olivia was honoured with the Spirit Bird Award, an accolade named after late ski legend and IFSA Head Judge and President Jim Norm Jack. The award is usually given to an older, more experienced male competitor.

“I just like all aspects of skiing,” Olivia says, adding that she loves going fast but found ski racing to be a bit too repetitive so freeride suits her personality perfectly. “It’s been a fun season, the snow has been amazing. One of my friends who races gates had to side slip a race course one day when it snowed 40 cm. We definitely don’t do that on a 40 cm day.”

Skiing together every weekend all season long, WFC members enjoy the support and camaraderie of being on a team but still have the freedom to be as creative as they like on skis. For Olivia it’s a perfect mix.

“You ski alone in a competition but the whole rest of the team is freezing our butts off at the bottom, cheering each other on. We all love the sport, we travel together and go for team dinners and I look up to a lot of the older people in the club. It’s cool to be friends and learn from them, you can see you are following in their tracks and it teaches you that you’re not always gonna land perfect, or make it. But at the bottom that community teaches you to keep positive and be there for everyone else because they are there for you.”

Those integral lessons of team sports aren’t generally associated with the hotdogging, “extreme” image of freeskiing but Foose says the sport is growing steadily.
“We have 70 kids in the club this year,” he says. “I think a lot of kids were looking fro something fun and challenging but not quite as serious as competitive freestyle or racing. Parents like the structure of a coached program but the kids are getting the stoke for skiing. We are developing passionate skiers more than anything else.”

With this kind of terrain as their playground, it is no wonder kids like Olivia are ruling.

It’s easy to see that passion in Olivia’s skiing, but also in the way she talks about the sport. “If you ski, freeriding is something you will probably end up doing no matter what,” she says. “If you enjoy going up the mountain and having fun and maybe getting a bit scared then guess what, you’re freeriding. And you’ll never get bored of skiing if you’re freeriding. If you get bored it means you are not trying hard enough. There is always a new way to look at the mountain.” 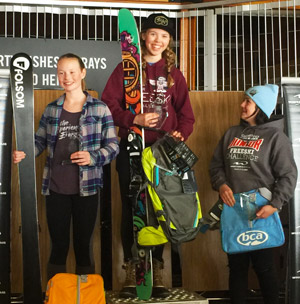 All that hard work paid off – Olivia took top spot at this year’s GoPro Junior Freeski Challenge. Third place was taken by Amanda Constantini, another Whistler Freeride Club skier. Congratulations girls, and high-fives to all the Whistler Freeride Club kids and coaches on the strong results across the board.

The race was held on Blackcomb March 18-20, 2016 with qualifiers on The Bite off Jersey Cream Chair on Friday and Saturday with finals taking place Sunday on the legendary Couloir Extreme.