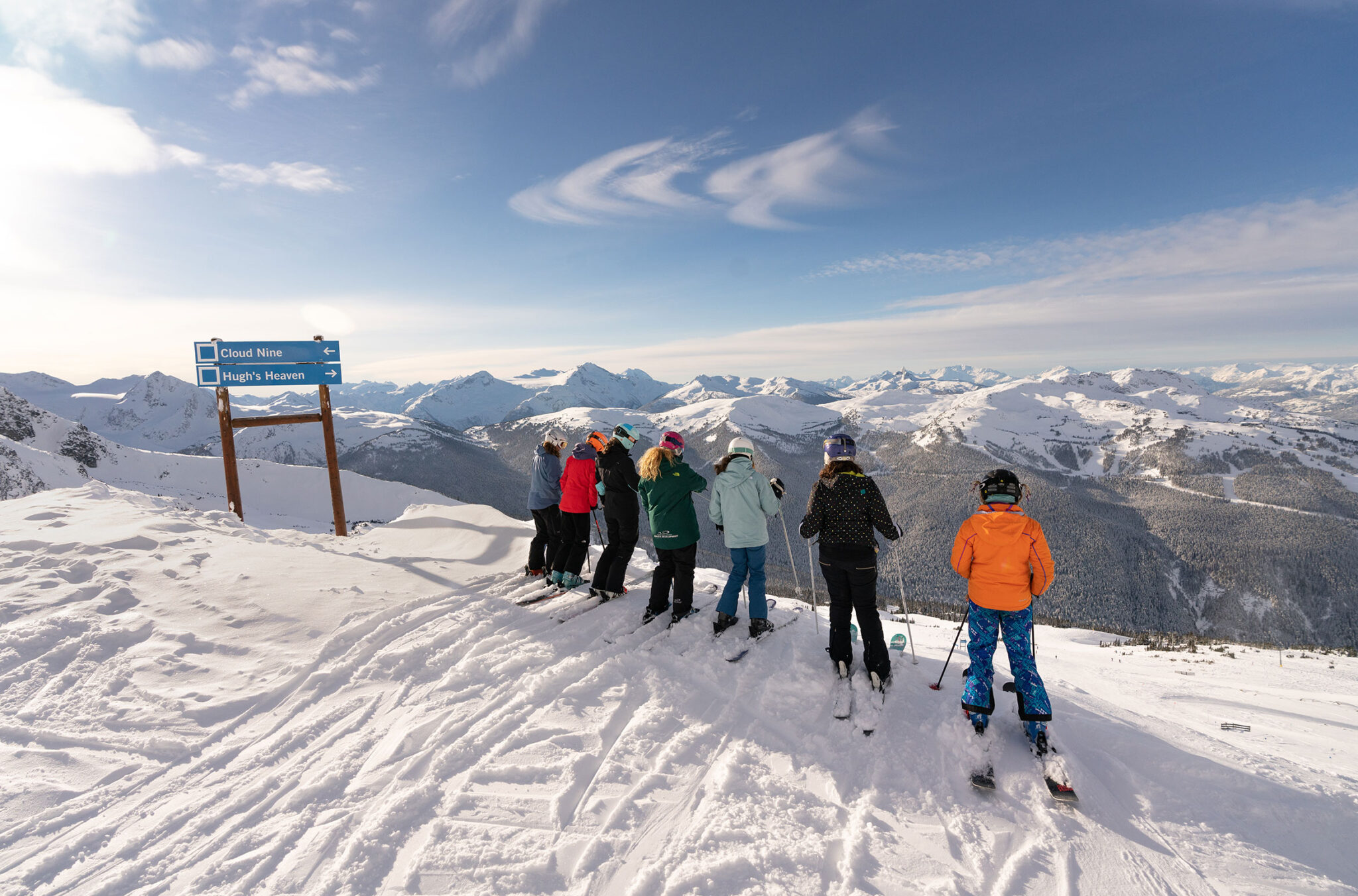 I stare down the steep slope, which I know is riddled with moguls hidden by flat light. I had felt the fear building as we traversed across; at some point, I knew I’d have to turn my skis down the slope and have faith in them and myself. It was the latter of the two that was the issue. I’d spent the morning learning techniques to deal with terrain just like this, but as we came to a stop all of the tips and tricks floated away – this is too steep, there are too many moguls, I can’t see and…

The woman in front of me turned. It wasn’t particularly pretty, but she was brave and she was heading down the slope in an upright position. We’d been skiing together all weekend, and if she could do it, I could do it. I turned my skis down the slope.

It turned out that I’m not the only woman who decided that a weekend of skiing was just what she needed after a busy, festive season. There were over 100 of us checking in at the base of Blackcomb Mountain on Saturday morning for the North Face Women’s 2-Day Ski Camp, which happens on select dates throughout the season at Whistler Blackcomb. Ski abilities range from beginner to expert (levels one to six), but everyone has the same goal of having some fun and improving their skiing.

For the last few years, I’ve had the feeling that my skiing has plateaued. I didn’t have the techniques to go to the next level, so I just found myself doing the same runs and getting into a bit of a rut. Age and the responsibility of kids at home have made me very risk-averse, so I knew the answer would lie in some skills and techniques that would combine knowledge with confidence, and help me get back to a sport that I love. This is what I was hoping ski camp would sort out.

We’d been asked to self-assess our ability, and I had opted for a spicy level four, which was defined in their pre-camp email as “I am parallel on all blue runs and enjoy new terrain such as small bumps and light powder.” I joined a group of women who were just as nervous and excited as I was to get going. We headed up Blackcomb Mountain with a few camp instructors who looked at our skiing style and then split us into smaller groups based on ability and what we wanted to get from the camp.

It’s a good idea to think about what you want to achieve and how far you want to push yourself. I had to put my ego aside, as I knew I’d likely have to go backward to go forwards, go slow and unpick some bad habits.

I knew there were definitely some key, technical things I was doing wrong when I put my planks on and I was determined to get to the root of the problem(s). When the terrain isn’t too steep, the light is good and the run is nicely groomed I feel confident, but just make one of those factors a little harder and I crumble. I wanted to make sure I had the skills to get myself down tough terrain and variable conditions, so I could feel more confident exploring the mountain and even tackle some blacks with something other than pure fear.

These sentiments were echoed by another three women, who became my ski buddies for the weekend. Oddly, we all originally came from the UK, but they were based in Vancouver and had decided to come up for the weekend. Tami Moffatt was our coach and with 23 years of teaching on Whistler Blackcomb, we knew we were in good hands.

As a group, it was decided that we wanted to work up to tackling bumps (moguls). We all emphasized that these bumps should not be too big or too icy; at least not to start with. This request didn’t phase Tami as she dug into over two decades worth of ski terrain knowledge to come up with a plan. In my opinion, this is one of the biggest benefits of camp. I have spent 15 years on these mountains (mostly on a snowboard), but having someone who knows exactly where to go for what you need to do, in the snow conditions you have that day is invaluable.

We started on some easy blues, going slowly in a power snowplow position to make sure we were getting our weight firmly onto the downhill ski. You’d think this would be an obvious thing to do, but I was applying the transfer too slowly, which was making me feel out of control on steeper terrain. Going back to this basic pillar was humbling and gratifying; I could definitely feel the difference. We also did a drill for braquage turns, which are useful in icy terrain as it’s a controlled side slip that helps with balance, and Tami mentioned we could reach for this technique whenever we felt out of our depth.

I would say one of the main goals of the braquage turns are to turn the legs while keeping the hips down the hill. That is the skill you are trying to develop when preparing for moguls and steep terrain. They can also be used as a safety measure on icy terrain as they are a controlled side slips and definitely something you can reach for. – Tami Moffat

Each of us had our own technique tweaks to think about as we cruised the mountain enjoying the spring-like sun (unusual for January) and the seemingly bottomless patience of our coach.

In the afternoon, we began to shift our newly learned techniques onto some small and soft bumps. Tami explained that turning on the top of the bump is easiest, as your ski tips are already off the ground ready to be guided around. Timing is key, but with the new tips also vying for the top spot in my mind things looked a little messy. Tami reminded us all that a lot of these techniques would need a lot of practice to cement them into our muscle memory and that she still works on hers.

At the end of the day, we looked at videos Tami had taken of each of us and she gave us some things to think about as we headed off. Two of my new buddies had beers at the Dubh Linn Gate in mind, another a fondue dinner at Basalt, but I was headed home!

We shifted to Whistler Mountain for day two of camp, and as we rode the gondola Tami explained that she’d thought about what we all needed to work on and had some specific drills in mind. One of them was called the javelin turn, which brought up visuals that made me nervous. However, it turned out to be a weird-looking, yet invaluable, exercise that certainly requires you to shift your weight onto the right ski and get your hip in the correct place.

This is not Tami, but it gives you the general gist of a javelin turn. Which is great for balance, body separation, and hip placement.

If you are skiing Whistler Blackcomb, some of the best slopes to practice javelin turns would be groomed green runs moving up to groomed blue runs. Like, Easy Out (green), Wishbone (blue) and Jersey Cream (blue) on Blackcomb Mountain, and Ego Bowl (green), Green Acres (green) and Whiskey Jack (blue) on Whistler Mountain.

Tami felt we’d gained enough skills to tackle some of the easier black runs sporting some gentle bumps over in the Harmony Bowl area. Even armed with all of Tami’s tips and drills, I still felt nervous traversing out onto what I considered a steep and daunting slope, but this is where the power of the camp comes into play. As I watched another one of my ski buddies complete her first turn I knew I had the skills to do it too. We were at the same level; if she could brave it then so could I.

However, this bravado left me on one of our last black runs of the day. I was frozen in place. Tami told me to follow in her tracks. Her calmness and faith in my ability gave me what I needed to get out of my head and onto the slope. And guess what, it was all about putting my weight on my downhill ski – the very first skill we’d worked on and one I will be working on for many years to come.

Doing this camp certainly got me out of my ski rut and has given me new things to work on at the same time as giving me the confidence I needed to apply them. Would I suggest these camps? Absolutely. Would I do another one? Sign me up. Did my kids survive my time off? I’m a better mom for it.

Good to Know’s for Ski Camp

Camps start in December this year and through to April 2023.

If you prefer a board to planks, then there are the Showcase Snowboard Camps, which happen on the same dates. 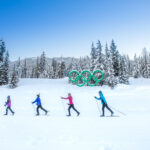 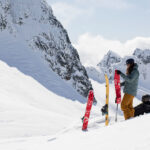