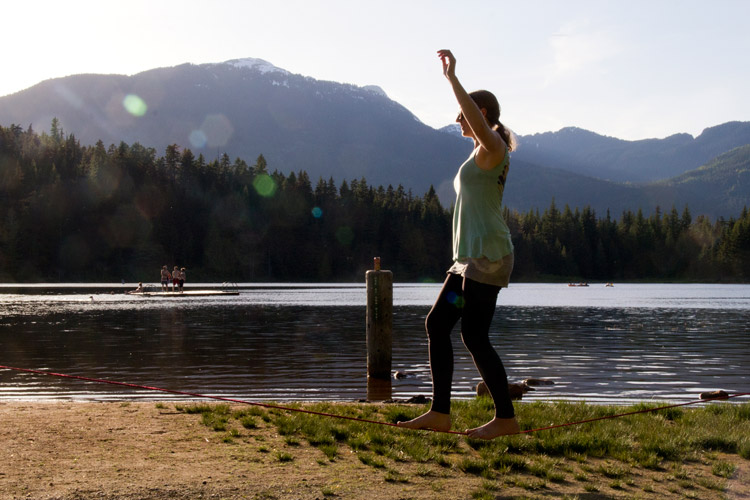 Slacklining in Whistler: Growing with Respect

Showing up with a slackline at a park is like showing up with a puppy – you will attract people. They’ll likely have all kinds of questions but that comes up most is – “Can I have a go?”

So what is the draw? For one thing, slacklining looks deceptively simple – just hop up, walk in a straight line and don’t fall off. But once you realize it’s not that easy you want to do it again and again until you’ve bested that taut webbed piece of nylon. It’s a single-focus, almost meditative activity that can also be fun and social. 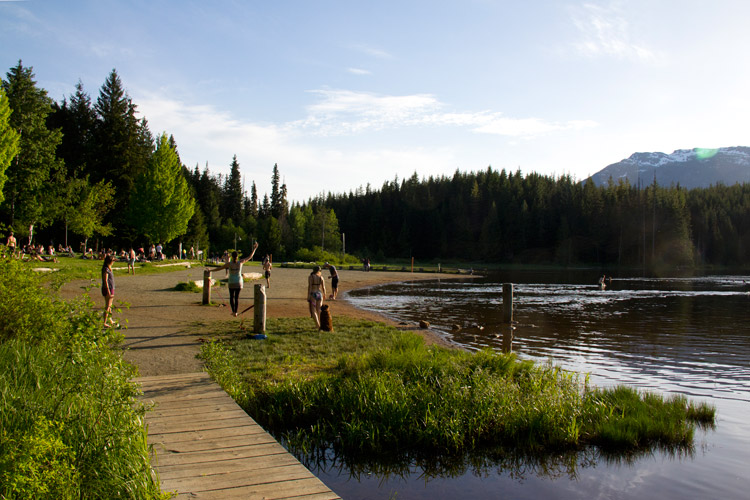 Slacklining has risen in popularity over the years, no doubt because of those aspects but also thanks to the media attention given to highlining (slacklining at height). If you follow outdoor sports news at all you’ve likely seen the stomach-dropping images of the late Dean Potter in Yosemite National Park or even Spencer Seabrooke free soloing (highlining without a tether) between peaks of the Stawamus Chief – a record-breaking feat. Slacklining is said to have come out of Yosemite in the 80’s so it’s no coincidence Potter’s envelope pushing acts were influential in its growth.

What was once only thought of as a way to condition yourself for climbing or pass time when not on the rock (not unlike skateboarding to surfing) is now a sport in its own right. It has even spawned several branches, including; highlining, urbanlining, waterlining, tricklining and slackline yoga. 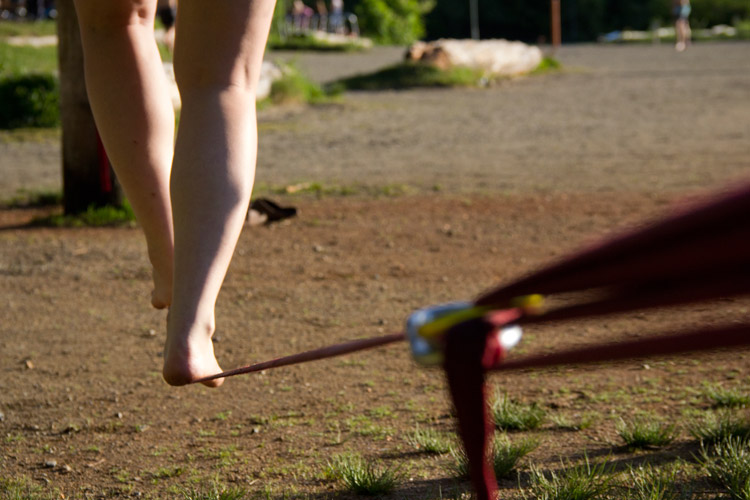 In a time when we’re constantly distracted and overwhelmed perhaps this is just the kind of pared-back activity we need to stay present. As the sport attracts such a refreshingly mixed group of people from different sports and interests, it can also help us break out of our usual social circles (these days artificially enhanced by the echo chamber of social media). On the purely physical side, slacklining helps improve core skills transferable to just about every sport out there with benefits including strengthened intrinsic muscles, improved balance, functional core strength and razor focus. Deceptively simple indeed.

However, from unwittingly disrespecting cultural landmarks to damaging trees, the sport’s rise has not been without its blunders. Slacklining is being banned from cities and parks all over and not without reason. As Mayor of Whistler Nancy Wilhelm-Morden has pointed out in a press release, “Anchoring slacklines to trees crushes their bark, which ultimately kills the trees, and we’ve lost six trees in our parks already”. (This goes for hammocks too by the way.) Replacing the trees costs the Resort Municipality of Whistler (RMOW) a lot of money and costs park users shade and overall enjoyment. 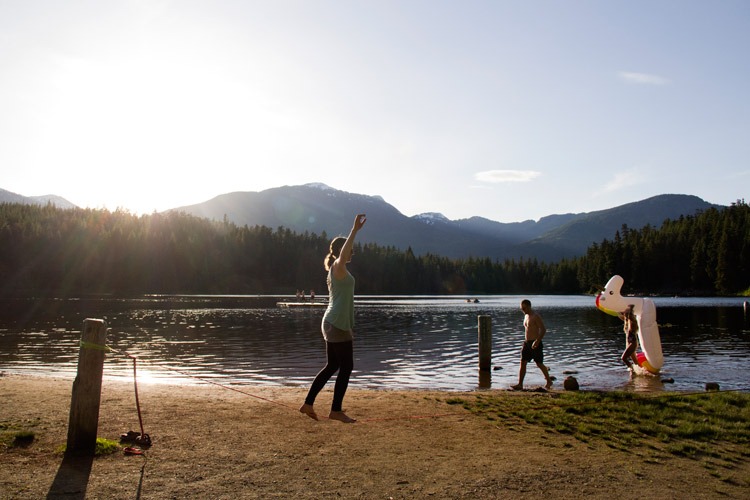 But the sport is learning from its mistakes and our municipality is learning with it. At the end of last summer the RMOW installed dedicated slackline posts in Whistler’s most popular parks. This attitude is one of the best things about Whistler- instead of going with the tide and banning slacklining all together, our municipality has worked out a way to embrace the local lifestyle while protecting the environment. Are all of the slackline post locations perfect? Probably not to everyone, but they’ve done their best to offer a variety, breakdown below.

At the end of the day it’s up to us to respect the nature we play in. So go hit the parks, ratchet up responsibly (on the posts) and maybe meet a new friend or two while you’re out there! 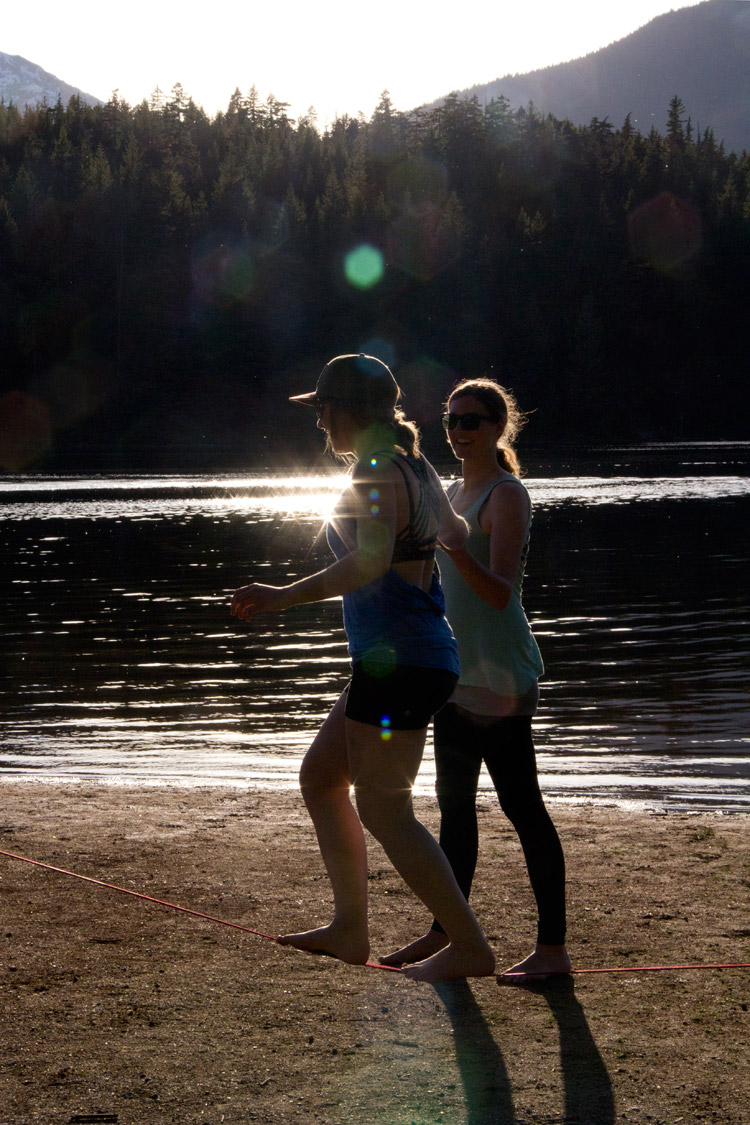 Want to know more about Whistler’s lakes, beaches, parks and more? Head over to Whistler.com. 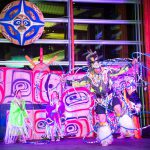 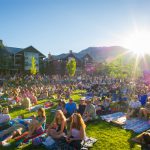