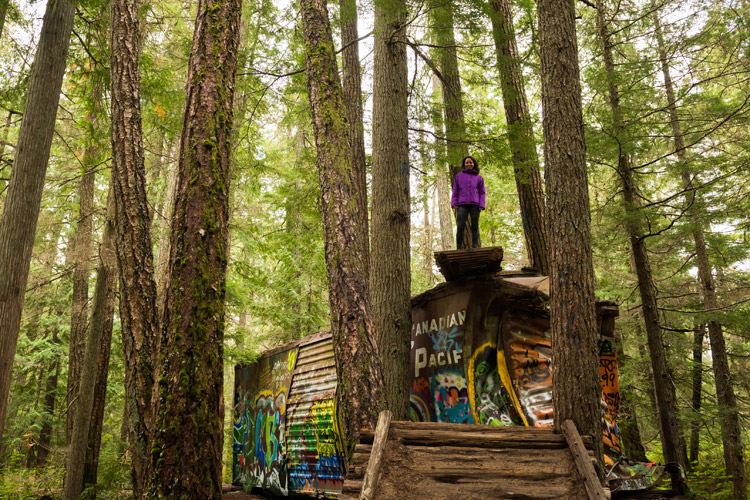 It’s one of Whistler’s most unique spots—a handful of mangled railway boxcars scattered like Yahtzee dice among towering cedar and fir trees lining the mighty Cheakamus River. It’s a free public art gallery, a bike playground, a one-time horror movie setting and hiking destination… And now you don’t have to break the law to get there.

Celebrated for its visual juxtaposition of metal and nature, history and culture, Whistler’s infamous “Train Wreck” used to be off-limits because access to the site involved walking along the railway tracks. The site, long favoured by local graffiti artists, photographers, trail runners, hikers and bikers became a legit tourism destination with the opening of a new bridge spanning the Cheakamus and connecting the wreck to the Sea to Sky Trail and other popular hikes in the Cheakamus Crossing area.

“It’s exciting to now be able to provide a safe way for people to access it,” said Whistler Mayor Nancy Wilhelm-Morden. “Visiting the site and taking in the beautiful views of Cheakamus River is an excellent activity to do this summer.”

The suspension-style footbridge was designed with a sort of locomotive feel and includes a nice length of boardwalk leading hikers back into the mossy coastal rainforest. The bridge is an easy 1 KM hike from the Sea to Sky Trailhead in Cheakamus Crossing/Function Junction zone.

But what about those boxcars? How did they end up there with little or no damage to any of the surrounding trees? According to research from the Whistler Museum, the train derailed in 1956 when a freighter heading south from Lillooet came into on an area under track repair with just a little too much mustard.

“The speed limit was only 15 mph (24 km/h),” writes the Museum’s Sarah Drewery in an old Whistler Question article on the matter. “The fourth engine turned a rail, causing the train wreck. They checked the tape in the engine, which told how fast they were going… 35 mph (56 km).”

The subsequent crash wedged three cars tightly into a narrow canyon-like section known as a rock cut and a local logging company owned by Whistler’s Valleau family was enlisted to remove the cars with their heavy-duty D8 Cats (logging machines). Once pried loose the damaged cars were dragged up the tracks and rolled over into the forest where they remain today. The tracks were repaired, the train kept a’chugging and now 60 years later the trees have grown up pretty nicely, the local artists keep things colourful, and the Whistler Train Wreck is a magical kind of spot you’re unlikely to find anywhere else. But don’t take our word for it, go see for yourselves (and you don’t even have to break the law.)

Whistler Train Wreck Hike: How to Get There

Parking for the trail is located at the Interpretive Forest parking off Cheakamus Lake Road on the east side of Highway 99 – turn left at the Function Junction lights when coming from the Village and the parking is the first left before the bus shelter.

Walk into the Cheakamus neighbourhood via the Valley Trail and turn right onto Jane Lakes Road, following the road as it curves to the signed Sea to Sky Trailhead. The Sea to Sky Trail is a wide gravel multi-use track but once you turn off to the bridge you will encounter some uneven surfaces – decent walking shoes are recommended. The bridge is approximately 1 km from the trailhead with minimal elevation gain, and once you cross the bridge you are right in the middle of the Train Wreck site.

View Train Wreck Hike Map thanks to the Resort Municipality of Whistler.

The walk out to the site via the Sea to Sky Trail takes less than half an hour at a reasonable pace but we highly recommended leaving plenty of time to explore the entire site and enjoy the forest. Bring a camera to capture some of the scenery along the Cheakamus River and the cool local artwork on the railway cars themselves.

There’s a network of hiking and biking trails in the area to explore, but if you want to make a loop Trash Trail is a fun way to return to Jane Lakes Road. Take the singletrack on your left as you return to the Cheakamus side of the bridge and follow the trail along the river past rushing rapids, gorgeous moss covered rocks and waterfalls (watch for whitewater kayakers here!). It’s a more technical route with some sharp ups and downs and exposure to the river so recommended for those with a decent fitness level and a sense of adventure.

Get any good photos? Tag them #OnlyInWhistler so everyone can check them out. Be sure to check out our other hiking blogs for more ideas on where to walk this summer and for more interesting ideas for fun hit up Whistler.com. 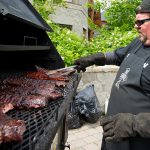 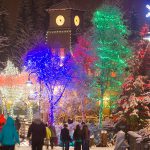 Walking in a Winter Wonderland: Take a Tour of Whistler’s Festive Lights

Know Before You Go: Skiing and Snowboarding at Whistler Blackcomb