A stand of towering cedar and fir trees set beside a rushing alpine stream is not really where one would expect to find Canada’s second largest skateboard park, but after the recent completion of Phase 3 the Whistler Skate Park is officially bigger and better than ever, without losing its unique natural setting.

“It really is something to be proud of,” Whistler Mayor Nancy Whilhelm-Morden told The Insider after a red-ribbon cutting ceremony to officially open the latest park expansion last week. “Whistler now has over 50,000 square feet of finished surface. It makes me wish I was a skateboarder.”

Built in 1991, Whistler’s original snake run/bowl focused on speed and flow and was perfect for Whistler’s growing community of snowboarders who came to carve Whistler’s legendary powder. Whistler’s first public skate facility, the snake run/bowl is now considered among the best in the world.

LEFT: Skaters celebrate (you have to love a mayor who throws “the horns” for press photos). RIGHT: Why cut a ribbon when you can ollie it?

By the late 1990s, snowboarding had brought scores of new skaters to town and local kids who grew up with the original bowl were ready to expand their skills and styles. Phase 2 of the skate park was a community-driven initiative that saw the municipality working directly with skaters including Tosh Osaka, Isabelle Ranger, Rick McCrank and Jim Barnum, who took a leadership role on designing, and ultimately constructing the new “high flow street/ transition” Phase 2 of the park.

Update: The Sk8 Cave closed permanently as of November 2017.

The Sk8 Cave is Whistler’s only 100% dedicated skateboard shop (and they have an indoor mini ramp!) so we asked owner Chris Charlebois what he likes the most about riding the new 3-phase Whistler Skate Park:

1. It’s brought a lot of people together, new and experienced. The energy is great.

2. The new features are so smooth and flawless. We can use less energy pumping and are able to carry speed and momentum.

3. The park has great flow. The transition and lines into the existing park and bowl open up many more options and the ability to use all three phases together.

Phase 3, however, was a long time coming. While a collection of wooden ramps and structures was built, they were never meant to be permanent and some had even begun deteriorating after years of mountain weather. In 2014 local skater Mike Klinkhamer decided to organize a fundraiser and light the flames of passion under Whistler’s skate community in hopes of completing the park.

“I had a lot of help with the fundraiser,” Klinkhamer says, “but I wanted to show we were passionate. The muni was stoked when over 50 skaters showed up to the first meeting.”

“Klinkhamer was a big part of getting it all back to life,” explains Lenny Rubenovitch, president of the Whistler Skateboard Association, a grassroots group formed in 2006 to communicate on behalf of local skateboarders. “It wasn’t about raising money as much as it was about raising awareness and sharing with the municipality. We had questions, they had questions and we all worked together to do it. There was so much support from so many places.”

As the months of planning grew into years, Rubenovitch says the most important piece of the constructing the new park was patience. “Skaters don’t always have the patience that we should. Our lives are just not like that,” he says. “I have so much respect for the municipality for having the patience and working together with us. Now we have a park for the future and the community.”

“The park is so much fun right now, everything is connected.” agrees Klinkhamer. “More people are skating it, having a good time, and lately I’ve witnessed some of the gnarliest skating I have ever seen in Whistler.”

Funding for the expansion came from the Province of British Columbia and the Whistler Blackcomb Foundation.

With the Whistler Longboard Festival slated for July 1-3, 2016 and the new park officially open this will be a big summer for skating in Whistler. Bring your boards (or buy one at The Sk8 Cave) and get ready to roll! 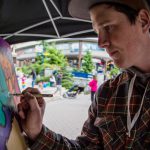 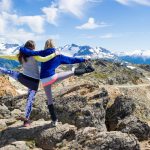 Yoga in the Mountains: Best Places to Practice in Whistler