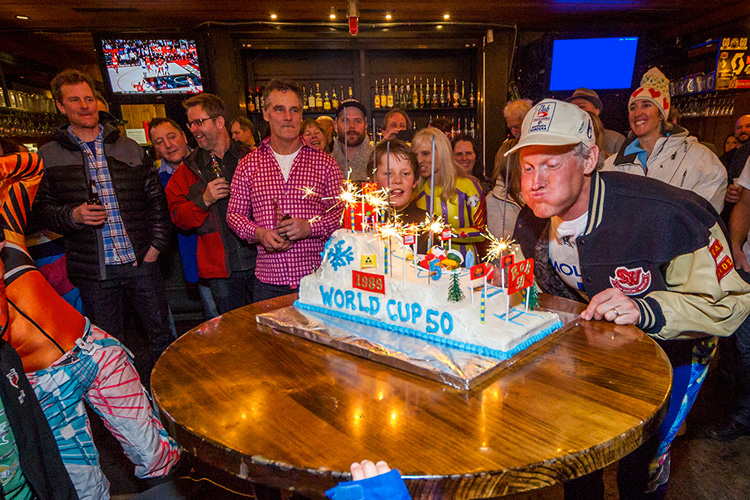 The 2010 Winter Games were a barrel of good times but the single most exciting moment in Whistler’s history took place on February 25, 1989 when local ski racer Rob Boyd soared down the Dave Murray Downhill on Whistler Mountain to claim gold in a World Cup Downhill race, the first man to ever do so on Canadian soil.

Pretty much the whole town was out for the event and Whistler went absolutely bananas, the medals ceremony in then-still-relatively new Whistler Village square was the largest crowd the town had ever hosted and kids I went to elementary school with can still tell you Rob’s winning time down to the 1/100 of the second (it was 2:10:03 in case you are wondering). There are a lot of legends in this town, but Rob is our biggest hero.

The winning run (and a sneak peek into Dusty’s circa 1989.

And he is still here. Now married with two young sons, Rob remains an integral part of Whistler’s ski racing scene as coach of the FIS aged kids (16-19) with the Whistler Mountain Ski Club. Last weekend at Dusty’s the who’s who of old school Whistler gathered to celebrate Rob’s 50th birthday with racing suit dance-offs, a massive downhill course cake and a giant piñata likenesses of the man himself (complete with sturdy chin and classic green racing helmet). The Insider caught up with Rob the next day to reflect on the good old days and why these days are still pretty good as well.

Whistler Insider: How did you end up in Whistler anyhow?

Rob Boyd: I was sixteen and we moved out here in 1982. My dad owned a ski hill in Vernon BC and after it closed he brought us out here. It was good timing for a ski racing career—I had just qualified for the provincial team and got my eyes opened to what skiing on a big mountain was all about.

Whistler Insider: What do you remember of those first few years skiing here?

Rob: My sister had actually moved here the year before so she took me around and showed me some runs… that contributed to my success as a racer. But I remember meeting the types of people who would be the first to hike up peak to get those turns—there was no lift so you had to walk from the top of the T-bars up Little Whistler. Some of those people are still around, a lot of them were in the room last night. It takes a village to raise a child and I see that in the people who decide to make it work here, who choose to stay and share that passion and the verve for life that we have here. That core community is deep rooted.

Whistler Insider: You married a good mountain girl and your sons are in grades 4 and 5. What do you like about raising a family here?

Rob: I think there are so many life lessons you can learn through sport and that is a big part of what this valley embraces, that outdoor lifestyle. From survival skills out ski touring to teamwork, trust, how to challenge ourselves… this community embraces it all. My kids are still pretty young so we still get to just watch them grow and see what they enjoy doing. There are so many options here.

Whistler Insider: You’ve remained involved with the local ski racing scene since you retired. What is the race scene like now?

Rob: It’s taken a great step forward after the Olympics. The Training Centre on Ptarmigan Run is big and wide and we can close it off and manage it and keep it safe so you can rip as fast as you want. That is a big step forward, we can do a lot more with the kids now than in the past. At the same time, its’ getting a bit prohibitive in who can really afford it. If you have all the best gear and send your kids to summer camps in Chile then they will get better. I think it is that way with any sport.

Whistler Insider: Ski culture has changed a lot in the past 15 years, with freeskiing and park skiing. Are some ski racers being pulled towards those aspects of skiing?

Rob: It might be, but it also seems like freeskiing attracts the kids who aren’t interested in being on a team, the individualists. I think it’s more about personality types and hopefully all the kids end up getting to ski in a way they enjoy the most.

Whistler Insider: But either way, these mountains create great skiers don’t they?

Rob: I think they make a huge difference for anyone who grows up here. Once they venture off on their own they have to learn to look out for each other, learn mountain savvy and respect. And the variability in snow conditions helps them to become more versatile skiers and more able to adapt to whatever is on a race course. It’s cross training.

Whistler Insider: What’s your favourite thing about skiing, after all these years?

Rob: Wanting to go fast, faster than ski patrol will let you. I think it is the thrill of adventure, that adrenaline rush hasn’t changed and I don’t think it ever will.

Whistler Insider: What are your favourite groomers then?

Rob: Upper Dave, Lower Dave especially [Dave Murray Downhill]. Another good one on Blackcomb is when they groom Lower Gear Jammer it can be really good for a couple days. It’s a good ripper but watch out for the road in the middle.

Rob: I have a shoulder on the left side of Whistler bowl that doesn’t get skied that much. I also find that when you stay on the ridges you get good snow because other people will often turn off early.

Rob: Dusty’s for sure, that hasn’t changed. But I like Seppo’s too, up in the Roundhouse. That’s a good place to sit in the afternoon until you get kicked off the patio because it is closing.

Whistler Insider: What hasn’t changed since the old days?

Rob: Sushi Village, and I love it.

The next generation of ski racers will be in attendance at the Whistler Cup April 1 – 3, 2016. MIKE CRANE PHOTO

Rob: The Whistler Cup is pretty special, all the kids it brings here from around the world. Seeing young racers rip it, that is special to the Ski club and dear to my heart. The Hot Doggin’ party is also the best.

Whistler Insider: What’s one thing everyone should know before they come to Whistler?

Rob: Bring your rain cape and your sun shades. Spare gloves and sunscreen. You can get any kind of weather thrown at you here in the matter of a day, let alone a week. That is one of the things that makes it amazing, anything can happen here.

Come see what can happen for yourself at this year’s Whistler Cup, or take a run on the infamous Dave Murray Downhill. All the skiing info you need is at Whistler.com 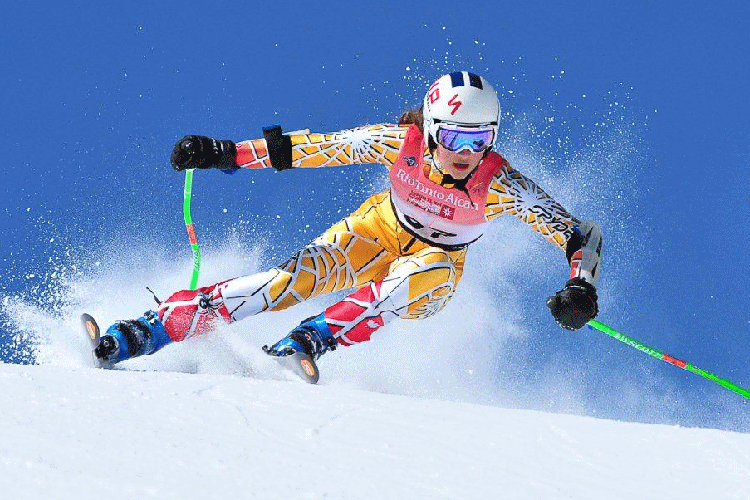