The History of Whistler Restrooms (and Whistler Skis too)

Skiing was invented thousands of years ago as a way to get from snowy point A to snowy point B. Around 1860 some genius looked at a pair of skis and decided, “Hey you guys, we can do this for fun too!”
And the rest is history.

And that history, or at least the local version of it, is on full display in the Whistler Museum’s new permanent exhibit “The Evolution of Skiing in Whistler.” (The History of Whistler Restrooms is a very small part of the exhibit, but it’s in there.)

“Skiing is obviously such a large part of Whistler’s history,” says museum programs manager Jeff Slack. “I only wish we had more space to tell more stories.”

Even so, the space they have is full of great local history and artifacts. Featuring a whole slew of new information panels on everything from Whistler’s first rope tow to the roots of local mountaineering to the Crazy Canuck ski racers the room is steeped in history.

“We even put up new wood on the walls to give that authentic chalet feel,” Jeff says, “but for sure the main draw here are the ski exhibits and the gondola cabin. Everyone loves to sit in the gondy.”

The original Whistler Gondola at Creekside opened in 1966 and the Museum’s cabin gives anyone a chance to sit inside a piece of that era and relive the glory of Whistler’s ski hill roots. nearby, the ski exhibit is a floor-to-ceiling glass case containing some of Whistler’s most storied planks.

“We have (Whistler pioneer) Myrtle Philip’s skis here,” Jeff says pointing to a pair of all-wood beauties. “We don’t know much about them except that they 100% for-sure belonged to Myrtle. She was a strong skier and we have a shot from 1916 of her and a guest skiing on Alta Lake.”

Next to Myrtle’s ski is early pioneer Walter Zebrowski’s 1930’s French Army-issued wooden skis that saw WWII combat action in Austria, Germany, France and Russia before finally ending up in Whistler when Walt moved here after the war and did a lot of recreational skiing in Garibaldi Provincial Park.

Whistler Mountain visionary Franz Wilhelmson’s 1960’s era planks are also on display. “These are made by a high-end Norwegian company called Bonna,” Jeff explains. “You can see the design is a lot flashier than Myrtle’s old wood skis. Franz was a wealthy man so these would have been the best skis money could buy at the time.”

The exhibit also includes the first twin-tip ski (1973 Atomics), a classic 80’s monoski and some 214 centimetre Fisher RC4’s like the ones Crazy Canuck Steve Podborski won the World Cup Downhill title on in 1982. The first prototype of Whistler ripper Eric Hjorleifson’s Renegade Ski from 4FRNT Skis represents the current fat-ski innovations. Hjorleifson designed the shape himself.

“There were a lot of tough decisions on what to show with just twelve feet of cabinet space,” Jeff admits. “We have a lot more stuff so we’ll be swapping out some of the skis and boards every three months or so. This is a permanent exhibit so that gives us the freedom to really show off the skis and stories Whistler has collected over the past 100 years.”

Snowboarding is represented with a 1991 Burton Craig Kelly Air, a board that really exemplifies everything that was cool about snowboarding’s rise in the early 1990s, as well as new carbon-weave splitboard designed and built right here in Whistler by Chris Prior and his team at Prior Snowboards.

The History of Whistler Restrooms is located, appropriately, in the restroom (“We have to use all the space we have,” Jeff says) while other display cases contain vintage season’s passes, staff uniforms, chairlift rescue rope crossbows and more.

The Whistler Museum is also featuring ski history-related live presentations and debates throughout the season. The next one is Sunday December 8 when a collection of Whistler’s ski and snowboard filmmakers come together to discuss our rich history in local Ski and Snowboard movie history. This one coincides with Mountain Culture Day of the Whistler Film Festival and takes place from 4-6 pm on Sunday December 8, 2014.

Get more info on all the Whistler Museum live presentations or this exhibit at their website. The museum is open daily from 11 AM- 5 PM. In the meantime, check out the videos below on the 1965 Construction of the Creekside Gondola and Eric Hjorleifson skiing on the exact pair of skis featured in the exhibit. 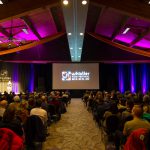 Whistler Backcountry– Know Before You Go