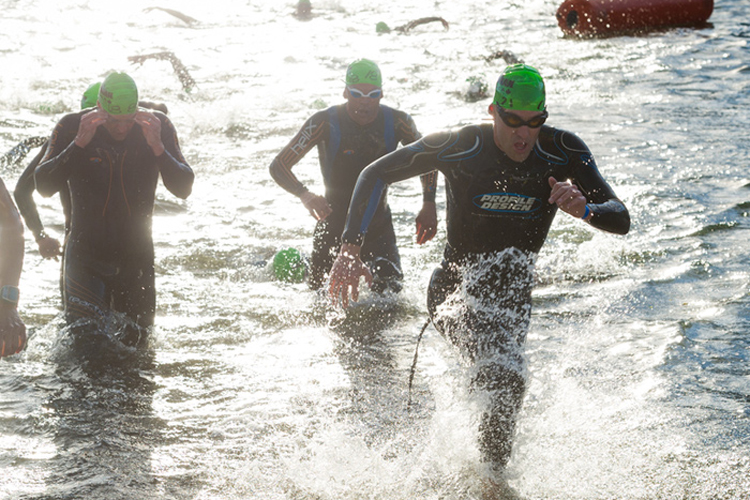 Whistler’s first ever Subaru IRONMAN® Canada took place last weekend and it was huge, with 2, 600 competitors and many thousands more spectators, family and cheerleaders. To get a better perspective on Whistler’s single largest event since the 2010 Winter Games The Insider sent two reporters out into the action to get the lowdown on an event that many are calling the most difficult race this valley has ever seen.

Dee Raffo is a local snowboarder/biker/adventure racing fan who volunteered herself and her mother as highway marshals for a segment of the bike leg of the Subaru IRONMAN® Canada. She put in a full day of spectating and filed this report:

5:45 AM. I strapped a camp chair onto my backpack, checked again that I had my cowbell, and rode out into the morning darkness. As I crossed the highway a yellow school bus passed by crammed with people on their way to the starting line, their breath fogging up the windows. The excitement in town was palpable.

German, Italian, English and French accents drifted through the crowd of spectators as I approached Rainbow Park for the start of the 3.8 kilometre swim. I was surrounded by kids, dogs, mums, dads, grandparents and people in novelty hats and fairy wigs. Milling about with the racers I asked a few how they were feeling and the top three words were: excited, anxious, and afraid. One woman started crying as we talked, the fear of failure obviously weighing heavily on her shoulders. The word that stuck with me most however was “grateful.” A woman explained how she was running for her father who had passed away the year previous and as the announcer scrolled through the list of names he mentioned cancer survivors, war veterans and trauma victims. I felt grateful too, grateful to witness this event in my hometown and showcase Whistler’s beauty to an inspiring crowd of people from around the world.

The start gun fired and the swimmers moved like a human wave across the water. Volunteers on kayaks, stand-up paddleboards and floats flanked the competitors. It was heard to tear myself away from the unfolding action but I had to get to my post on the bike course. We watched as the first rider crested the hill and soared past us on his way out to the Callaghan Valley. Of course we cheered, everyone did. Then a band of local children showed up drumming on pots and pans much to the amusement of athletes and spectators alike. It was an all-day atmosphere of fun and as the last riders began to trickle past we headed into the Village to catch the first people coming over the finish line.

Jeff Slack is a lifelong skier and lover of mountain culture and history. Usually found alone in the wilderness or manning the fort at the Whistler Museum, Jeff volunteered to work the late shift on the final aid station of the running segment and was close enough to the finish line to get a glimpse of the real drama a Subaru IRONMAN® Canada race can produce:

Unlike Dee, I was not there to witness the frenzy on Alta Lake. I wasn’t sure what to expect with Whistler’s first Subaru IRONMAN® Canada, but I knew I would be volunteering until after midnight, so I opted for sleep. After seeing the photos, I’m still kicking myself for missing the swim course, and will definitely be there next year.

Throughout the day as I caught the biking action from various points in the valley, it began to sink in: this is really big. Not just in terms of the sheer scale of the event but also how much it meant to the athletes and their friends and family who came to support. Motivational slogans written in chalk lined the sides of the run course. Support teams cheered like mad when their husband/mom/third cousin/complete stranger passed by, then immediately bolted to find the next spot where they could repeat the gesture. Whistler Village transformed into a massive party as the fastest Ironmen and women began crossing the finish line. By the time my volunteer shift was about to begin, I couldn’t help but be completely swept up in the energy and emotion of the event.

Dee Raffo– The entire village was buzzing with an energy I haven’t felt since the Olympics. With the action playing on the big screen in the plaza and the music blaring from the finish line it was certainly an action packed place to be. From the bleachers at the end I watched a woman cry as her husband kissed her before he went under the Timex finishing arch. I saw two kids run their mum in while complete strangers screamed themselves hoarse encouraging all the athletes over the last few metres. I spoke to one of the finishers who had never been to Whistler before. Hailing from the UK, he’d done his fair share of races but he said, “never one so beautiful.

Jeff Slack– My volunteer station was just over a kilometer of running (or skipping, walking, or limping depending on the participant) away from the finish line— so close we could actually hear the announcer’s repeated call “[insert name here] You. Are. An. IRONMAN!” Every few seconds you knew that someone else was celebrating one of the greatest triumphs of their life. As the athletes passed by I was overwhelmingly impressed by how unnecessarily polite they all were, smiling and cracking jokes, apologizing if a tossed water cup didn’t quite hit the garbage can. My favourite was a woman who asked for a towel and make-up kit to ensure, 225 kilometres later, that she LOOKED GOOD for the finish line.

As a testament to the athletes’ superhuman endurance, our two fully charged camera batteries couldn’t even last until the end, so I can’t produce a photo of the last Ironman®. Still, it was a highlight of the night to see her pass by at a brisk walk, half-smiling, half-grimacing. As we finally began packing up our station we got to hear the announcer’s triumphant mantra one last time, with a few minutes to spare before the midnight cutoff. It was a thoroughly inspiring, energizing, and entertaining day and I’m predicting a big jump in local competitors next year. We love a challenge here in Whistler and this one looked like too much fun to pass up. Start training.

Subaru IRONMAN® Canada will be back in Whistler for 2014 and beyond. For details on registration or coming to watch the fun hit up Whistler.com. 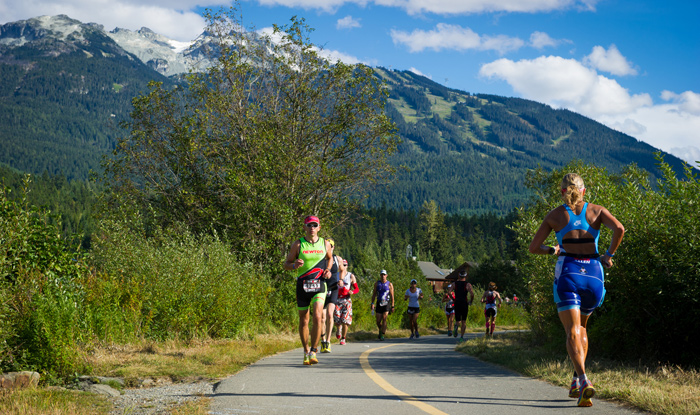 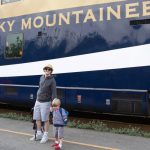 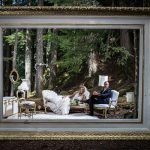