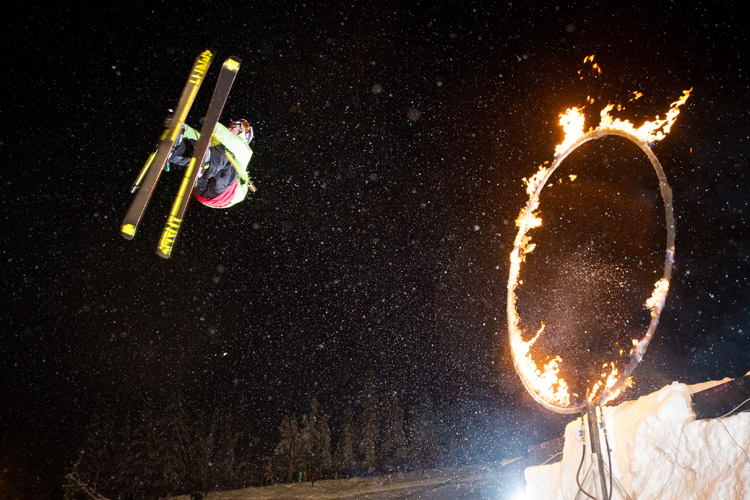 Editor’s Note: These are the 12 days of Christmas, Whistler-style so strap in and get ready for a week and a half of snow, excitement, twinkling lights, good times, great food and fantastic winter enjoyment. No Partridges, no pear trees (although there may be some tree skiing.) Happy Holidays.

A 45-foot ski jump is nerve-wracking to most people, toss in a flaming ring and a live audience and it gets downright terrifying. For the men and women of Whistler’s weekly Fire and Ice show, however, it’s just another day at the office. At least, it is once they get the first jump of the season out of the way. And the first show of the season is tonight!

At 6:30 PM tonight the inaugural Fire and Ice performance will take place on the lower slopes of Whistler Mountain (right beside the Garibaldi Life Co.) The stars of the show are Whistler Blackcomb ski school instructors, with a few pro-athlete ringers, who will take the skies and launch tricks through a 12-foot diameter flaming hoop as the crowd “oohs” and “awes” below.

The show is not as dangerous as it sounds, these people are professionals, and in over a decade of performances pro-skier Myles Ricketts is the only guy to ever actually hit the flaming hoop and crash. He escaped unscathed though, and now works as a coordinator on the event to make sure no one else suffers the same fate.

“We’ve got 5 new athletes this season who will be making their first jump tonight.” Myles says. “You’re definitely nervous the first time but it’s also really fun. You’re concentrating on the fire but once you get into the air you can’t really see anything anyhow so instinct and training take over.”

Complete with a new announcer this year, the Fire and Ice show is a must-see. Things kick off at 6:30 PM and although the show usually only occurs Sunday nights Myles says there is a special Fire and Ice planned for Whistler’s New Year’s Eve celebrations. Here’s a video to give an idea of what is in store.

This is the easiest one yet. A Whistler.com gift certificate can be used for almost anything on Whistler.com including transportation, accommodation and activities. 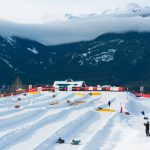 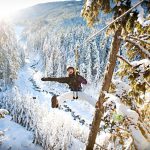