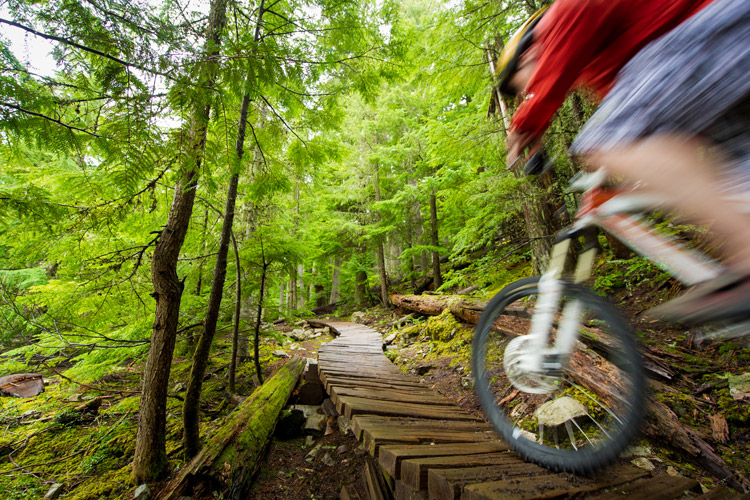 One of the best things about having a ski hill with a full vertical mile (1609 metres) of terrain to rip is that when spring hits Whistler we’ll see fresh snowfall up in the alpine but budding flowers and bare trails in the valley. This perfect mix of both seasons allows for something that has become known as “The Whistler Triathlon,” which is all about getting out and enjoying three (or more) different sports in one day.

This week The Insider hooked up with some outgoing Whistler locals to find out what their ideal “Whistler Triathlon” day looks like.

“I’d certainly go running,” says Whistler mayor Nancy Wilhelm-Morden. “Either out through my backyard and down onto the Valley Trail and out to Rainbow Park or out the front door and up the street to the Flank Trail on Rainbow Mountain. After that I’d go for a ski—the Blackcomb glacier is where I want my ashes spread so I’d go there— and then to finish off the day I think I would do some aerobic gardening. Mow the lawn, pull some weeds, lifting bags of dirt. That’s a great day to me.”

LEFT: Todd Lawson on his paddleboard. RIGHT: Mayor Nancy atop the Blackcomb Glacier.

“I’d wake up and get out around 9am for a paddle on my Stand Up Paddleboard around Alta Lake,” Todd says. “Then around 11 I’d head up skiing, probably rip around on Zig Zag for some nice mid-mountain corn. I’d finish that around 2pm and zip down to Pemberton for a round of golf at Big Sky.”
Pemberton’s elevation is 1600 feet below Whistler Village, so summer (and golf) starts earlier down there.

Voleurz photographer/filmer/biker Mason Mashon, a self-described “Freelance Lifestyler,” says his ideal day would start early with some backcountry snowmobiling. “Sledding up Brandywine to start, the road is so close to the alpine. After that I’d hit the hill, I prefer skiing and ripping fast cruisers. Then I’d bike, most likely in the bike park. Then après, of course.”

Biking is huge this time of year as everyone dusts off their trusty steeds and takes to the trails. Kevin Kobayashi and Scott Humby opened Fanatyk Co bike shop in 1995 and are true legends of the local bike scene, but even they still love skiing in the spring.

“The ideal multisport day would start with skiing for sure”, Koba says.
“Yeah, slush bumps over by Jersey Cream chair,” Scott adds. “Then come down around noon and have lunch. Then hit the bike park.”
“Yeah,” says Koba. “A few laps of A-Line and Dirt Merchant.
“Then a bike tour, linking some of the trails over on Westside road,” Scott chimes in. “A River Runs Through It and Kill Me, Thrill Me…”
“Yeah, link a few trails then go home,” Koba says, “and throw a salmon on the BBQ, have a few drinks with some friends.”
“Watch a hockey game and call it a perfect spring day,” Scott finishes. Both guys nod and smile and you can see the gears turning in their heads as plans are made for later in the week.

Jess Smith, a communications guru still struggling with the realities of an office job has a different kind of golf on her list. “Skiing first, for sure,” she says. “Seventh Heaven chair because it gets the most sun, but then I’d come down at midday and go Whiffle golfing in the woods behind my friend’s house. They have 9 holes back there, or maybe 12… Or Disc Golf is good too. Then a nice canoe trip from Lakeside Park over to Rainbow Park. Then après, does that count? Yes? okay that.”

Jess Smith (in the pool) seems to have spring in Whistler all figured out. Photo: jussigrznar.com

But it’s Whistler Golf Club group manager Ro Davies who took the perfect spring day survey the most seriously, he even included a breakfast recipe.

“I like oatmeal.” Ro says. ‘But not the kind I had as a kid so I step it up. I go berry picking every summer and freeze a lot of them so in the mornings I cook up some stone cut oatmeal and throw in black berries and strawberries, also almonds, cinnamon and my mom’s raisins from her vineyard back home. Then I add yogurt and almond milk. It’s a red/purple/sweet/filling good time.”

Ro Davies (far left) knows how to get the most out a spring day in Whistler.

Post breakfast Ro begins his ideal day, and it starts early. “I’d ride my bike to the golf course, the long way along the Valley trail so I can see the mist on the lakes. Then I’d hit the first tee time, get those fresh-cut greens and crisp new cups, the dew on the grass and most of the town is still asleep. It’s peaceful.”

“For lunch, I’d order it on the 17th hole, wrapped to go, then finish my round, grab the ski gear from the office and head for Blackcomb. A picnic at the top of 7th Heaven looking back at Whistler mountain. Spring skiing is fun because lots of people dress up in crazy costumes and just have a good time. I’d shred a few lines on 7th, then hit the Crystal zone and head down late, just before ski patrol does the sweep. It makes sense to have beer in the snow or a cocktail on the deck in there somewhere too.”

Sounds amazing right? And Ro’s just getting going. “then I’d ditch the skis, get back on the bike and go from commuter mode to more of a fun trail ride to wherever my lazier friends have set up the BBQ. Probably Lost Lake as it gets good late light in the spring. I’d jump in the lake to clean off the big day – it’s not that cold and you never know who you might have to impress — then eat and enjoy time with my friends until it starts to get dark. Then turn on the bike lights, important so I don’t hit a bear or skateboarder on the ride home, and finish the day off with a hot tub. Man I love spring.”

With days like that, who wouldn’t? And we haven’t even mentioned tennis, rock climbing, skateboarding, bocce, and the plethora of other fantastic things to cram into these long spring days. Use the comments section below to list your favourite version of the Whistler Triathlon. 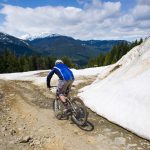 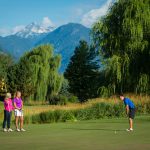 Local Tips for a Winter Ski Trip to Whistler

It Feels Like Fall: How Seasonal Scents Affect Your Emotions