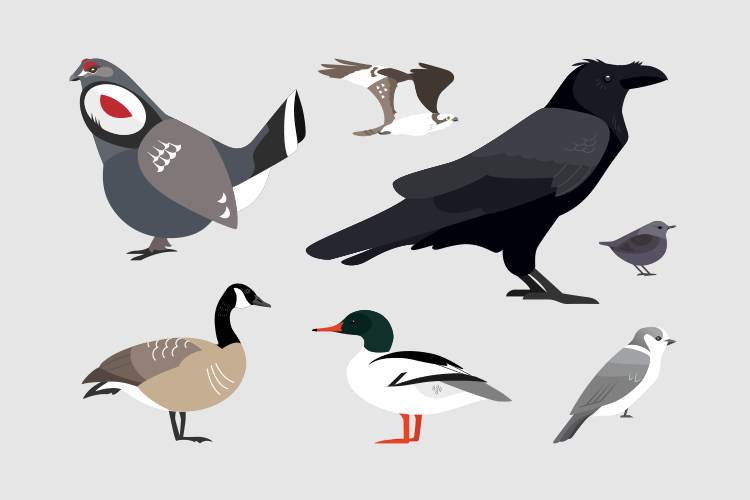 Chirp, chirp, chirp – the soundtrack to spring. It’s lovely being woken up by the sun and the birds, but which ones are visiting your yard, perching in the trees, lounging on the lake or rummaging in the bushes on your walk or hike?

We recently caught up with the Whistler Naturalists, who gave us some pointers for spotting ten of Whistler’s birds, a few of the movers and tail shakers in Whistler’s avian scene.

For birders and aspiring-birders who might be staying closer to home at the moment, there are plenty of feathered friends that can be found in your own backyard or outside the kitchen window. See if you can spot these two while you’re doing the dishes!

Chickadees are around in the spring and can often found in small groups. They love to flit from shrub to shrub and tree to tree. Look up! They might be “chickadee-dee-deeing” away in the foliage outside your own home.

Related to whiskey jacks, these birds are not as friendly as their cousins, but are every bit as intelligent. The Steller’s jay is the provincial bird of British Columbia, chosen as such in 1987 based on their popularity at the time.

With a bright blue body, black head and Mohawk crest, it’s easy to spot a Steller’s jay. They also have a loud, distinctive squawk, so it’s easy to hear one too. These birds love evergreen forests, so Whistler is their ideal home. The species’ habituation to humans means they don’t mind being around people and are easily found in backyards at any time of the year.

Other birds you can spot while backyard birding include red-breasted nuthatches, northern flickers, and American robins.

These birds like a nest with a view and can be found at higher elevations around Whistler. Look out for them as you hike and bike just below the treeline.

This cool little bird, which comes from the same family of birds as the crow, was chosen by Canadian Geographic magazine as the national bird of Canada in 2016 (although this was never formally designated) due to it being found in every province and territory. It actually appears on Whistler’s official coat of arms, chosen for its friendly nature.

Other names for this species include grey jay and Canada jay, although ask anyone in Whistler and you’ll hear locals singing the praises of the whiskey jack. They are very friendly and the more human-habituated ones might even come perch next to you (or on you).

Whiskey jacks are found at higher subalpine elevations up to the treeline. You might see them while skiing on Blackcomb Mountain or when hiking in areas like Logger’s Lake.

INSIDER TIP: Keep our birds wild! Photos of whiskey jacks eating directly out of a hiker’s hand are common on social media, but this is actually detrimental to the birds’ health and overall wellbeing.

Thump. Thump. An ominous drumming sound comes deep from within Whistler’s forests each spring. Is that a bear? Nope. That sound is from a male blue grouse trying to attract females by manipulating the large air sac on his neck (similar to how frogs croak).

Blue grouse is a general name for two subspecies – the sooty grouse and the dusky grouse. Whistler is home to both subspecies, which are very similar looking. These chicken-sized birds live in the subalpine forests around Whistler and spring is the best time to spot them, as the males are easy to hear.

Other bird species you might find up high include woodpeckers (pileated and three-toed), pine grosbeak or if you’re really lucky, a northern pygmy owl.

The River of Golden Dreams flows through a pristine wetland ecosystem where you can find some really interesting bird species. Spot some of these feathered friends around Whistler’s rivers and lakes.

It isn’t possible to get more descriptive than this bird’s name, the red-winged blackbird is black with a red flash on its wing (males only – females are mottled brown for camouflage). This one can be tricky to spot from a distance, but can often be seen perched among the rushes on the north end of Alta Lake, at the source of the River of Golden Dreams.

The Whistler Naturalists fund a viewing platform along the Valley Trail just a short walk north of Rainbow Park, which is a great place to watch out for these feisty birds. A male red-winged blackbird will have up to 10 females in his harem and defend them and their nests from predators with force by dive-bombing and swooping.

Small and well camouflaged, you can easily miss this little guy. The name more or less comes from the feeding habits of this bird, which dips its beak and dives underwater to feed on aquatic insects such as dragonfly nymphs and caddisfly. It might even feed on minnows or tadpoles given the chance!

If you’re trying to find one, look towards shallow water along Whistler’s riverbanks.

Other birds you might find in our marshy or sandy wetlands include sandpipers, great blue herons, or the small American pipit.

Where there are lakes and rivers there are waterfowl. Whistler has more than just your standard ducks, however, and situated along a major migration route for many species (the Pacific Flyway); we get many seasonal visitors.

We all know the iconic Canada goose (we added it as a bonus to the print sheet), but it’s not the only large, long-necked bird that frequents Whistler’s waters. A massive flock of trumpeter swans visits Whistler along their migration path each winter – they are huge, white and hard to miss.

Their breeding grounds are in Alaska and they make the migration to southern BC beginning in late September / early October. They can arrive as early as November, but numbers peak in January / February and are mostly gone by mid-March.

Trumpeter swans swim up and down the River of Golden Dreams from roughly February to April. As the ice on Alta Lake and Green Lake (at each end of the river) begins to melt, they venture farther out into the lakes before moving on. You can often hear their trumpeting before you see them as you approach the Valley Trail boardwalk along the edge of Green Lake (next to Nicklaus North Golf Course).

Mergansers are a type of diving duck. While Whistler is home to a few varieties of merganser, the common one is, well, the most common to see. Males and females have different plumage, but the females are certainly not boring to look at, unlike most duck species. While males are white with dark heads and backs, the females are greyish white with rust-coloured heads and the feathers on the females’ heads stick up to form a crest.

These birds are residents of the Pacific Northwest, but the best time to see them is in the middle of summer when females take their similarly coloured and nearly full-grown babies swimming back and forth on Alta Lake. Common merganser flocks have an eerie ability to dive under the water all at the exact same time and then pop up twenty metres away only thirty seconds later. It’s truly a sight to see when out canoeing or kayaking on the lake!

Other birds you might see out on the water are hooded mergansers, common loons (featured on the Canadian one-dollar coin), and of course, the Canada goose.

This section features two of our bigger birds who often cast shadows as they soar above us and are certainly synonymous with Whistler.

A raven is just a large crow, right? Well, not quite. First, ravens have triangular tails instead of the fan-shaped ones crows feature. Ravens are not just larger, they are much larger and produce a low, uneasy croaking noise instead of the caw of a crow. No wonder the raven features so prominently as the trickster in First Nations legends – these birds are eerily smart.

You’ll see ravens throughout Whistler Valley all year round – actually, you might see two as ravens often travel in pairs (they’re monogamous). They add extra ambiance to stormy, autumn days and often feature in Whistler artwork and photography.

Although Whistler is also home to hawks, falcons and eagles, we decided to feature the osprey. It has a white body with brown wings, piercing yellow eyes, and a set of enormous talons, which are used for gripping slippery, wriggling fish right out of the water.

As fish are the osprey’s main diet, summer is the best time to keep an eye on the sky. If you’re unsure what kind of raptor you are watching as it circles above, just wait a minute to see if you can witness the osprey’s impressive dive into the waters of Whistler’s lakes.

Other bird species you might see in and around the Valley include bald eagles, juncos, or even the occasional turkey vulture sunning itself on a rock north of town in the summer.

INSIDER TIP: Pause to take in your surroundings. The quieter you are and the more you pay attention to the finer details around you, the better your chances of spotting a smaller bird rustling through the undergrowth or a raptor perched on a treetop in the distance.

We suggest bringing up this guide on your phone when you’re out and about, however, you could also print it out – the illustrations are incredible, so we wouldn’t blame you if you even framed it!

The Whistler Naturalists have a full 15-page guide to Whistler’s birds and run monthly walking tours for locals and visitors to join. These are currently on hiatus, but the birds certainly aren’t, so keep a set of binoculars handy, stay a safe distance from other trail users and have fun spotting some of Whistler’s feathered friends as you explore.
Artwork by Nikkey Dawn.
Mountain CultureSustainability & Responsible Travel

Katy is BC born-and-bred. She originally moved to Whistler for a summer and slowly learned to appreciate winter as well. She hikes, paddleboards, crafts and is usually the first person people come to when they have a cute dog photo to share.