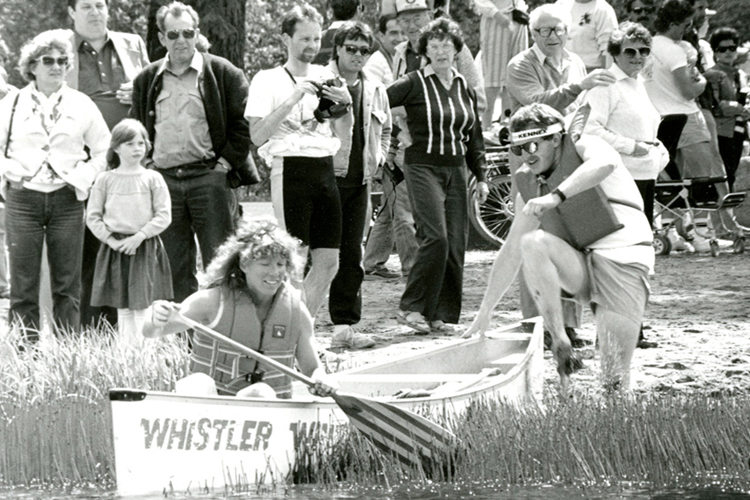 It was perhaps the toughest (and most beloved) team event in Whistler’s history and this May long weekend The Great Snow Earth Water returns after a 20+ year hiatus as part of GO Fest, Whistler’s new Great Outdoors Festival.

“It was a big community event,” recalls Bryan Walhovd, a Vancouver resident who organized the first Snow Earth Water Race way back in May of 1975. “At the end of the season a lot of us skiers would just sit back, watch the Gelandesprung jump competition and drink beer. I wanted to get something going that everyone could get involved with.”

So Bryan, who taught at the Whistler Ski School on weekends, conceived a team relay race that would begin at Whistler’s Roundhouse and traverse most of the Whistler valley before finishing back at the bottom of the “new” ski hill.

“It started with a mass-start ‘Chinese Downhill’ off the top of the mountain and people would ski to the snowline then run with their skis the rest of the way to the bottom,” Bryan explains. “The first year, you’d end up where Dusty’s is now and pass off to a cyclist who would race out to the beaver dam at the north end of Alta Lake. We had a bunch of canoes and you’d have to canoe back across the lake and pass off to a runner who would run back up to Dusty’s.” 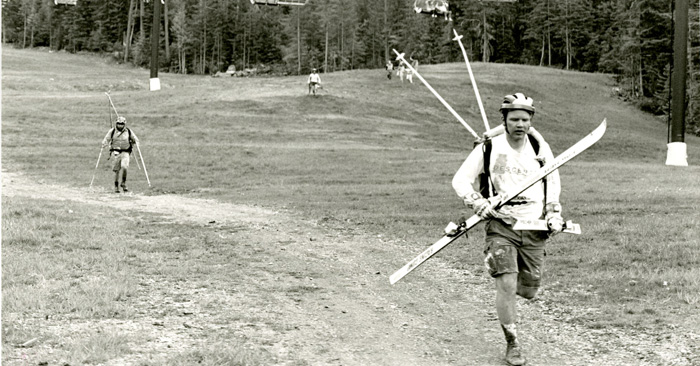 As a way to get the Whistler community together to celebrate the end of another ski season, The Great Snow Earth Water Race worked so well it was soon attracting thousands of people to town, including a Japanese contingent who arrived to race with their own film crew in tow.

“It was a pretty big deal,” Bryan says. “They had a televised contest in Japan to see who would come over here to compete and they were filming out of Whistler Heli Ski helicopters the whole time. Their team kind of got lost though, they needed a guide, but everyone had fun and I bet that was a big thing for bringing all the Japanese to town after that.”

Fun was always the top priority for the Great Snow Earth Water Race and, especially in the early years, there were not a lot of rules. “One of the funniest moments was when Nancy Greene was racing as a skier and once she ran out of snow she saw a young kid who had come up on a dirt bike to help his buddy get down faster. She told the kid, ‘your buddy can’t make it, I stepped in.’ and she got a ride right to the bottom. Then she told the kid he’d better head back up to get the poor buddy.”

Bryan oversaw the Great Race for 15 years, with all the proceeds going back into the community. One historical point of note is that Les McDonald, who organized Canada’s first Triathlon in Vancouver in 1981,was a Great Snow Earth Water racer in the 70s. “I think Les would have preferred we run the race as a singles event,” Bryan says, “but I told him it was a team event. Great to see Les take the triathlon concept such a long ways though.”

Eventually, insurance costs and bureaucracy became such a hassle that the Great Snow Earth Water Race faded away in the early 1990s. But now Whistler is abuzz about its return. “It’s going to be an exciting throwback to the old days of Whistler,” says Darren Kinnaird, who’s taking a break from his role as the mastermind of Crankworx to resurrect the Great Snow Earth Water Race for GO Fest. “The original races were before my time but I’m excited to see the community come together in that fun-loving, grassroots way that Whistler is famous for.”

The 2014 Great Snow Earth Water Race will feature an updated format: The race begins at the top of Garbanzo Chair and competitors will have to ski-tour up to the Roundhouse before handing off to a skier or boarder who will rip down to the snowline and pass off to a downhill mountain biker. Following a short bike climb and speedy descent through the Whistler Mountain Bike Park the next stage is a running section that leads through Whistler Village and along the Valley Trail to Rainbow Park. From there teams of two will navigate canoes down the River of Golden Dreams (at high water) and across Green Lake before the final leg, a cross country bike race through the Lost Lake trails back to the Village and the finish line.

“That new course and format sounds really good,” says longtime local artist Vincent Massey, who raced the Great Snow Earth Water multiple times in the 1970s and 80s. “The canoeing is always the most fun to watch, it’s like a demolition derby of hundreds of canoes. If you knew someone in another canoe you’d actively try to take them out and swamp them.” 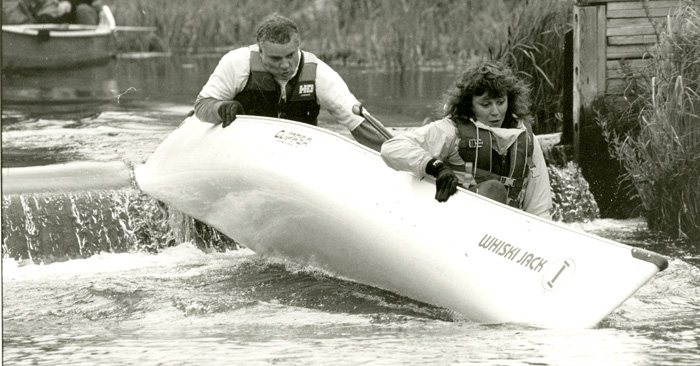 Both Vincent and Bryan say they are considering entering the reincarnated Great Snow Earth Water Race. “Back in the old days everyone entered,” Vincent says. “Whoever you skied with all winter was who you would race with, it was just what you did. I think I’d do the biking this year or the snowboard section, especially since you no longer have to run downhill lugging your gear.”

“I’m trying to put a team together,” Bryan says. “I’ve never actually competed in the race so it would be great to the old crew together and finally make a go of it. Just get out and have fun and be happy.”

Whistler GO Fest runs May 16-19, 2014 and features all kinds of free concerts and outdoorsy events like bike races, XC runs, disc golf and Ultimate tournaments, whitewater rafting, fishing and more. Get all the details at Whistler.com