Standing trail-side on Wednesday nights in Whistler along the pathways to Lost Lake is a little like watching a nation of hipster refugees migrating to their next camp, all a little confused about the weather they’re headed into – most are wearing some combination of flip-flops, shorts, hoodies and toques. They travel travel by bike and by foot. Most carry blankets, and something to keep them off the grass – ranging from folding camp chairs to inflatable double mattresses to dinghies used earlier that day to float on the lake. All are heading to one place – Lost Lake, to watch movies in the open air, under a starlit sky.

Lunafliks is one of Whistler’s coollest socially-transmitted phenomena. It’s operated by LUNA, Late Unique Night-time Alternatives, a group of local Whistlerites who have created low-cost alternatives to the pub and club scene.

I recommend a folding chair, a toque and a sleeping bag – it cools off pretty quickly after the sun goes down. Bring good friends and a little money to make the most of the hot meal that awaits. The Rotary Club of Whistler Millennium sells a delicious sausage and pop for $5 at their sunset BBQ, and LUNA also sells Jiffy Pop popcorn, a very entertaining experience! Or, you could stop by the new Wednesday night Whistler Farmers Market between 3pm and 7pm and pick up some fresh treats and picnic supplies.

Show up early (like 8:30 pm) to set up before it gets dark, watch the alpenglow, enjoy the great ambient DJ sets and get all settled in to your spot.

The paths to the beach are lit with little candles, and the whole lakeside experience takes on a magical feeling as the darkness falls, and the excitement of what feels like a giant sleepover kicks in.

The Lunafliks movies are hand-picked each season for maximum enjoyment, so sit or lay back, enjoy the cinematography and the shooting stars at the most awesome outdoor film experience I’ve ever had.

There are only five chances to see the films, every other Wednesday starting July 6, with the final film screening August 31. Films are preceded by a PechaKucha talk, where an innovative idea is explained in a brief speech accompanied by an illustrative slideshow of images.

Getting There I recommend walking or biking the short distance from the Village along the beautiful Valley Trail, or taking the WAVE shuttle that runs frequently. If you are staying in a hotel, your hotel shuttle can drop you off and pick you up. There is limited parking at Lost Lake.

What is it? It’s like a drive-in without the cars, it’s like a giant movie theatre without the seats. It’s like a day at the beach but at nighttime. There is a giant inflatable screen onto which the films are projected, and behind the screen is the lake and mountains. When the sky gets dark enough, the movie starts. 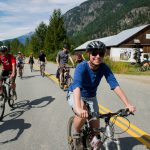 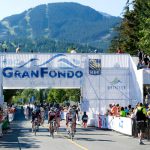